It appears that Pakistani-origin British boxer Amir Khan has thrown his weight behind his wife in her public spat with his family, but has threatened to cut both her and his family out of life if the ‘silly’ squabble continues

In a carefully worded issued statement on his social media accounts, Khan appeared to be siding with his wife, stating: “I have supported my wife, and that’s because she was in the right. Since I’ve been married I’ve seen how my family and siblings have treated her. It wasn’t fair.

“It was a private matter and should’ve kept private.”

Expressing his frustration over the role played by his family, he said that “My siblings were posting on social media over and over again. I have asked my father to have them remove it and no one listened to me.

“I was patient and kept quiet but FARYAL said she couldn’t take it anymore and had to speak up. So she did.” 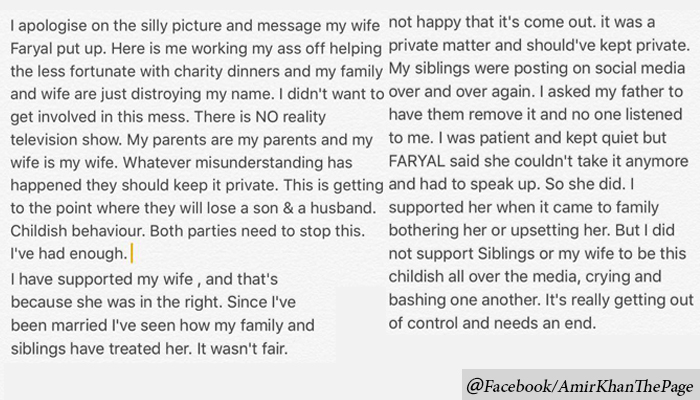 However, Khan fell short of supporting his wife on this issue unconditionally, as he maintained that though he supported his wife when it came to ‘family bothering her or upsetting her’, “But I did not support Siblings or my wife to be this childish all over the media,crying and bashing one another.”

“Its really getting out of control and needs an end,” the statement said.

On Twitter, the former unified lighter-welterweight world champion posted : ”I apologise on the silly picture and message my wife Faryal put up,” he added, “here is me working my ass off helping the less fortunate with charity dinners and my family and wife are distroying (SIC) my name.”

Categorically denying the news claimed by a British tabloid that the family row is build up for a Kardashians-style reality show called, ‘Home With The Khans’.

“There is NO reality TV show,” Khan stated.

Calling the family spat as a ‘childish behaviour’ and calling on both the parties to end the feud, Aamir said: “My parents are my parents and my wife is my wife. Whatever misunderstanding has happened they should keep it private. Both parties need to stop this. I’ve had enough.”

In their first interview to Geo News, since the domestic dispute made headlines in the international media, Khan’s parents rubbished her allegations, claiming they never so much as laid a hand on her and treated Faryal like their own daughter.

“Faryal was adopting a dress code which in the Islamic faith was not acceptable. I am a father to two daughters whom I have treated exactly the same way as I have treated Faryal,” said Sajjad Khan, speaking exclusively with Geo News at his home in Bolton.

Sajjad told Geo News, he never said anything to Faryal, but did express his concerns to his son over her pictures in such dressing which she shared on social media.

“All this started with the issue of dressing. We kept asking Amir to tell her not to adopt such a dress code. And even if she had to wear such dresses, please don’t post it on social media,” he said.

Amir’s mother Falak said she once asked Faryal not to wear such clothes but she did not listen.

“I asked her not to wear such dresses and to take the dupatta (scarf), but she never listened. After that, we asked Amir but he told us to convey this to Faryal’s mother because she does not listen to him either,” she said.

Falak Khan said that Faryal did not mix up much with the Khan family. “One day she will also complain that Amir Khan abuses her,” said the boxer’s mother.

Faryal took to Snapchat to hit back

In response to the statement of Khan`s parents, Faryal said ‘U (sic) can fake tear. But you can’t fake proof. I have a mother too, who’s cried. Just because she’s not done it in the public to look innocent doesn’t mean she doesn’t have a heart.

‘Soon I’ll reveal everything, I hate liars! And I will keep speaking up.’

The next message read: ‘You can be a robber, a thief, a murderer but as long as you’re a “mother” and you cry, people will sympathize … whether you’re lying or telling the truth? How unfair!’ 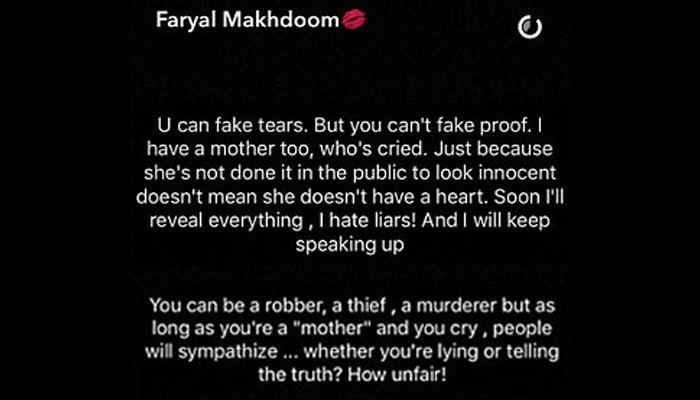 The third Snapchat said: ‘After all, the biggest issue is my dressing?! What the actual f….. my biggest issue is NOT getting accepted and going through 3 years of hell and that’s ok? Because? What disgusting thinking. TYPICAL.’

‘I was bullied for three years’

Pakistani-origin boxer Amir Khan’s wife also said that she was bullied by her in-laws for three years, but now she has had enough.

In an interview to British newspaper Sun, Faryal Makhdoom, 25, alleged that her in-laws cropped her out of family photos, hurled a remote control at her and even slapped her.

She alleged that her in-laws broke the locks of room while she was away on a romantic break. The couple shares a house in Bolton with mum Falak, dad Shah, brother Haroon, 25, and sister Mariyah, 19

The catwalk model added that her in-laws had problems with her baring skin.

Faryal said that her sister-in-law threw a remote control at her, and cropped her out of the family photos. 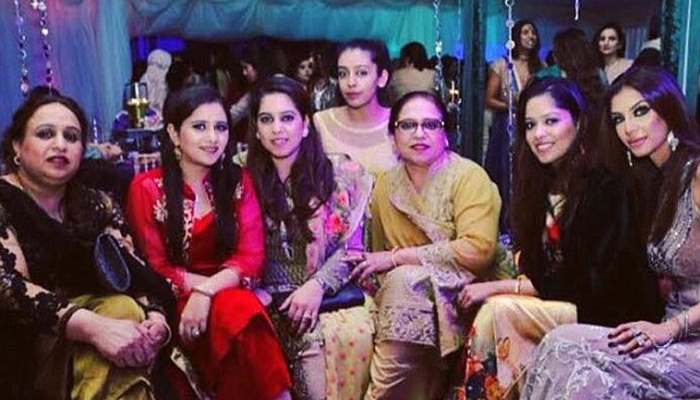 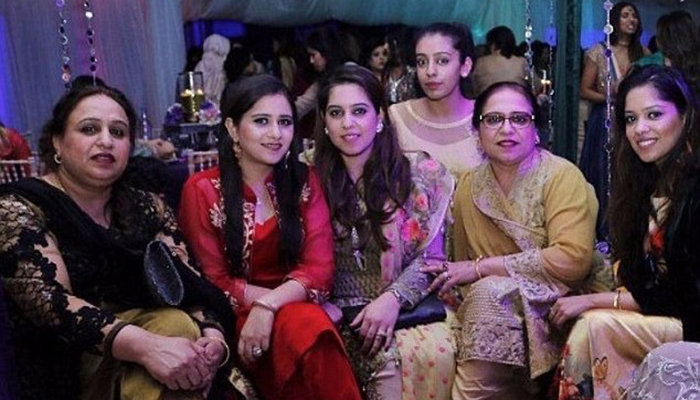 The photo was cropped to take Faryal out