“We spotted about 10 big objects and many more small white-colored objects which we could not photograph,” Indonesian air force official Agus Dwi Putranto told a press conference. 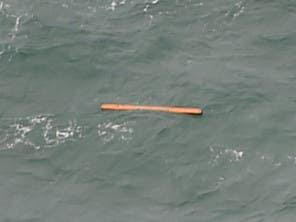 This aerial view taken from an Indonesian search and rescue aircraft over the Java Sea shows floating debris spotted in the search area. (AFP)

“The position is 10 kilometers from the location the plane was last captured by radar,” he said. 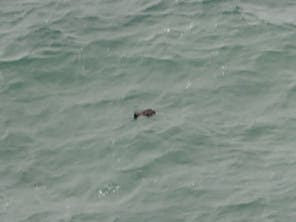 He displayed 10 photos of objects resembling a plane door, emergency slide, and a square box-like object.

An AFP photographer on the same flight that spotted the debris said he had seen objects in the sea resembling a life raft, life jackets and long orange tubes.

At least 30 ships, 15 aircraft and seven helicopters were looking for the jet carrying 162 people, said Indonesia’s Search and Rescue Agency chief Henry Bambang Soelistyo. Most of the craft were Indonesian but Singapore, Malaysia and Australia contributed to the effort. Aircraft from Thailand planned to join Tuesday’s search. 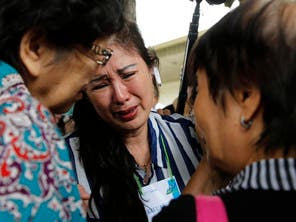 Relatives of passengers onboard AirAsia flight QZ8501 cry in a waiting area at Juanda International Airport in Surabaya December 29, 2014. (Reuters)

The U.S. Navy  is also joining the search. It said in a statement that the USS Sampson, a destroyer, which was already on an independent deployment in the Western Pacific, and will arrive in the area later Tuesday. China announced that a navy frigate already on patrol in the South China Sea and aircraft to help the search. 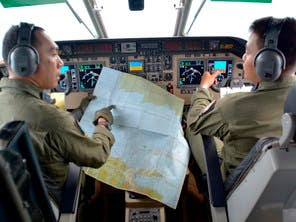 Australia is leading the ongoing search for Malaysia Airlines Flight 370 which disappeared in March, triggering many false reports and rumors, and Foreign Minister Julie Bishop cautioned on speculation surrounding the AirAsia flight.

“There will be many reports over the next little while as the search and rescue operation gets under way and continues, but until such time as we have actual verification, I’m not going to speculate on these issues,” she said.

The AirAsia pilots had been worried about the weather and had sought permission to climb above threatening clouds. Air traffic control couldn’t say yes immediately – there was no room. Six other airliners were crowding the airspace, forcing Flight 8501 to remain at a lower altitude. 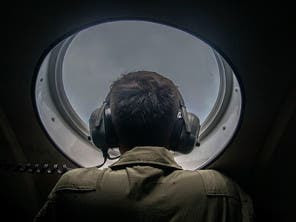 A member of the Indonesian military looks out of the window during a search and rescue (SAR) operation for missing Malaysian air carrier AirAsia flight QZ8501. (AFP)

Minutes later, the jet was gone from the radar without issuing a distress signal. The plane is believed to have crashed into Indonesia’s Java Sea, but broad aerial surveys so far have turned up no firm evidence of the missing Airbus A320-200.

On Monday, searchers spotted two oily patches and floating objects in separate locations, but it was not known any of it was related to the plane that vanished Sunday halfway into what should have been a two-hour hop from Surabaya, Indonesia, to Singapore. The area is a busy shipping lane. Officials saw little reason to believe the flight met anything but a grim fate.

Based on the plane’s last known coordinates, the aircraft probably crashed into the water and “is at the bottom of the sea,” Bambang Soelistyo said Monday. Still, searchers planned to expand their efforts onto land on Tuesday.

A storm alone isn’t going to bring down a modern plane designed to withstand severe weather. But weather paired with a pilot error or a mechanical failure could be disastrous.

Pilots rely on sophisticated weather-radar systems that include a dashboard display of storms and clouds, as well as reports from other crews, to steer around dangerous weather.

“A lot more information is available to pilots in the cockpit about weather than it ever was,” said Deborah Hersman, former chairman of the U.S. National Transportation Safety Board. But the technology has limits and sometimes information about storms “can be a little bit stale.”

“However, we cannot be sure whether it is part of the missing AirAsia plane,” Putranto said.

An Associated Press photographer flew in a C-130 transport carrier with Indonesia’s Air Force for 10 hours Monday over a large section of the search area between Kalimantan and Belitung. The flight was bumpy and rainy at times. It flew low, easily spotting waves, ships and fishermen, but there was no sign of the plane. 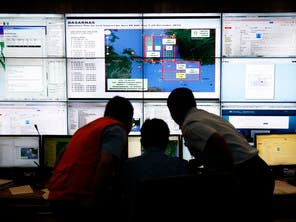 Authorities monitor progress in the search for AirAsia Flight QZ8501 in the Mission Control Center inside the National Search and Rescue Agency in Jakarta December 29, 2014. (Reuters)

Nearly all the passengers and crew are Indonesians, who are frequent visitors to Singapore, particularly on holidays.

Ruth Natalia Puspitasari, who would have turned 26 on Monday, was among them. Her father, Suyanto, sat with his wife, who was puffy-eyed and coughing, near the family crisis center at Surabaya’s airport.

“I don’t want to experience the same thing with what was happened with Malaysia Airlines,” he said as his wife wept. “It could be a long suffering.”

Few believe this search will be as perplexing as the ongoing one for Flight 370, where what happened onboard remains a total mystery. Authorities suspect the plane was deliberately diverted by someone on board and ultimately lost in a remote area of the Indian Ocean. Flight 8501 vanished over a heavily traveled sea that is relatively shallow, with no sign of foul play.

The captain, Iryanto, who like many Indonesians uses a single name, had more than 20,000 flying hours, AirAsia said.

People who knew Iryanto recalled that he was an experienced military pilot, flying F-16 fighters before shifting to commercial aviation. His French co-pilot, Remi Plesel, had been in Indonesia three years and loved to fly, his sister, Renee, told France’s RTL radio.

“He told me that things were going well, that he’d had a good Christmas. He was happy. The rains were starting,” she said. “The weather was bad.”