WASHINGTON: Hundreds of thousands of women, many wearing bright pink hats, marched in Washington on Saturday in a mass show of opposition to U.S. President Donald Trump’s agenda the day after the Republican businessman-turned-politician took office.

The Women’s March on Washington was one of a series of street protests throughout the country and the world against the new president’s often angry, populist rhetoric.

Trump has angered many liberal Americans with comments seen as demeaning to women, Mexicans and Muslims, and worried some abroad with his inaugural vow on Friday to put “America First” in his decision making.

The flood of people on Saturday appeared to be larger than the crowds who turned out the day before to witness Trump’s inauguration on the steps of the U.S. Capitol.

More than two million people flooded the streets of US cities on Saturday in a peaceful day of women-led protests a day after the inauguration of President Donald Trump, according to estimates from march organizers. 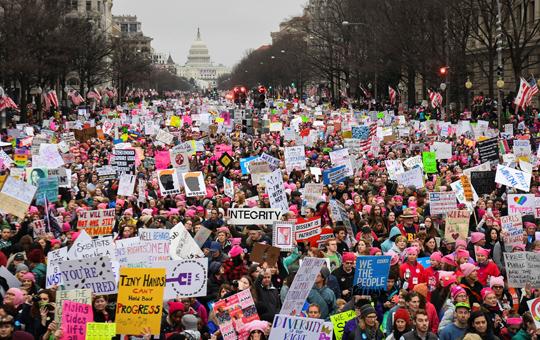 At the main “Women´s March on Washington” organizers told AFP they estimated the turnout at one million, with huge crowds joining sister marches around the country — and tens of thousands more marching worldwide.

It was not possible to independently verify the claim as the US capital does not release crowd counts. Metro operator WMATA told the Washington Post it had moved a record 470,000 passengers in the hours leading up to the march, a weekend ridership record.

More than half a million people also swarmed the streets of Los Angeles in one of the largest rallies by protesters, who fear that progress on gender equality, contraception and abortion could be chipped away under Trump.

LAPD spokesman Andrew Neiman said his department was still working on a crowd estimate but he told AFP it was certainly larger than a pro-immigration march which drew 500,000 in 2006. The Los Angeles march´s organizers claimed a turnout of 750,000.

March organizers in New York also claimed a crowd count of half a million, tweeting: “This is what democracy looks like! Over 500k people are here at @womensmarch!”

The Chicago Tribune reported that 150,000 rallied in the city, although the figure was not confirmed by police.

And in Boston, local media cited Mayor Marty Walsh´s office as estimating the crowd between 135,000 and 150,000 people.

Huge gatherings were also reported in Miami, Denver and Seattle and Philadelphia, just a few of the dozens of sister marches planned around the country.

Tens of thousands more took to the streets of London, Paris and other cities in solidarity with the US marchers.

It stressed the city’s Metro subway system, with riders reporting enormous crowds and some end-of-line stations temporarily turning away riders when parking lots filled and platforms became too crowded. 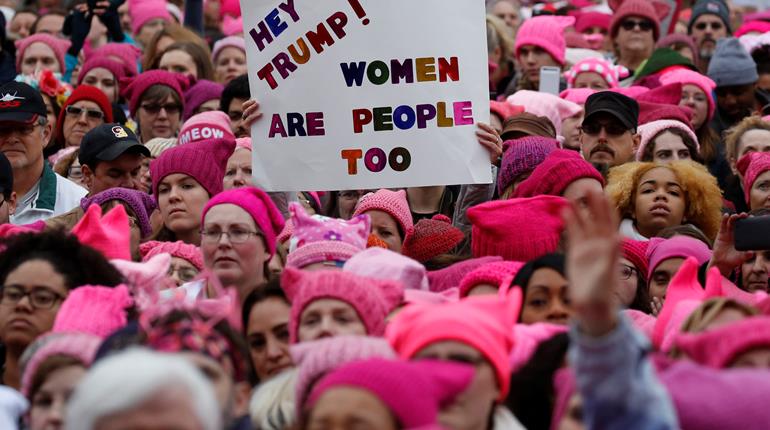 By midday Saturday the protest rally had been peaceful, a sharp contrast to the day before when black-clad anti-establishment activists smashed windows, set vehicles on fire and fought with riot police who responded with stun grenades.

The protests illustrated the depth of the anger in a deeply divided country that is still recovering from the scarring 2016 campaign season. Trump defeated Democrat Hillary Clinton, the first woman nominated for president by a major U.S. party.

Bonnie Norton, 35, and Jefferson Cole, 36, brought their 19-month-old daughter Maren to the march.

“We’re just disturbed by everything Trump wants to do,” Norton said. Cole said he was pleased Friday’s violence had not been repeated.

Thousands of women took to the streets of Sydney, London, Tokyo and other cities in Europe and Asia in “sister marches” against Trump. Women in U.S. cities also protested on the streets.

Although his party now controls both the White House and Congress, Trump faces strong public opposition as he takes office, a period that is typically more of a honeymoon for a new president. 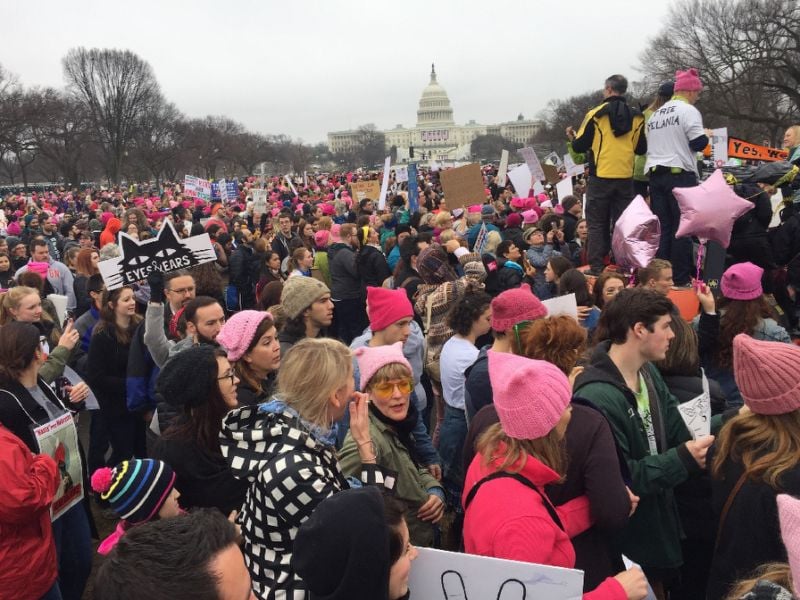 A recent ABC News/Washington Post poll found Trump had the lowest favorability rating of any incoming U.S. president since the 1970s.

Many protesters on Saturday wore knitted pink cat-eared hats, a reference to Trump’s claim in the 2005 video that was made public weeks before the election that he grabbed women by the genitals.

The Washington march featured speakers, celebrity appearances and a protest walk along the National Mall.

In the crowd was former U.S. Secretary of State John Kerry, who waved to supporters as his walked his yellow Labrador dog, Ben. 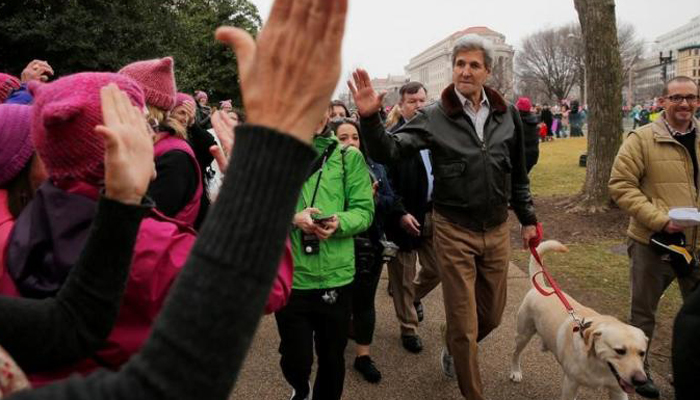 Across town, Trump began his first full day as president at an interfaith prayer service in the Washington National Cathedral. The event is traditionally held the morning after inauguration.

He wrote on Twitter on Saturday that “I am honored to serve you, the great American People, as your 45th President of the United States!” but made no mention of the protests.

Crowds filled more than six city blocks of Independence Avenue in downtown Washington, with more people spilling into side streets and additional marchers pouring into the area before midday.

The Washington Metro subway system sent a service alert warning of “system-wide delays due to extremely large crowds.” At least one station temporarily closed to new passengers because of the crowds backed up on the platform. 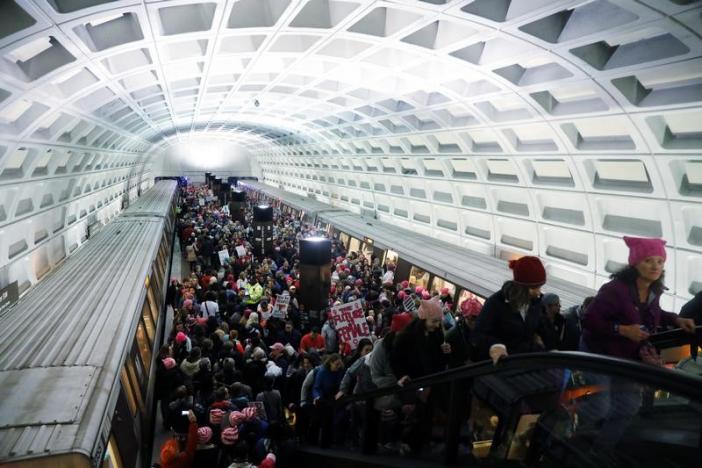 Elizabeth Newton, 59, traveled from Lafayette, California, to attend the march and stayed overnight in Baltimore. When she and her friends arrived at a rail station in that city to try to board a train to Washington, they were overwhelmed by the crowds.

“It was all the way around the block and partway around again. It was extraordinary,” Newton said. She and her friends instead opted to spend $106 on a Uber ride in to the city.

Trump offered few if any olive branches to his opponents in his Friday inauguration speech.

“He has never seemed particularly concerned about people who oppose him, he almost fights against them instinctively,” said Neil Levesque, executive director of the New Hampshire Institute of Politics. 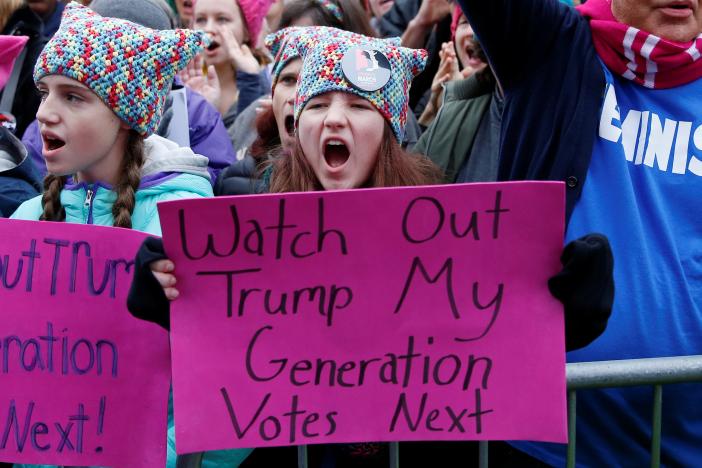 The lawmakers who Trump will rely on to achieve his policy goals including building a wall on the Mexican border and replacing the 2010 healthcare reform law known as “Obamacare” may be more susceptible to the negative public opinion the march illustrates, Levesque said.

“Members of Congress are very sensitive to the public mood and many of them are down here this week to see him,” Levesque said.

Jesse Carlock, 68, a psychologist from Dayton, Ohio was attending her first protest in decades.

“Once Mr. Trump was elected, I decided I needed to get active again, and I hadn’t been since the 60s and 70s,” Carlock said. “I’ve got to stand up and be counted as against a lot of what President Trump is saying…about healthcare, immigration, reproductive rights, you name it.”

Madonna made an unannounced appearance Saturday in Washington to join hundreds of thousands of people rallying for women´s rights in defiance of President Donald Trump.

“Welcome to the revolution of love,” she said as she took the stage, wrapping up hours of speeches by celebrities and rights activists. “To the rebellion. To our refusal as women to accept this new age of tyranny.”

Sporting a black hat, the 58-year-old singer spoke at the mass demonstration in a star-studded line-up that included the likes of feminist icon Gloria Steinem and actress Ashley Judd.

“We are not afraid. We are not alone. We will not back down,” the Madonna told a huge crowd — the overwhelming majority of them women, many donning pink hats. 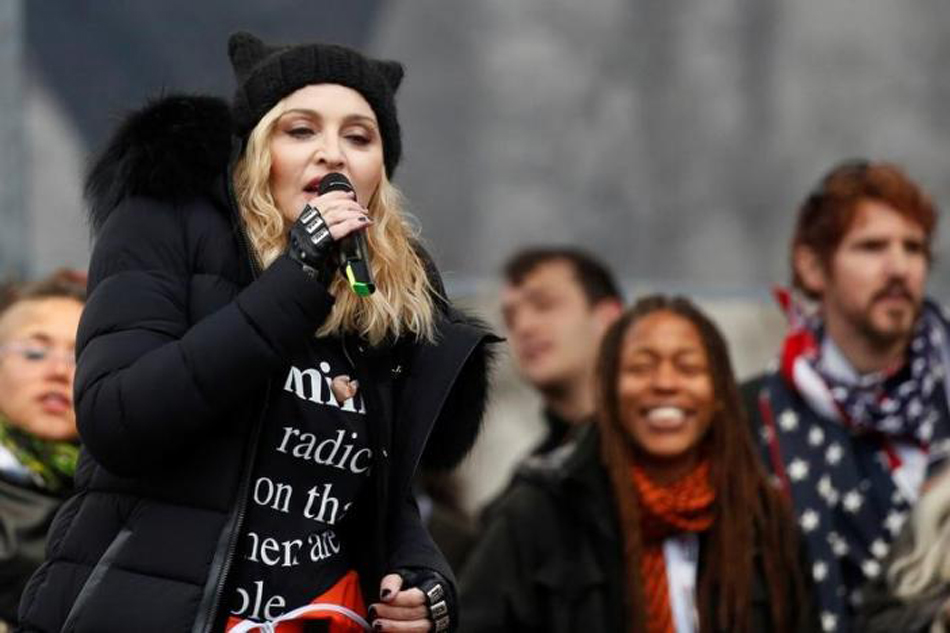 “There is power in our unity and that no opposing force stands a chance in the face of true solidarity.”

Madonna had campaigned for Hillary Clinton in her bid to become America´s first woman president, and told Billboard Magazine after the Democrat´s loss that women had a “tribal inability” to accept a female president.

“Women hate women. That´s what I think it is,” she had told the music magazine.

At Saturday´s march, her language took on a more revolutionary — and sometimes expletive-filled — tone.

“It took us this darkness to wake us,” she said. “Good did not win this election but good will win in the end.”