KARACHI: The textile industry, which earns 60% of total export proceeds, was jubilant on acceptance of a long pending demand of a massive cut in input costs and vowed that it would double the exports in the next five years.

The Pakistan Tehreek-e-Insaf (PTI) government, which is in the phase of reshaping economic policies, announced on Tuesday a reduction in regulatory duty on the import of raw material by the export industry, especially for the five zero-rated sectors.

The cut in duty on 82 items would give a benefit of Rs5 billion to the textile industry in remaining months of the current fiscal year 2018-19.

This is in addition to the Rs44-billion benefit the industry, especially that located in Punjab, is being provided through gas subsidy to make the utility price uniform across all four provinces in the country.

Finance Minister Asad Umar, while presenting the Finance Supplementary (Amendment) Bill 2018 in the National Assembly, said nearly 500,000 workers were jobless in Faisalabad and machinery was being sold at the price of scrap. 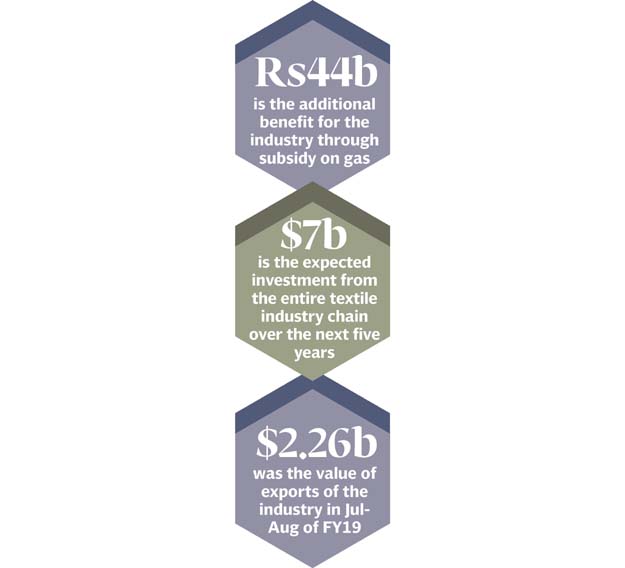 “We wanted to revive it (textile industry). We have, therefore, provided Rs44-billion benefit for the textile industry in Punjab so that they can retain their competitiveness among regional countries. We will also work to ensure more benefits for the zero-rated sectors in our electricity policy,” Umar said.

“The announcements from the government will help in reviving the $3-4 billion textile industry in Punjab,” All Pakistan Textile Mills Association (Aptma) Secretary General for Punjab Chapter Anisul Haq told The Express Tribune.

“Besides, the entire textile industry chain (starting from raw material manufacturers to value-added textile units) is estimated to invest around $7 billion over the next five years,” he said.

“The targeted revival of the industry along with new investment will help double textile exports in the next five years.”

The industry earned $13.53 billion in export proceeds in the previous fiscal year ended June 2018 that came to around 58% of total exports of $23.22 billion in the year, according to the Pakistan Bureau of Statistics (PBS).

In the first two months (July-August) of the current fiscal year, the industry fetched $2.26 billion in exports or 62% of the total export proceeds of $3.66 billion.

He elaborated that the gas tariff has been set at Rs600 per million British thermal units (mmbtu) for the entire textile industry across the country irrespective of the fact that the industry utilises locally produced gas or the imported one (RLNG or Re-gasified Liquefied Natural Gas). Earlier, industry in Sindh was using locally produced gas priced at Rs600 per mmbtu, while the same industry in Punjab was mostly utilising RLNG whose current tariff stands at Rs1,520 per mmbtu, he elaborated.

“The government has also promised on the National Assembly floor on Tuesday it would reduce electricity tariff for the industry to the regional competitive level,” Haq added. Besides, the government is also working on an export package separately as well, he remarked.

Topline Securities said in a commentary on the mini-budget “reduction on regulatory duty on imported inputs of textile is positive for textile companies.”

To note, in its commitment to increase exports, the government did not increase gas prices for the textile sector in Monday’s Economic Coordination Committee meeting, it added.