ISLAMABAD: Hitting back at those who are questioning Pakistan’s credentials in the fight against terrorism, army chief General Qamar Javed Bajwa on Wednesday asked the world to do more and warned that the entire region would be destabilised if Pakistan’s counter-terrorism campaign fails.

In a speech delivered at General Headquarters in Rawalpindi to mark Defence Day, the chief of army staff (COAS) forcefully defended Pakistan’s gains against terrorism while vehemently dismissing allegations of double-crossing anyone. 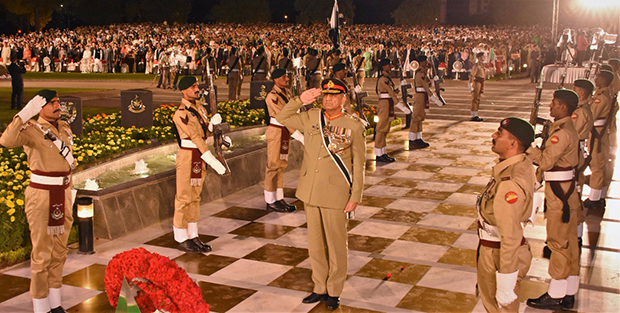 “If Pakistan has not done enough against terrorism, then no country in the world has done enough,” the army chief insisted while saying that now the time had come for the world to do more.

Pakistan has been in the spotlight ever since US President Donald Trump unveiled a new strategy for Afghanistan and South Asia. Trump, while seeking a greater role for India in Afghanistan, accused Pakistan of supporting and harbouring the Afghan Taliban and the Haqqani Network.

Against this backdrop, the army chief had a clear message for the United States.

“The sentiments of the people are quite clear on the current state of relationship with the US. We don’t need aid. We want to be treated with respect and trust. Our efforts and sacrifices need to be acknowledged,” he asserted.

But he also reiterated the state’s desire to maintain a good relationship with the US and NATO. “We will support every single US and NATO initiative that leads to peace in the region in general and Afghanistan in particular,” he said, while noting that Pakistan’s security concerns should also be addressed, referring to the growing Indian role in Afghanistan, which Pakistan believes could be counterproductive.

Pakistan has long suspected India of using Afghan soil to foment violence in the country.

Gen Bajwa said that if the world could not help and assist Pakistan in its campaign against terrorism, at least it should not cast aspersions.

“Credit goes to Pakistan that with limited resources, it has achieved phenomenal success in the war against terrorism,” the army chief maintained.

He said the war that was imposed on Pakistan would be taken to its logical conclusion.

The army chief made it clear that only the state could sanction ‘jihad’, and that right must be exercised by the state. He urged detractors to shun the path of violence, reminding them that their act was “not jihadbut fasaad” (terrorism).

He said the army was working with the government and other institutions to introduce new reforms as without such initiatives, the National Action Plan (NAP) against terrorism would remain incomplete.

On Afghanistan, the army chief said Pakistan had done much more than its capacity. This, he added, did not mean that Pakistan would fight the Afghan war on its soil. He stressed that there was a clear line as to the extent Pakistan could cooperate with its neighbor.

“We have made sincere efforts for talks and peace. However, Afghanistan is a sovereign country which is independent and takes its own decisions,” he said.

He said that if Afghan factions opted for the path of war, Pakistan would not become party to it. He said Pakistan was taking steps to secure its side of the porous 2,600km border with Afghanistan. “We are fencing the entire border and establishing over 900 posts,” he said, while also recommending the repatriation of Afghan refugees in an orderly manner.

He also touched upon the importance of the China-Pakistan Economic Corridor (CPEC). “CPEC not only guarantees peace and prosperity for Pakistan, but for the entire region.”

The army chief said Pakistan was keeping an eye on the ‘enemy’ which was trying to create instability in Afghanistan. “I want to tell all the anti-state elements that Pakistan is fully aware of their ulterior motives and is ready to fight the menace of terrorism.”

“We are proud of the people of Balochistan who have rejected terrorism and separatism outright.”

He said one of the main objectives of the enemy to foment violence in Balochistan was to undermine CPEC and jeopardise Pak-China friendship.

“We are against war and terrorism. We want relationship with all countries based on mutual respect and equality.”

He said everyone could see India’s excesses in Occupied Kashmir and its role in the disintegration of Pakistan. “[India’s] plans now include openly supporting terrorists and usurping our water resources.”

He said it pained Pakistan to see the current unrest in Indian Occupied Kashmir, and that the future of millions of people living in Pakistan and India was linked to prosperity and long-term peace.

But to achieve that objective, it is necessary for there to be an immediate end to the bloodshed across the Line of Control, he stressed.

The Army chief said India must realise that the youth of Kashmir did not need outside help or assistance to carry out their ‘peaceful struggle’ for the right to self-determination.

“This is in the interest of India. Instead of abusing Kashmiris and using guns against Pakistan, it must opt for political and diplomatic solutions to the longstanding Kashmir dispute,” he argued.

He said Pakistan would continue to extend political, moral, and diplomatic support to Kashmiris for the right to self-determination in line with the UNSC resolutions.

The army chief said Pakistan was a responsible nuclear state and made it clear that it was not the country which started the nuclear arms race in South Asia, referring to India’s 1974 nuclear test.

“Our nuclear program is just a deterrent against the enemy that imposed this unconventional war on us.”

He said that today, efforts are being made to resolve all issues through better understanding and wisdom, whether it be establishing peace in FATA, the development of Balochistan, relationships with regional countries, or any international issues. “[The armed forces] provide full input to state institutions as Pakistan’s prosperity and future is linked to the strengthening of institutions.”

Earlier, he paid a glowing tribute to war veterans and those who lost their lives fighting for the motherland in the 1965 Indo-Pak war.

Web Desk
Previous ArticleRasool Cyan joins PIA as its latest CEO
Next Article Pakistani soil not being used against any country, says Dastagir