DUBAI, United Arab Emirates (AP) — Having scaled the heights of Earth with the world’s tallest tower, the United Arab Emirates is now aiming for the stars, or just a little bit closer, with an ambitions trip to Mars. The energy-rich country on the eastern tip of the Arabian Peninsula announced plans Wednesday to send the first unmanned Arab spaceship to Mars in 2021.

The ruler of the UAE’s emirate of Dubai, Sheik Mohammed bin Rashid Al Maktoum, said the mission will prove the Arab world is still capable of delivering scientific contributions to humanity, despite the many conflicts across the Middle East.

“Our region is a region of civilization. Our destiny is, once again, to explore, to create, to build and to civilize,” said Al Maktoum, who is also UAE’s vice president, in a statement.

For years, the UAE has been pushing Arab League nations to create a pan-Arab space agency similar to the European Space Agency.

The government did not say how much the program is expected to cost, but said the space agency would report to the Cabinet and be financially and administratively independent otherwise.

The UAE said that its unmanned probe will take nine months and travel more than 37 million miles to Mars (60 million kilometers), making the emirates one of only nine countries with space programs to try and explore the red planet.

A UAE Cabinet statement said the project aims to advance human knowledge and develop Emirati human capital and economy, but did not list specific scientific goals for the probe. 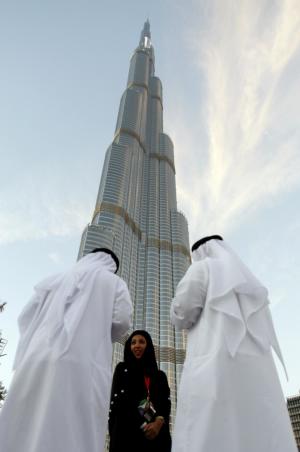 FILE – In this Jan. 4, 2010 file photo, Emirati officials prepare for the opening of Burj Khalifa, t …

The journey is complicated and many missions to Mars have failed. Countries first trying to launch into space usually fail more often than they succeed and that’s just getting into Earth’s orbit. Getting to Mars is the hardest job for even veteran space countries. Russia — the first country to go to space — failed frequently with landers, got one ship to land but only got 20 seconds of data.

The world’s overall success rate in Mars missions since the 1960s is less than 50-50. NASA has the best success rate at around 70 percent. It has sent 21 missions to Mars since the 1960s, and all but six have succeeded. The U.S. is the only nation so far to land and operate long-term an unmanned ship on Mars.

The UAE, which is comprised of seven emirates, says that its investments in space technologies already exceed 20 billion dirham, or roughly $5.4 billion. That includes investments in satellite data, mobile satellite communications and earth mapping and observation.

The Cabinet statement said the space technologies industry is estimated to be worth around $300 billion globally, and is increasingly important to the security of nations.

For hundreds of years up until the mid-13th century, Islamic advancements in science and technology experienced a golden age, but later fell behind. The ruler of the emirate of Abu Dhabi and UAE President Sheik Khalifa bin Zayed Al Nayhan said the Mars probe “represents the Islamic world’s entry into the era of space exploration.”

Iran sent a monkey into space for the second time last year, returning it safely to earth, and says it aims to send an astronaut into space.

There have also been several Muslim astronauts from around the world. Saudi-born Prince Sultan bin Salman Al-Saud became the first Muslim and Arab to travel to space in 1985.

Meanwhile, Egypt became the first Arab country to launch its own communications satellite in 1998, dramatically transforming the broadcasting landscape in the region.

The Dubai ruler said his country chose the epic challenge of reaching Mars because it inspires and motivates.