Hackers unleashed a complex attack on the internet through common devices like webcams and digital recorders and cut access to some of the world’s best known websites on Friday, a stunning breach of global internet stability.

The attacks struck Twitter, Paypal, Spotify and other customers of an infrastructure company in New Hampshire called Dyn, which acts as a switchboard for internet traffic.

The attackers used hundreds of thousands of internet-connected devices that had previously been infected with a malicious code that allowed them to cause outages that began in the Eastern United States and then spread to other parts of the country and Europe.

“The complexity of the attacks is what’s making it very challenging for us,” said Dyn’s chief strategy officer, Kyle York. The U.S. Department of Homeland Security and the Federal Bureau of Investigation said they were investigating.

The disruptions come at a time of unprecedented fears about the cyber threat in the United States, where hackers have breached political organizations and election agencies.

Friday’s outages were intermittent and varied by geography. Users complained they could not reach dozens of internet destinations including Mashable, CNN, the New York Times, the Wall Street Journal, Yelp and some businesses hosted by Amazon.com Inc.

Dyn said attacks were coming from millions of internet addresses, making it one of the largest attacks ever seen. Security experts said it was an especially potent type of distributed denial-of-service attack, or DDoS, in which attackers flood the targets with so much junk traffic that they freeze up. 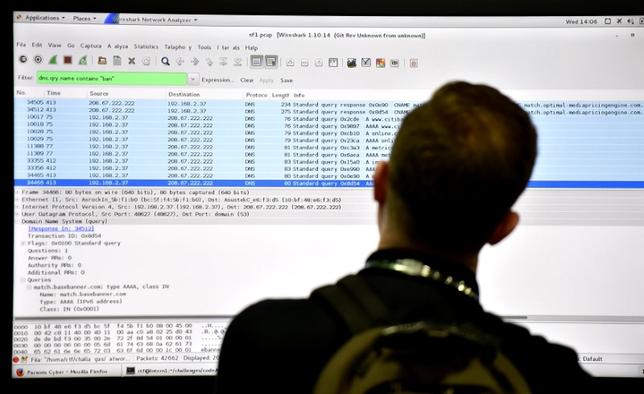 An attendee looks at a monitor at the Parsons booth during the 2016 Black Hat cyber-security conference in Las Vegas, Nevada, U.S. August 3, 2016. REUTERS/David Becker

Dyn said that at least some of the malicious traffic was coming from connected devices, including webcams and digital video recorders, that had been infected with control software named Mirai. Security researchers have previously raised concerns that such connected devices, sometimes referred to as the Internet of Things, lack proper security.

The Mirai code was dumped on the internet about a month ago, and criminal groups are now charging to employ it in cyber attacks, said Allison Nixon, director of security research at Flashpoint, which was helping Dyn analyze the attack.

Dale Drew, chief security officer at communications provider Level 3, said that other networks of compromised machines were also used in Friday’s attack, suggesting that the perpetrator had rented access to several so-called botnets.

The attackers took advantage of traffic-routing services such as those offered by Alphabet Inc’s Google and Cisco Systems Inc’s OpenDNS to make it difficult for Dyn to root out bad traffic without also interfering with legitimate inquiries, Drew said.

“Dyn can’t simply block the (Internet Protocol) addresses they are seeing, because that would be blocking Google or OpenDNS,” said Matthew Prince, CEO of security and content delivery firm CloudFlare. “These are nasty attacks, some of the hardest to protect against.”

Drew and Nixon both said that the makers of connected devices needed to do far more to make sure that the gadgets can be updated after security flaws are discovered.

The Department of Homeland Security last week issued a warning about attacks from the Internet of Things, following the release of the code for Mirai.

Attacking a large domain name service provider like Dyn can create massive disruptions because such firms are responsible for forwarding large volumes of internet traffic.

Dyn said it had resolved one morning attack, which disrupted operations for about two hours, but disclosed a second a few hours later that was causing further disruptions. By Friday evening it was fighting a third.

Amazon’s web services division, one of the world’s biggest cloud computing companies, reported that the issue temporarily affected users in Western Europe. Twitter and some news sites could not be accessed by some users in London late on Friday evening.

PayPal Holdings Inc said that the outage prevented some customers in “certain regions” from making payments. It apologized for the inconvenience and said that its networks had not been hacked.

A month ago, security guru Bruce Schneier wrote that someone, probably a country, had been testing increasing levels of denial-of-service attacks against unnamed core internet infrastructure providers in what seemed like a test of capability.

Nixon said there was no reason to think a national government was behind Friday’s assaults, but attacks carried out on a for-hire basis are famously difficult to attribute.