Search
HomeNewsNational
By Web Desk on May 5, 2018 National News

Turkey’s Chief of General Staff General Hulusi Akar visited the Air Headquarters in Islamabad on Friday and lauded the Pakistan Air Force’s (PAF) role in fighting the war against terrorism and expressed his desire to learn from its experiences.

Gen Akar was received by Chief of the Air Staff, Air Chief Marshal Mujahid Anwar Khan upon his arrival in the country earlier today, said a statement issued by the PAF.

“A smartly turned out contingent of Pakistan Air Force presented the Guard of Honour,” it added.

Later, the distinguished guest called on the Pakistani air chief at his office, where both the dignitaries remained together for some time and discussed matters of professional and mutual interest. 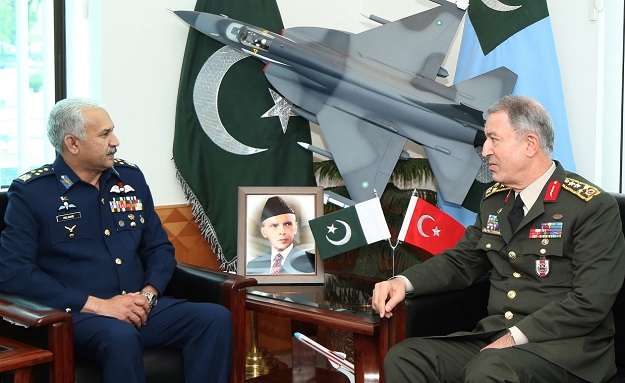 The Turkish military chief appreciated the sound professionalism of PAF personnel and lauded the role of the country’s air force in fighting the war against terrorism.

Air Chief Marshal Khan highlighted that both the countries enjoy cordial and brotherly relations and reiterated his resolve to further enhance the existing cooperation between the two countries. He also assured continued support in the field of aviation and military training to Turkish Air Force.