KARACHI: Technological evolution is reshaping the world around us. From how we communicate to how we travel or what we eat, everything has changed. And cricket is not immune to this change.

Pakistan’s remarkable performance to lift the ICC Champions Trophy is the most talked about thing in the world of cricket at the moment.

As incredible as Pakistan’s rise to the top has been, Intel’s cricket bat sensors, introduced in this tournament, have been just as much so — and in the long run it might even have a much more lasting impact on cricket.

According to the description on the Intel’s website, the sensor measures eight classifications of a batsman’s swing, including back lift angle, follow-through angle, impact angle, maximum bat speed, bat speed at impact, time to impact, and 3D swing and plane path. 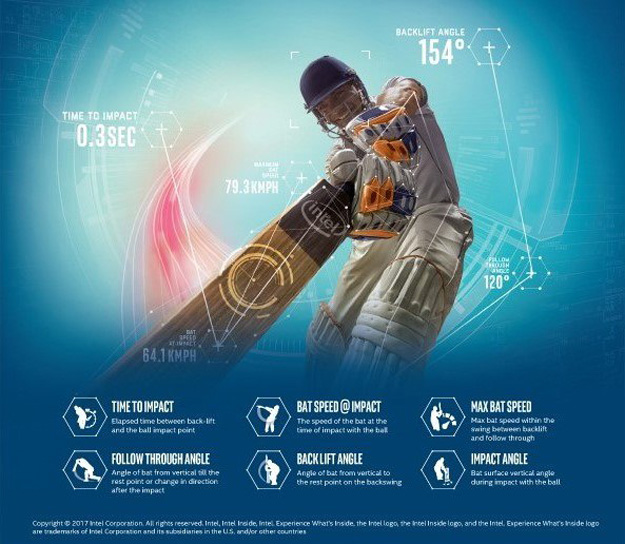 Attaching the sensor is really simple. Just roll the grip of bat down a bit and put the bottle cap sized sensor on the bat’s handle, roll back the grip and you’re done. The fact that the sensor weighs less than an ounce and stays at the bat’s handle means it doesn’t affect the player’s batting in any way.

And it has already been earning rave reviews, with former England skipper Nasser Hussain saying the sensor has been a wonderful addition to the game

Explaining how it can come in handy, Hussain said the latest technology helps quantify things that were not possible to measure on the field before, such as back-lift, bat speed and impact time.

“It picks up various things on the bat, for example back [lift]angle. Someone like Hashim Amla will have big back angle or when Mahendra Singh Dhoni plays the ‘helicopter shot’, he’s gonna have a big back angle.”

It also helps understand how certain batsmen change their strategy when playing against different bowling attacks. “When Virat Kohli plays seamers, he plays with firm wrists and doesn’t create much bat speed. But when he plays against the spinners, he really generates a lot of wrists and bat speeds through the ball. What we have actually been able to do is quantify that,” explained Hussain.

“So from this little bit of technology in the bat, we’re picking up whole different bits of information about how good batsmen are and how well they hit the cricket ball,” he added.