She hails from Abbottabad and achieved this feat on 21 February 2018 and this will go down in history as winter summit by this big heart little girl.

We congratulate her and her father Yousaf Khawaja for this huge achievement. Selena has plans for Manglik Sar and Spantik in near future.

Selena Khawaja with her father

ecalling a fearful experience from the latest triumph, Selena said, “At 5,000 metres, I felt slight altitude sickness but my training and the support of my father helped me overcome it soon.”

Selena who has been titled ‘Mountain Princess’ by Pakistan’s mountaineer community, has now set her eyes on three peaks: Mingling Sar (6,050 metres), followed by Spantik Peak (7,027 metres) and then the Broad Peak (8,051 metres) which is the 12th highest mountain in the world. “I aim to climb all these peaks this year,” Selena said.

But it doesn’t stop there. In 2019, when she is 10, Selena aims to “become the youngest girl to reach the top of Mount Everest”. An Indian girl Malavath Poorna ascended the Everest peak in 2010 when she was 13.

The student of grade five at Talking Heads International School with a passion for outdoor activities started physical training at the age of eight in the mountains of Miranjani and Makra. “I have scaled Miranjani at least 45 times and it is nearly 3,000 metres high,” the nine-year-old said. “And summited the 4,000-metre Makra Peak around 3 times,” she added.

Selena and her father are inspired by cricketer-turned-politician Imran Khan. “Aim so high that your goal seems impossible then work hard and achieve your goal — these words of Imran Khan motivate me and Selena to aim for Mount Everest,” her father shared in an interview.

“Mount Everest was an impossible dream for an 8-year-old kid, but now we are on our way to achieve the goal within two years and will attempt it in 2019,” he added.

While the mountaineer community has welcomed the feat, some have raised concerns about safety of kids at such altitudes. However, Selena’s father, a fitness trainer, believes he has trained his daughter physically and takes special care of her diet. “At age nine, she is way more fit than a casual 20-year-old,” he csaid.

Selena through her summits, wishes to inspire young kids to, “Aim high, work hard and achieve your goals.”

Shimshal is nestled deep in Hunza Valley, sharing a border with China’s Xinjiang region. It is a beautiful mountainous village located in Gojal, and the highest settelment in Hunza-Nagar District, in Gilgit-Baltistan. It lies at an altitude of 3,200m above sea level. The total area of this valley is approximately 3,800 km2

It is the largest village of Hunza valley. Its mighty mountains, gigantic passes, amazing glaciers, fertile landscape, and lush green fields are comparable to none. The largest herds of yaks, sheep and goats in its vast pasture lands; Shimshaal Pamir, Gujerav, Yazghail and Loopghar are a major fascination for tourists. The beautiful Shimshaal Pamir lake attracts many tourists toward it. The Lok Versa Museum of Shim-shal has some rare antiques, artifacts, musical instruments, and daily life items made from wood show cases the creativity and rich history of local community. Don’t miss visiting this heritage museum whenever you are around 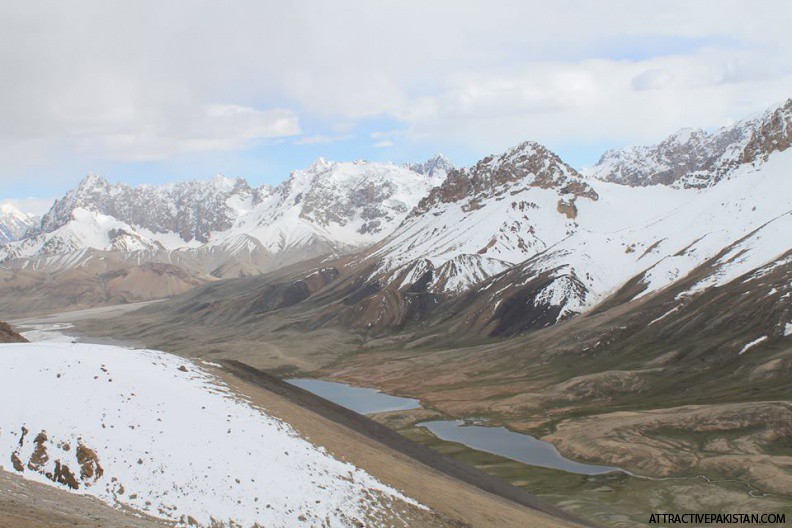 Not an easy place to reach, the road to Shimshal passes through a narrow, winding gorge, which is surrounded by dangerous peaks. It is inhabited by animals including the Blue Sheep and Marcopolo. The valley is reachable in small vehicles on an unpaved, narrow road. The road’s winding design, providing stunning panoramic views, is very curvy and fun for a leisurely ride, so it pays to take it slow. For half of the way, the road is on a man-made ledge hundreds & hundreds of feet above the river, on the near vertical side of the gorge. As you approach Shimshaal look for a glimpse of Adver Sar (6400m), also known as Shimshal Whitehorn.

The road to Shimshal leaves the KKH at the snout of the Batura Glacier, 6km north of Passu. It crosses the Hunza River on a suspension bridge and then enters the narrow gorge of the lower Shimshal-River; a more ominous gateway would be hard to imagine. After about an hour of negotiating a shifting, cliff-hugging jeep track and crossing a couple of daunting bridges you arrive at Dut, a reafforested oasis with no perman­ent settlement but a few huts for shepherds and road workers. Soon after Dut the valley opens out, closes in again, and glaciers approach the road. It’s hard to picture more awe-inspiring and stark scenery. Flowing off the lofty white mass of Destaghil Sar (7885m), Mulungutti Glacier ­descends right to the road. It takes maximum three hours to reach by jeep from Passu.

Shimshal Trek (September 2015)
First trek i moved, this Very Shimal trek ..me some where here in this snap

Shimshal Pass (4,735 m) rises above the village. It lies on the watershed between the Indus River and Tarim River basins, and leads to the valley of the Shimshal Braldu River, a tributary of the Shaksgam River on the border with China. The pass is not part of Khunjerab National Park, but the Shimshaal community has set an organization called SNT (Shimshal Nature Trust) which oversees the entire region and takes care of its own land. It is a community-based organization and is registered with the Government of Pakistan. Annually, in the last week of July or the first week of August, there is a festival at Shimshal Pass, where locals partake in a yak race, followed by singing and dancing. In Wakhi language it is called Woolyo. This yak race is the only one of its kind, and is a unique event organised at high mountain settlements of Pakistan.

It is the largest adventure area in Hunza and is a major attraction for tourists. Its mountains like Distaghil Sar (7,885 m), Shimshal White Horn (6,303 m) Minglik Sar (6,150 m), Lupghar Sar (7,200 m), Yazghail Sar (6,000 m), Kunjut Sar and others are well known among mountaineers. Gigantic glaciers include Malangudhi, Yazghail, Khurdopin (5,800 m), Braldu, Odver, Ver Zharav, and main passes are Chafchingoal, Khurdopin, Mai Dur, Braldu, Boi Sam and others.  It is also called as “The Valley of Mountaineers”. 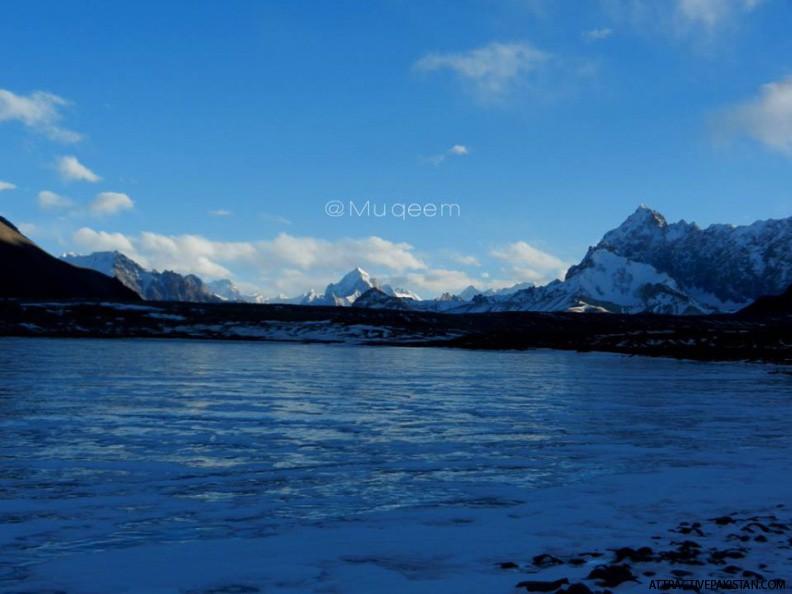 Shimshal (January 2015)
That evening when the temperature was (-25), we were standing above 4735m & enjoy the view of frozen

The venture is an ultimate challenge for the passionate trekkers. Nature comes into full play as you trek through Minglik Sar and Shipodeen pass. The scurfy route, rugged mountains, snow capped peaks, lush green valleys and pastures make the trek even more enthusing and interesting. You will naturally experience a boost in your feelings as the natural aura changes and captivates you every few minutes. Trekking round the famous Shim shal Pass, Minglik Sar and Shipodeen pass is akin to venturing into a hypnotic world that has the best experiences to offer you.

The village is excellent as a staging post for climbing and adventurous trekking and locals are particularly friendly and welcoming. Immediately south of the village is the Hispar Muztagh which contains the biggest Karakoram peak away from the Baltoro Muztagh in the form of Distaghil Sar (7885m). Elsewhere are other mammoths such as Kunyang Chhish (7852m), Trivor (7720m) and Pumari Chhish (7492m). To the north are the Ghujerab Mountains which are some of the least explored in the Karakoram extending to the Chinese border. This was the region referred to as the ‘Blank on the Map’ by Shipton. Even today, many maps still do not survey the peaks of this area properly.