MOSCOW: Russian grain is flowing around the world in a way not seen since the last years of the Tsarist empire a century ago but the country’s export expansion looks set to hit a wall because of a lack of infrastructure.

While Russia has increased its capacity to export grain ninefold over the last 15 years even that impressive increase will not be enough to keep pace with its 2017-18 grain harvest which is expected to be a record 133 million tonnes. Out of that crop, 44.5 million tonnes are earmarked for export, up from 37.7 million a year earlier, according to SovEcon consultancy.

Analysts and officials say that’s about as much as the country’s infrastructure can cope with for now. “If it was not the issue of infrastructure we would be able to ship over 50-55 million tonnes,” said Andrey Sizov, managing director of SovEcon, one of leading agriculture consultancies in Moscow.

Still, 45 million tonnes of wheat, maize, barley and other grains is already a marked improvement since Russia resumed grain exports in earnest in the early years of the 21st century. In 2000-01, for example, Russia only exported about 1.3 million tonnes of grain, according to USDA data.

The surge in Russian exports has contributed to a global grain glut. The world’s wheat market is set for a fifth surplus in a row in 2017-18 with stocks climbing to a record 268 million tonnes, according to U.S. Department of Agriculture data.

World wheat prices, meanwhile, have steadily declined. The Chicago Board of Trade’s wheat futures contract hit $9.16 a bushel in November 2012. It is now trading at $4.21 and fell below $4 in September last year for the first time since 2006.

Russia is also set to overtake the United States as the world’s biggest wheat exporter this year – regaining the top spot it last held before World War One – and cement its leading position over other major wheat exporters such as the European Union, Canada, Australia and Ukraine. In a search for new markets for its grain, Russia has been building up exports to Asia countries such as Bangladesh and Indonesia, muscling in on markets traditionally supplied by Australia. Russia has also boosted grain exports to Morocco and several other markets traditionally supplied by France, taking advantage of a poor French crop last year. 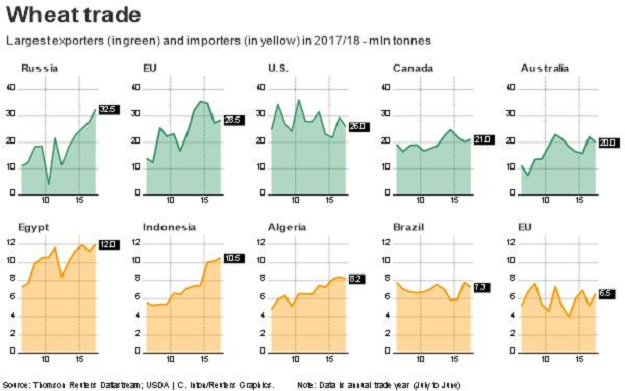 But fears Russia’s exports will keep on rising look overdone, at least for the coming few years, given the practical constraints preventing it shipping even more of its rapidly increasing grain stocks, farmers and analysts said. “There will be tough situation with port and transport infrastructure capacity this year, especially in the first half of the season,” said Dmitry Rylko, head of the Institute for Agricultural Market Studies (IKAR) consultancy.

In the Soviet era, the country was mainly an importer of grain for domestic consumption and to supply its large dairy and meat industries – and much of the grain arrived at ports in what are now independent Baltic states. But the collapse of the communist state devastated Russia’s dairy and meat industries in the 1990s and freed up surplus grain that started to be exported after the turn of the century.

“In 2002, when we were only starting to export grain, the transhipment capacity in Russia was 5 million tonnes per year,” said Agriculture Minister Alexander Tkachev. “It is currently at 45 million tonnes, excluding the capacity which is currently being built or planned,” he said.

To boost its capacity to ship grain after losing access to Baltic ports, Russia embarked on projects to build new terminals in the Black, Caspian and Azov seas and modernise grain terminals such as the Novorossiysk Grain Plant. While more projects to boost Russia’s export capacity are being built or discussed none is set to be completed before 2020, meaning the country is more likely to add to its grain stocks than flood the global market.

Forecasts for Russia’s 2017-18 grain crop have been steadily upgraded in recent months but officials and analysts have left export estimates largely unchanged at about 45 million. Arkady Zlochevsky, head of Grain Union, a non-state farmers’ lobby group, said it would be good for Russia to export 55 million tonnes this season but it will only ship 45 million. “Our supplies are limited with infrastructure and other difficulties,” Zlochevsky told reporters last month.

Besides infrastructure constraints at home, Russia’s ability to export grain has also been hampered by the conflict in Ukraine. It was common practice before Moscow annexed the Crimean peninsula in 2014 for Russian traders to use Ukraine’s Black Sea ports, which can ship 52 million tonnes of grain.

But those ports are no longer available to Russian traders. Ports such at Sevastopol and Kerch in Crimea have some capacity to export Russian grain but shipments have also been complicated by legal issues following the annexation. Recognising its export limitations, Russia is upgrading some terminals and has plans to build one in the Black Sea port of Taman, as well as two more in the east near China.

Investors are also considering construction of a grain terminal in Russia’s Baltic Sea port of Ust-Luga. Agriculture Minister Tkachev has said the planned terminals near China will add a total of 11 million tonnes to Russia’s grain export capacity by about 2020, though some analysts say the infrastructure needed to feed these terminals means it could be longer before they are up and running. IKAR’s Rylko said it would be up to three years before all the projects improve the export situation significantly.