HARIPUR: The Rang De Haripur campaign has spread colours throughout the city.

Youth and students of the city put different strokes on the walls of the Higher Secondary School and Deputy Commissioner Office were painted on the first day of the just concluded Rang De Haripur or Colour the Haripur drive.

The enthusiastic people went on to show their artistic skills on more public offices during the competition promoted by the offices of DPO, Deputy Commissioner, EDO and Department of Education.

Creative Bachelors Society, a student organisation working under the administration of University of Haripur, has contributed towards organising the campaign and mobilising the youth.

Prizes were likely to be announced at a later date for the best graffiti.

Representative of Creative Bachelors Society, Subhan Mirza and Mahrukh Riyaaz, both students of Microbiology Department of the university said the artist who stands first will get cash prize of Rs100,000. 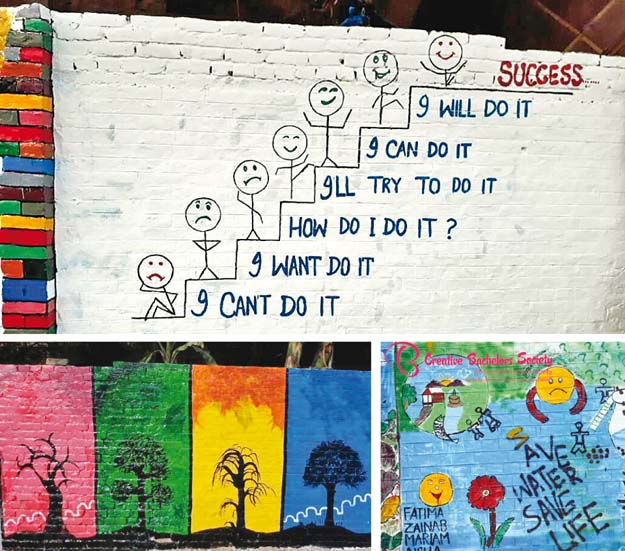 They said that purpose of this drive was to bring out the hidden talents to limelight. Large numbers of university students participated in the campaign.

Mirza said that over a 1,000 people had registered for the Rang De Haripur initiative.

He said that besides adding to the beauty of the city, the initiative gave people to exhibit artwork on walls.

Riyaaz said they got full support of the district administration. All public departments facilitated the youngsters to spread awareness regarding the campaign. Students from both private and public institutions have participated in the Rang De Haripur campaign, she said.

University of Haripur Vice Chancellor Dr Ubaid Fareed said that vast majority of schoolchildren also expressed great interest in the campaign and participated in it.

The citizens greatly contributed in funding the campaign which is running without government budget.

The youngsters cleaned the messy walls of the city and painted them with their artwork. They highlighted the importance of cleanliness with their artistic messages. The campaign was the first of its kind in the district.

People of the city said launching such a campaign is a good omen. This will raise the spirit of responsibility regarding cleanliness of the city. Participants were of the view that Hazara was full of natural beauty. Everyone should do a positive role in beautifying Haripur.