KARACHI: Power production in Pakistan touched an all-time high at 14,017 gigawatt-hours (GWh) in August 2018 on the back of increased generation by imported gas and coal-fired plants.

The production was 10% higher than the 12,754 GWh recorded in August 2017, according to data released by the National Electric Power Regulatory Authority (Nepra). The latest data showed that 14,017 GWh was the all-time high power generation level, Arif Habib Limited’s analyst Rao Aamir Ali said in a note to clients on Monday.

A gradual increase in production from two relatively new fuel sources – imported liquefied natural gas and coal – has continued to eat into the share of oil-based power generation in the total energy mix and has helped save billions of rupees every month in imports. 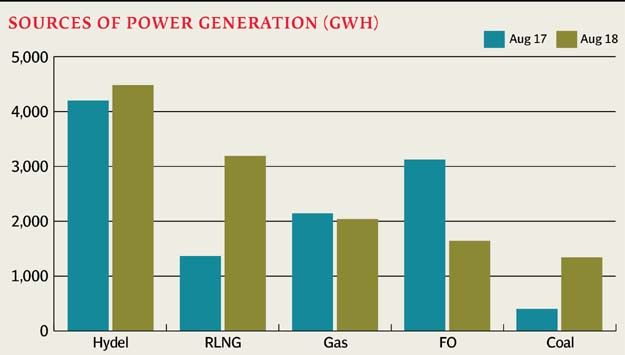 “We believe the replacement of furnace oil with coal has been lucrative for the economy,” the analyst said.

“Average cost of generation from coal in August 2018 came in at Rs6.4 per kilowatt-hour (kWh) compared to Rs14.5 per unit from furnace oil. Hence during the month, Pakistan saved Rs10.8 billion ($87 million) by replacing furnace oil with coal, assuming that the power generated from coal has reduced reliance on furnace oil.”

Moreover, the analyst said, if the savings of past eight months were added, they stood at Rs67.4 billion ($570 million). The drop in expensive furnace oil-based power generation was the outcome of previous Pakistan Muslim League-Nawaz (PML-N) government’s increased reliance on imported gas.

The PML-N government added over 5,000 megawatts of installed capacity to the system fuelled by re-gasified LNG and coal and pulled the plugs on around 4,000 megawatts of oil-based power generation, which continued to vary as per consumer needs in summer and winter seasons.

The cost of fuel in power generation increased 23.6% in August 2018 compared to the same month a year earlier.

The increase came in the wake of power generation by a relatively expensive source of energy (re-gasified LNG), but it is cheaper when compared with furnace oil.