Not a week goes by without an update regarding headway made by one automobile manufacturer or another testing out their self-driving prototypes. Some have even started testing the vehicles on site, exciting all who want to embrace a future where self driving vehicles are a common site.

That future is not too far off, but imagine a future where airplanes fly without pilots.

In October Geo.tv reported about ALIAS a project funded by Defense Advanced Research Projects Agency (commonly known as DARPA); the ALIAS project run by Aurora Flight Sciences tested pilotless flying using a Cessna Caravan in Manassas, VA where instead of a pilot ALIAS a robot with tubes and pipes and claws flew the plane, with instructions being fed to it by a human pilot using a tablet PC.

If ALIAS caught you by surprise, the robotic planes currently being tested by BAE Sytstems a British defence, security and aerospace company will surely blow you away.

As with the DARPA funded project, BAE Systems is also testing with a human pilot on board where the machine is assisted during take-off and landing but with the flick of a switch the cockpit-mounted infrared camera dubbed the “electronic eye” along with a network of seven cameras located on the underside of the plane as well as a collision avoidance system take over and fly the plane without any human-pilot interference.

BAE Systems conducted a 90-minute flight from Lancashire, UK to Inverness, Scotland. During the 300-mile journey a team of engineers observed and communicated with the plane using satellite and radio controls to assist when needed, but it is said that this is only being done during the early testing phase.

The Lancashire-Inverness route was selected due to little air traffic, as the project takes baby steps allowing BAE Systems to tweak the technology as needed and to test out how the on-board system operate without human intervention.

BAE Systems aims to introduce the pilotless aircraft into controlled airspace by 2020 after which it aims to deploy the same technology on unmanned fighter jets for combat missions.

If the targets are met, it could mean your first driverless car and first pilotless flight could become a reality in as little as four years. 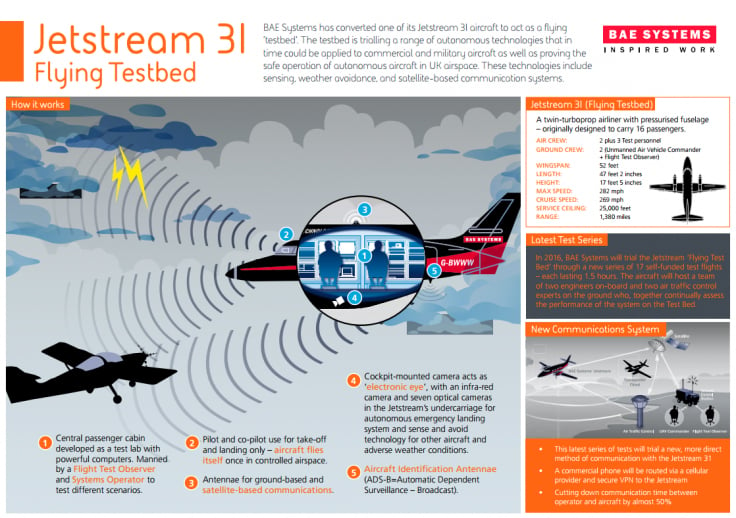