As it makes the practice more attractive, the slaughtering of the Camels on this auspices occasion is rising with passage of time in culturally rich South Punjab. The Camel herders, who, mostly, live out in scorching desert heat, pay immense focus on nurture of the animal. Camel is an important multi-purpose animal that caters the socio-economic needs of the inhabitants of the deserts and other remote areas of South Punjab. It is sole bread winner for the poor farmers. There are about 0.328 million households linked one way or other with camels’ production in Pakistan.

Camel meat is largely consumed by the people of rural and remote areas of the country, as most of the citizens not develop the taste for its meat. However, the trend is now changing gradually due to awareness among people about the medicinal importance of Camel milk.

According to Punjab Livestock Department, over 798000 tonnes of milk is being annually produced in Pakistan. The trend of slaughtering Camels on Eidul Azha is increasing steadily.

Mirza Asghar, a resident of Dera Ghazi Khan city, told APP he was slaughtering Camels on Eid ul Azha for last six years. However, the camel slaughter is still new for most of the citizens and attracts crowds, mostly kids and women, to watch an out-of- routine activity.

Slaughtering Camel is difficult as compared to other big animals.

Similarly, a good number of relatives and friends also used to approach him for seeking the camel meat. Like any other child, my kids also enjoy camel ride.

Camels carry a higher price tag. One can buy a camel at a price ranging from Rs 150,000 to Rs 500,000. According to Pakistan Tanneries Association, nearly 30,000 camels were usually slaughtered on Eid days. However, the trend of camel sacrifice was on the rise, it added.

Muhammad Qasim, a camel herder from Layyah, informed that he had sold five camels this year and waiting for the buyers for the remaining two. Last year, he had sold three camels only. He hoped he would sell remaining two Camels in next two days. He informed that he had strived hard to nurture these animals. Qasim hoped that he would earn handsome amount this year as the tendency of Camel sacrifice is increasing among people of Urban areas also.

Another citizen Rana Shafay, resident of district Lodharan said he bought Cholistani camel on this Eid for the first time in his life.

“Other big animals carried a higher price tag, so I made up my mind to sacrifice Camel this year Eid.” 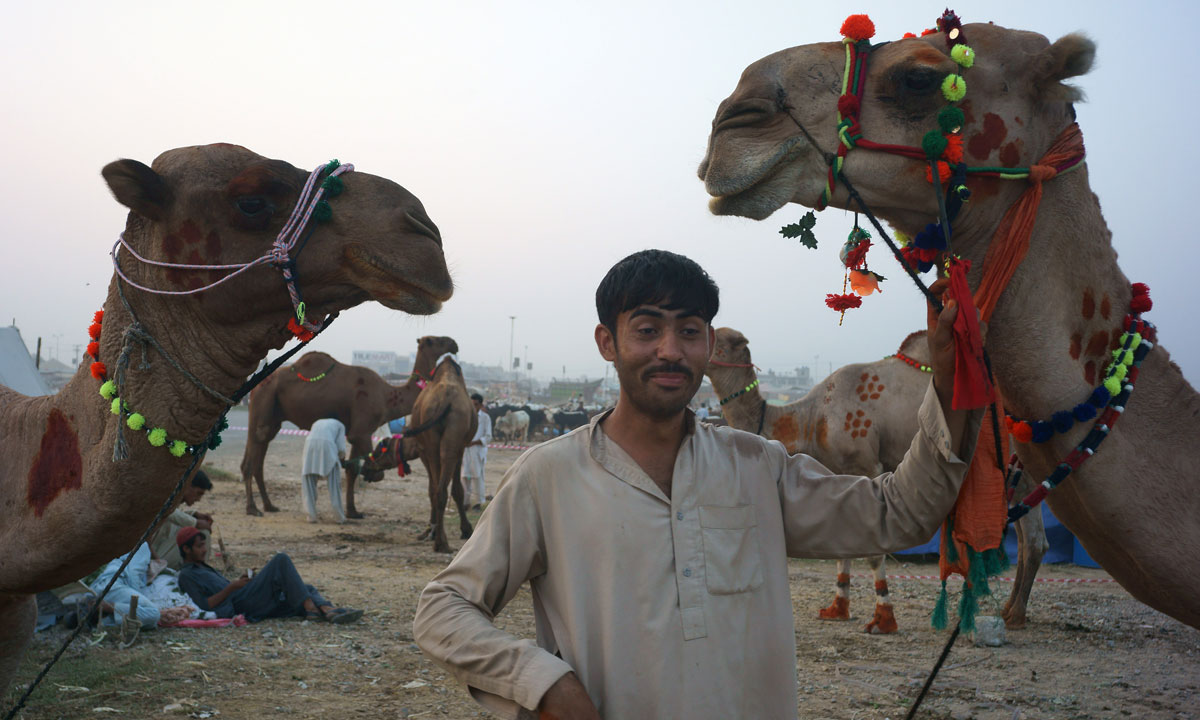 A camel vendor waits for customers at a market set up for selling animals. Photo: AP

District administration Multan has set up a separate market for sale and purchase of Camels. Nearly 1000 Camels are present at the sale point near Kidney institute, says a Camel herder Muhammad Akram. He said, citizens were found more interested in buying camels this year compared to previous year.

For a long time, the Camel has been the most ignored among the domestic ruminant in Pakistan, focal person livestock department Multan Dr Majid told APP. However, during past few years, resurgence of interest in this specie has been witnessed in the developed countries of the world due to its milk and meat.

Secretary Livestock and Dairy Development realized this emerging global demand/trend for Camels and the products and envisioned a project titled “Prophylactic Measures, zero- surveillance of Camel and its milk processing in Punjab”.

Dr Majid further informed that the government formulated special mixture for she- camels in order to compensate deficiency of mineral. Similarly, another deworming campaign was also launched to improve health of the animals and 47139 camels were given doses.

He added that Camel sacrifice on occasion of Eid ul Azha was a common practice in Arab countries.