Dr Mahmood was born in a small village in Pakistan and came to the US 26-years-ago to study medicine in Kentucky, moving to California in 2000. The 56-year-old is a pulmonologist in Pasadena and if elected will be the first Muslim to hold a statewide office in the state of California.

On his campaign website, Dr Mahmood describes himself as a “triple threat” being a Democrat, Muslim and immigrant. 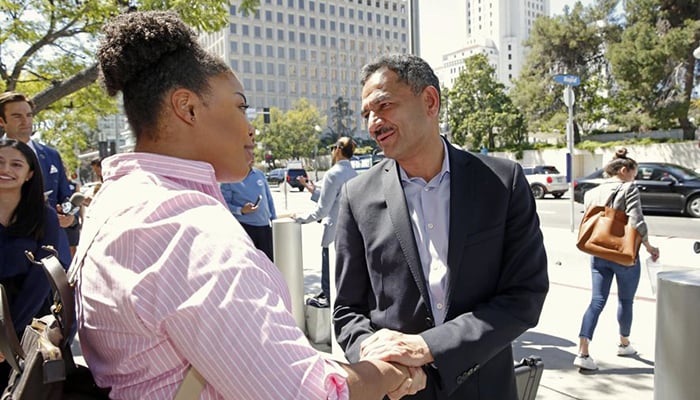 Dr Asif Mahmood, right, a physician who came to the US from Pakistan, greets supporters as he announces he is joining the 2018 race for California’s lieutenant governor – AP

In an interview with The New York Times, Dr Mahmood said he did not think to be a Muslim would be an obstacle in getting elected in California. “But I am a proud Muslim and a proud immigrant and I love America. I deal with Americans every day. And when you help them they are totally appreciative of that,” he told NYT.

In an interview with Associated Press, Dr Mahmood spoke of President Trump continuing to attack people like himself (immigrants, people of colour and Muslims). “I say President Trump has it all wrong. It’s time to get tough on hate. California must be the leader of the Trump resistance, and I will fight him every step of the way.”

Web Desk
Previous ArticleWhy an excessive intake of vitamins is bad for you
Next Article Trade activities poised to increase manifold: Naval Chief