Approximately 2.6 million Afghan refugees are living worldwide, with a majority of them being accommodated by Pakistan.

The UN refugee agency reported today that the number of refugees, asylum-seekers and internally displaced people worldwide has, for the first time since World War II, exceeded 50 million people. The number, as of now stands at 51.2 million refugees around the globe.

Astonishingly, at the end of 2013, 50% of the total number of refugees were children below the age of 18. This is the highest number recorded in the past 10 years.

The massive increase in the number of refugees around the globe is a result of the ongoing crisis in Syria, as well as Central African Republic and South Sudan.

The major source countries of refugees are Afghanistan, Syria and Somalia, where as Pakistan, Iran and Lebanon host more refugees than any other country. 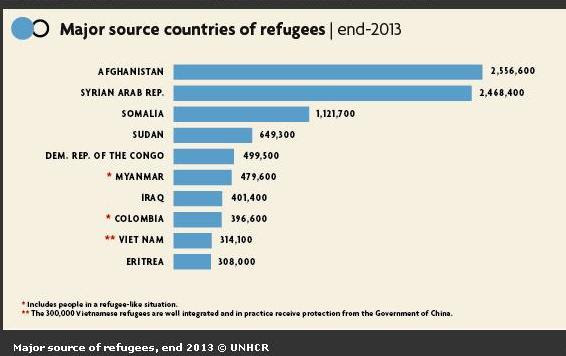 UN High Commissioner for Refugees, António Guterres said, “we are seeing here the immense costs of not ending wars, of failing to resolve or prevent conflict.”

A review of the past year by UNHCR indicates that if the 51.2 million refugees around the globe were a nation, it would be the 26 largest in the world.

Web Desk
Previous ArticleIndia’s covert nuke plant to ‘assert regional leadership’
Next Article Every Bomb Matters, So Does Every Life!