MELBOURNE: Pakistan beat Australia by six wickets in the second one-day international at the Melbourne Cricket Ground on Sunday, their first ODI win on Australian soil for 12 years.

The win was also Pakistan’s first ODI victory at the MCG since 1985 and levels the five-match series at 1-1.

Powered by a solid start from Mohammad Hafeez and Sharjeel Khan and helped along by the middle-order, the Green Shirts sailed to a comfortable win over the hosts chasing the target of 221.

Hafeez’s aggressive knock of 72 ended but not before Pakistan looked well on track to achieve the target. Sharjeel Khan, after guiding Pakistan to a smooth start, fell for 29, with Pakistan at 68-1. Mohammad Hafeez, captaining the side in absence of injured Azhar Ali, fell to a Faulkner delivery by giving a catch at boundary.

Amir had Mitchell Marsh out for a golden duck, as Pakistan put the hosts on the defensive early into the game. Hasan Ali had Travis Head caught behind for 29, while Imad Wasim bowled out Glenn Maxwell for 23. Shoaib Malik bowled out Matthew Wade.

Australia won the toss and decided to bat first. Injuries forced Australia for a double change in their squad while Pakistan opted for three changes of their own.

“Chris Lynn has aggravated his neck again so he’s out,” Australia skipper Steve Smith said at the toss. “(Stanlake) is a little bit crook. I think he’s got a virus so he was struggling a bit the other night.

“Give him a couple of days rest and we’ve got big Hazlewood back which is a plus.”

Pakistan made three changes from the side that lost by 92 runs at the Gabba.

Mohammad Hafeez is captaining the tourists after regular skipper Azhar Ali was ruled out with a hamstring injury he suffered in the opening loss in Brisbane.

Wahab Riaz and Mohammad Nawaz were omitted with Junaid Khan, Asad Shafiq and Shoaib Malik coming into the starting XI. 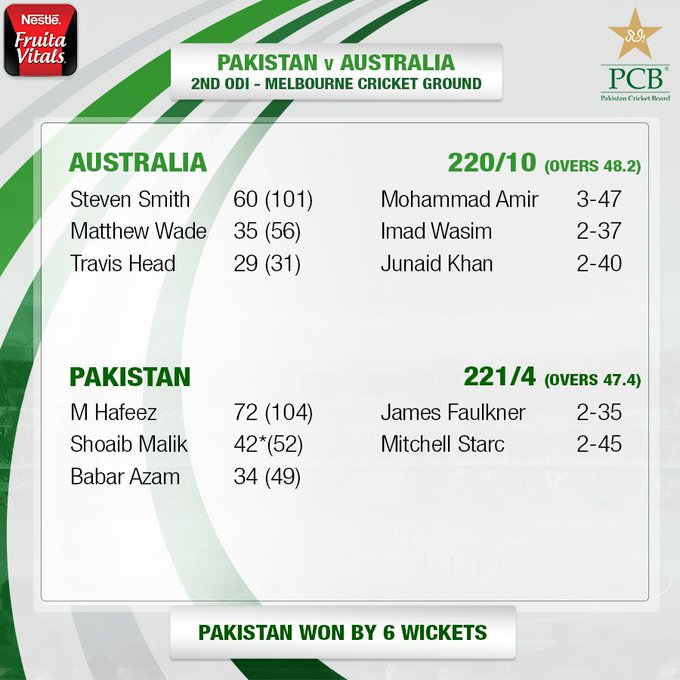 Mohammad Hafeez —who captained the side in the absence of Azhar Ali — said that the response from the players was outstanding after the defeat in the first ODI.

Talking to the media after the match Hafeez said that every player took responsibility and performed up to his potential.

“It was my first ODI as captain. Happy for the win. Every player raised his hand and took responsibility. Credit [for the win]goes to them”, Hafeez added.

He said that before the match they had discussed with Head Coach Mickey Arthur to play attacking cricket throughout the match and that’s what they did.

Hafeez —who contributed 72 runs with the bat — said that chasing a 250+ target would have been difficult as the wicket was on the slower side.