Army chief General Qamar Bajwa has conveyed to the Australian leadership that while Pakistan will continue to support peace efforts, it expects its “security concerns are also addressed”, the Inter-Services Public Relations (ISPR) has said.

The COAS expressed the remarks during his meetings with Australia’s civil and military leaders on Monday. He is in Canberra, Australia on a two-day official tour.

“Upon arrival at the Defence Forces Headquarters in Canberra, COAS was given a tri-service Guard of Honour,” the military’s media wing said in a statement. 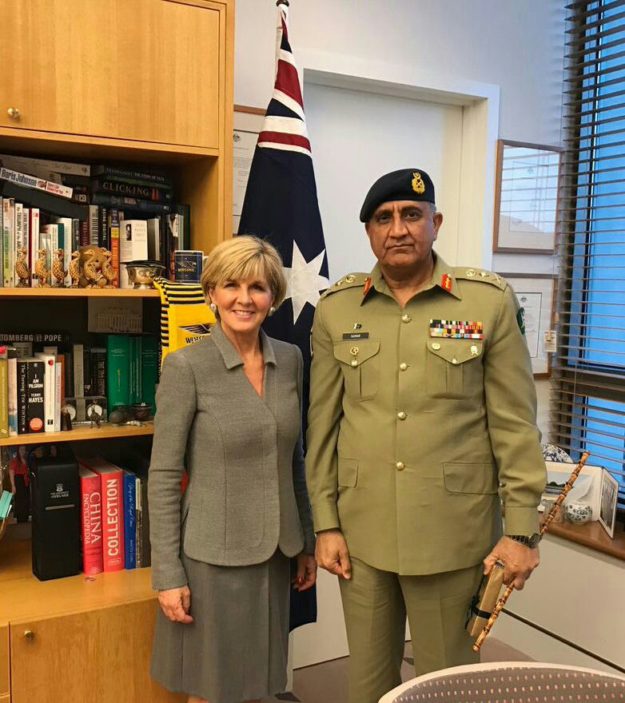 “During these meetings with Australian military and civilian leadership, [the]COAS highlighted regional security situation and Pakistan Army’s contributions towards peace and stability,” the ISPR added.

Pakistan, Gen Qamar added, has improved security situation and has a key role in regional economy.

“The Australian leadership appreciated Pakistan’s efforts against terrorism and expressed commitment to further improve the bilateral collaboration in defence and security,” the statement said.

Pakistan, as part of the war on terror, has been battling militancy since years, with hundreds of soldiers and militants killed in the fighting. However, US President Donald Trump has targeted Pakistan for ‘not doing enough’ to deal with certain militant outfits including the Afghan Taliban. The assertion was rejected by Islamabad.

Web Desk
Previous ArticleAxact’s Assistant Vice President gets $5.3 million fine, 21 months in jail
Next Article ‘Terrorists cannot win and cricket must not give up on Pakistan’