Pakistan dominated in the field after an attacking display of batting saw the Green Shirts post a mammoth total of 201-4 in the second T20 international against New Zealand at Eden Park, Auckland on Thursday.

New Zealand were left staggering at 64-6 after a combination of pace attack and spin took Pakistan closer to levelling the T20 series.

Haris ran out Tom Bruce soon after with an incredible direct hit that reduced the Kiwis to 47-3.

Faheem Ashraf got Glenn Phillips while Shadab had Grandhomme stumped.

Earlier, Ahmed Shehzad, who returned to the playing XI in place of Mohammad Nawaz, along with Fakhar Zaman made a flying start, smashing boundaries all over the park to put the Kiwis on the back foot.

Fakhar hit 50 off 28 balls and Shehzad scored 44 off 34 balls, but Pakistan lost no momentum after their dismissal.

Skipper Sarfraz, who promoted himself up the order, and back-in-form Babar Azam kept the tempo. Sarfraz contributed a fiery 41 off 24 before getting caught.

Faheem Ashraf couldn’t fire and was dismissed for duck. Babar stayed not out at 50 off 29 deliveries.

The Kiwis beat Pakistan by seven wickets in the first T20 in Wellington, as the tourists’ batting woes persisted. The Green Shirts could only manage a total of 105, with only Babar Azam and Hasan Ali reaching double figures. New Zealand chased down the target with seven wickets in hand and 25 balls remaining, driven by a power batting show by Colin Munro (49*).

The Green Shirts did a warm-up session ahead of the match today. 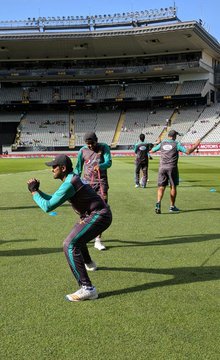 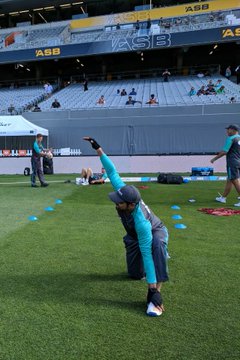 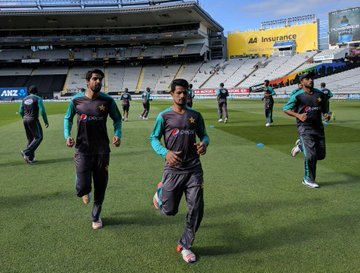 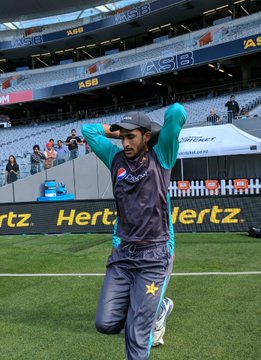