Search
HomeNewsNational
By Web Desk on May 13, 2015 National

The exercise marked the culmination of the induction training of the new system, said a press release issued by the Inter-Services Public Relations (ISPR).

“All weather, surface to air missile FM-90, with a capability to engage aerial target including cruise missiles, drones and air to surface guided missiles can operate under adverse electronic counter measures (ECM)environments,” it said.

FM- 90 missile system has the ability to engage multiple types of target at one time. The system enhances Pakistan’s air defence capability both in range and accuracy, said the Pakistan Army’s media wing. 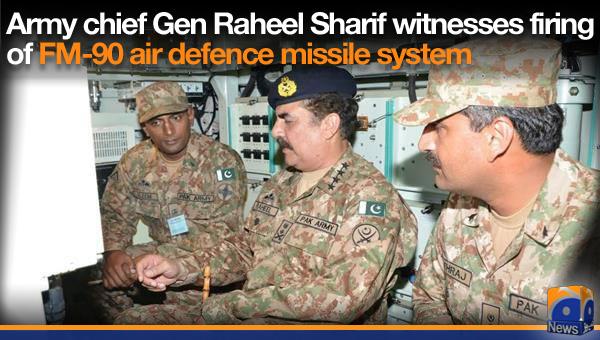 Addressing the officers and troops of Army Air Defence, the army chief appreciated the training standards achieved. He also emphasised the importance of air defence in today’s warfare and the need for continuous up-gradation of equipment, as well as training to defeat a wide threat spectrum.