Around 16 million Pakistani citizens, who didn’t use the internet before, went online for the first time between 2012-2015. This is huge because this its almost half (47%) of the overall internet users in Pakistan. This was revealed in a report published by the UN on Tuesday.

In terms of people using the internet, Pakistan became one of the top 10 economies using the Internet. India remains the 1st, Iran 7th, Bangladesh 10th while Pakistan comes at 9th position.

Internet is Used More than Ever

This wasn’t unexpected as Pakistan has been utilizing the internet a lot more than before. Introduction of 3G/4G and more people using smartphones is one of the main factors which led to this outcome.

E-commerce and other digital applications are being accepted and incorporated into businesses and homes alike. Websites such as Daraz, Aliexpress, and Kaymu have contributed a lot to the internet usage of Pakistani people and are being used widely.

Almost every Pakistani knows about these websites. Ride-hailing companies such as Careem and Uber have encouraged Pakistanis to go online and utilize the internet. According to statistics, almost 73% of smartphones users in Pakistan have some sort of ride-hailing app installed.

United Nations Conference on Trade and Development (UNCTAD) produces an annual report titled “The Information Economy Report” which highlights the internet economy of the world.

The report revealed that more than half of the world’s population is still offline but in some countries, the number of people going online is increasing. 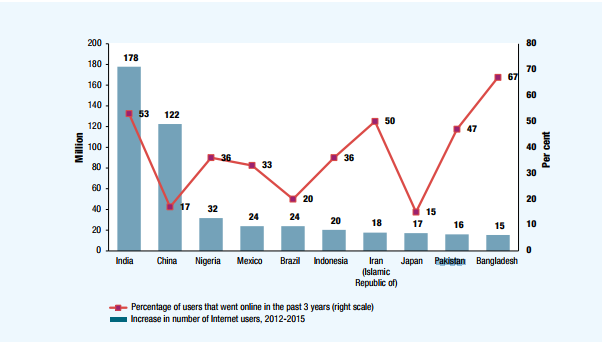 The report suggests that efforts should be made by respective governments to encourage internet usage so that “no-one is left behind as a result of digitalization”.