“You don’t have to be a husband or a father to hear what we heard just a few days ago and say that’s not right,” the president said in Greensboro, North Carolina, in his first public remarks since the release of a 2005 tape showing Trump bragging about groping and kissing women without their consent.

“You just have to be a decent human being to say that’s not right.”

Campaigning on behalf of Hillary Clinton in North Carolina, Obama said the Republican presidential nominee is unfit “for a job at 7-Eleven”, let alone the presidency.

He encouraged the crowd of nearly 8,000 to respond at the ballot box in November.

“If it makes you mad”, the president said, “then you say ‘That’s not somebody I want representing the United States of America.’ You can do something about it, North Carolina.”

“The guy says stuff nobody would find tolerable if they were applying for a job at 7-Eleven,” he added.

The president, among Clinton’s most powerful surrogates, did not reserve his criticism solely for Trump. He also mocked Republicans who rebuked Trump’s comments but continued to endorse his candidacy.

“That doesn’t make sense to me,” Obama said. “You can’t have it both ways here. You can’t repeatedly denounce what is said by someone and then say but I’m still going to endorse him to be the most powerful person on the planet and to put them in charge.”

He also expressed his disbelief at the Republicans who have expressed hope that Trump might change his ways. 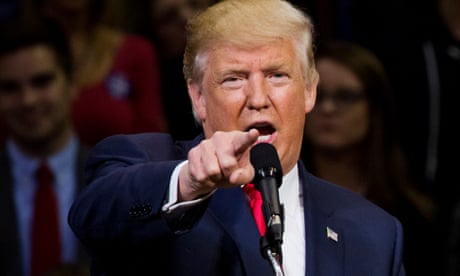 Earlier in the day, White House press secretary Josh Earnest told reporters the president had found Trump’s boasting about his behavior toward women to be “repugnant”.

There had been a wide consensus across the political spectrum, Earnest added, that Trump’s remarks “constituted sexual assault”.

At an evening rally in Florida, Trump managed to train his fire on Clinton rather than members of his own party, whom he had spent the afternoon denouncing on Twitter.

Trump seized on the hacked emails of Clinton campaign chairman, John Podesta, that were made public by Wikileaks this week, accusing the Obama administration of colluding with the democratic nominee over its investigation into her use of a private email server.

“The DOJ fed information to the Clinton campaign about the email investigation so that the campaign could be prepared to cover up for her crimes,” Trump said at a rally in Panama City, Florida on Tuesday night. “This is collusion and corruption of the highest order and is one more reason I will ask my attorney general … to appoint a special prosecutor. We have to investigate Hillary Clinton and we have to investigate the investigation.”

He called the FBI probe into her emails – in which the agency director James Comey reprimanded Clinton for being “extremely careless” but ultimately recommended no charges – a “disgrace”.

The email Trump singled out involves an exchange between Clinton spokesman Brian Fallon and the DOJ concerning a lawsuit pertaining to a freedom of information request about her emails, not the investigation. There is no evidence that the DOJ communicated with Fallon on the email investigation.

“I’ve been involved in politics for nearly five decades,” Podesta told reporters. “This definitely is the first campaign that I’ve been involved with in which I’ve had to tangle with Russian intelligence agencies … who seem to be doing everything that they can on behalf of our opponent.” Podesta did not confirm the veracity of the leaks.

Ahead of the Florida rally, Trump lashed out at Speaker of the House Paul Ryan, who this week announced he would no longer defend Trump or campaign with him although he stopped short of formally withdrawing his support of the nominee.

“They’re not giving support – they don’t give the support that we really need – but the fact is that I think we should get support and we don’t get the support from guys like Paul Ryan,” Trump told Fox News host Bill O’Reilly on Tuesday. “[Ryan] had a conference call with congressmen, with hundreds of them, and they practically rioted against him on the phone. One person stuck up for him.”

“And I don’t really want his support,” Trump added of Ryan.

O’Reilly asked Trump to elaborate on his earlier tweet in which he wrote that it was “so nice that the shackles have been taken off me”.

Trump said the shackles represented some of “establishment people, the weak and ineffective people within the party”. When O’Reilly asked if “throwing off of the shackles” meant that he would become more outspoken, Trump forcefully denied that he was outspoken.

He also denied polling that shows him losing support among women, a group he had trouble appealing to even before the release of video in which he boasted about touching women without consequence because of his fame, speech he subsequently dismissed the remarks as “locker room talk.”

With less than one month left until election day, Trump is under pressure by party leadership and his own supporters to hone his attack strategy and stick to it. His campaign has so far proved resilient despite not having a conventional fundraising structure or voter outreach plan.

During the speech in Florida’s conservative panhandle, Trump encouraged the crowd to register to vote. He noted that the voter registration deadline in Florida had been extended because of the hurricane, which interrupted the state’s final registration days.

“It’s a movement. But if we don’t win, all it is a little asterisk in history,” Trump said. “There’s never been anything like this. So go and register. Make sure you get out and vote. November 28th.” The US election is on 8 November.