KARACHI: Pakistan Navy detected an Indian submarine and prevented it from entering territorial waters, a press release from the Pakistan Navy revealed on Friday.

According to the press release, Pakistan Navy once again proved its vigilance and operational competence by detecting and blocking an Indian submarine from entering Pakistani waters.  The unsuspecting submarine was detected and localised south of Pakistani coast on 14 November. Thereafter, despite the submarine’s desperate efforts to escape detention, it was continuously tracked by Pakistan Navy Fleet units and pushed well away clear of Pakistani waters.

The press release further said, that the thriving encounter of detecting the Indian Navy submarine at high seas and its continued surveillance not only speaks very high of Pakistan Navy’s anti-submarine warfare capability but also reflects the commitment and resolve to defend sea frontiers of Pakistan.

“In order to divert attention from the indigenous freedom movement in Indian Occupied Kashmir, India has persistently embarked upon a series of provocative actions against Pakistan. While Indian Army continues to undertake serious ceasefire violations along the LOC and the Working Boundary, Indian Navy has also deceitfully deployed its submarines against Pakistan with ulterior motives,” the press release added.

According to Commodore (Retd) Syed M Obaidullah, the diesel-electric attack submarine Type 209 is one of the most lethal submarines in the world. He added that the submarine was headed towards the coast of Balochistan.

Speaking to Geo News, Admiral (retired) Tasneem Ahmed said there can be 2-3 reasons for the presence of the Indian submarine. He added that the submarine was detected through aerial surveillance. 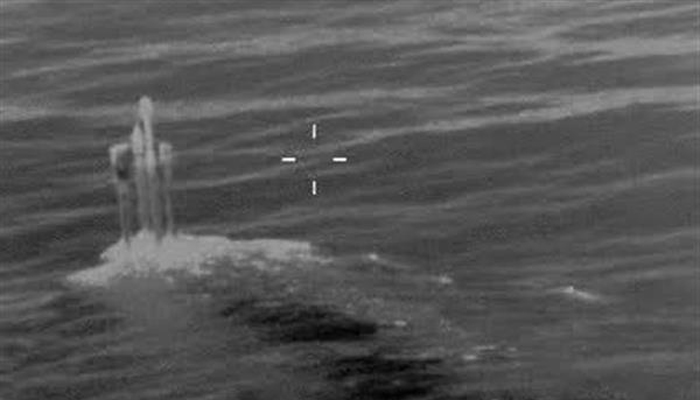 On Tuesday, cargo shipment set off from Gwadar port under the protection of Pakistan Navy ships.

The cargo containers were subsequently exported to Middle East and African countries through MV COSCO WILLINGTON and MV AL HUSSEIN.

Pakistan Navy, being cognizant of its responsibility to make the maritime component of CPEC and Gwadar Port safe, deployed its ships and aircraft to provide security cover so as to ensure safe and secure transit of MV COSCO WILLINGTON and MV AL HUSSEIN in international waters.

The China Pakistan Economic Corridor is a collection of project worth $46billion; the major portion will be spent for enhancing energy capacity of the country and almost $12billion on infrastructure related projects.