The AirAsia plane which went missing with 162 people on board en route for Singapore is likely at the bottom of the sea, Indonesia’s National Search and Rescue Agency chief said Monday.

“Based on the coordinates given to us and evaluation that the estimated crash position is in the sea, the hypothesis is the plane is at the bottom of the sea,” Bambang Soelistyo told a press conference.

“That’s the preliminary suspicion and it can develop based on the evaluation of the result of our search.” 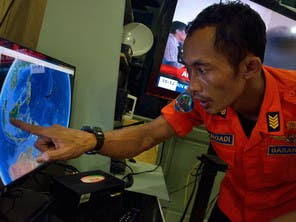 An official from Indonesia’s national search and rescue agency in Medan, North Sumatra points at his computer screen to the position where AirAsia flight QZ8501 went missing. (AFP)

Following the remarks, Indonesia’s transport minister announced that the government would review AirAsia’s operations in the Southeast Asian country following the disappearance of a plane carrying 162 people.

“We will do a ground check as well as a review of AirAsia’s operations in Indonesia to ensure that all of its activities are better in the future,” Ignasius Jonan told reporters. 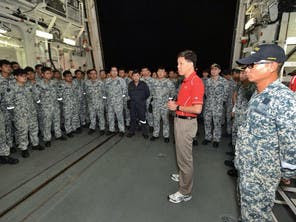 Second Minister for Defence Chan Chun Sing speaking with Republic of Singapore Navy (RSN) servicemen on board RSS Supreme before departing for the search. (AFP)

The carrier said the missing jet, an Airbus A320-200, last underwent maintenance on November 16. It disappeared Sunday en route from Surabaya in Indonesia’s east Java to Singapore, after the crew requested a change of flight plan due to stormy weather.

It vanished in airspace thick with storm clouds.

In such cases, pilots have plenty of time to find a way around the storm cluster or look for gaps to fly through, he said.

“It’s not like you have to make an instantaneous decision,” Cox said. Storms can be hundreds of miles long, but “because a jet moves at 8 miles a minute, if you to go 100 miles out of your way, it’s not a problem.” 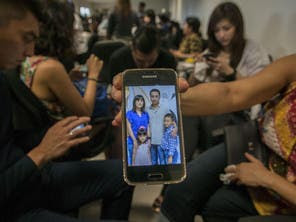 A relative shows a picture of alleged passengers who were travelling on missing Malaysian air carrier AirAsia flight QZ8501. (AFP)

First Admiral Sigit Setiayana, the Naval Aviation Center commander at the Surabaya air force base, said that 12 navy ships, five planes, three helicopters and a number of warships were taking part, along with ships and planes from Singapore and Malaysia. The Australian Air Force also sent a search plane.

Setiayana said visibility was good. “God willing, we can find it soon,” he told The Associated Press.

AirAsia is a regional low-cost carrier with a presence in several Southeast Asian countries.

The company was formed in 2001 in Kuala Lumpur, Malaysia and has had an impeccable safety record, with no incidents since 2001.

The disappearance is the third major aviation incident involving Malaysia this year: in March, Malaysia Airlines Flight 370 disappeared with 239 people, and in July, a jet from the same airline was shot down over Ukraine, killing all 298 people aboard.

At the Surabaya airport, passengers’ relatives pored over the plane’s manifest, crying and embracing. Nias Adityas, a housewife from Surabaya, was overcome with grief when she found the name of her husband, Nanang Priowidodo, on the list.

The 43-year-old tour agent had been taking a family of four on a trip to Singapore, Malaysia and Indonesia’s Lombok island.

“He just told me, ‘Praise God, this new year brings a lot of good fortune,’“ Adityas recalled, while weeping.

Nearly all the passengers and crew are Indonesians, who are frequent visitors to Singapore, particularly on holidays. 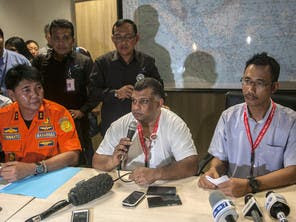 The Airbus A320 took off Sunday morning from Indonesia’s second-largest city and was about halfway to Singapore when it vanished from radar. The jet had been airborne for about 42 minutes.

There was no distress signal from the twin-engine, single-aisle plane, said Djoko Murjatmodjo, Indonesia’s acting director general of transportation. 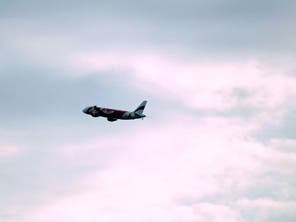 An AirAsia plane takes off from terminal 1 at Changi international airport in Singapore on December 29, 2014. (AFP)

It disappeared while at its cruising altitude, which is usually the safest part of a trip. Just 10 percent of fatal crashes from 2004 to 2013 occurred while a plane was in that stage of flight, the safety report said.

Indonesia, Singapore and Malaysia launched a search operation near Belitung island in the Java Sea, the area where the airliner lost contact with the ground. Early on Monday, the Chinese foreign ministry announced that its government offered to help in the search.

Focus on the families

AirAsia group CEO Tony Fernandes flew to Surabaya and told a news conference that the focus for now should be on the search and the families rather than the cause of the incident.

“We have no idea at the moment what went wrong,” said Fernandes, a Malaysian businessman who founded the low-cost carrier in 2001. “Let’s not speculate at the moment.” 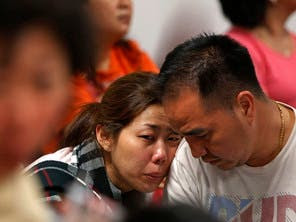 The plane had an Indonesian captain, Iryanto, who uses one name, and a French co-pilot, five cabin crew members and 155 passengers, including 16 children and one infant, the airline said in a statement. Among the passengers were three South Koreans, a Malaysian, a British national and his 2-year-old Singaporean daughter. The rest were Indonesians.