LAHORE: Pakistan’s Test skipper Misbah-ul-Haq has announced his retirement from international cricket, telling reporters on Thursday that the series against West Indies would be his last.

Speaking to the media at the Gaddafi Stadium, Misbah said he would try his best to end his career on a high note.

The 42-year-old skipper said the decision to quit was his own and was not brought about by any external pressure.

“I had decided to retire some time ago,” he said, adding that he would continue to play domestic cricket in the near future.

“But I have not decided yet what I will do after retirement,” he remarked.

Reminiscing on his cricket career, he said he was proud and content with whatever he had achieved during his cricketing journey.

Misbah said receiving the Test mace when Pakistan became the number one Test team in the world last year remains among the best memories of his career.

“It was the highlight of my career,” he said.

But the journey was not without regrets and challenges. According to Misbah, winning the 2015 World Cup remained an unfulfilled dream.

“It was my dream to bring Pakistan the World Cup 2015 [glory], but it could not come true,” he said.

Misbah holds the record of captaining Pakistan in the most test matches as skipper. From 2010-2017 he led Pakistan in 53 matches winning 24, losing 18 and 11 draws. 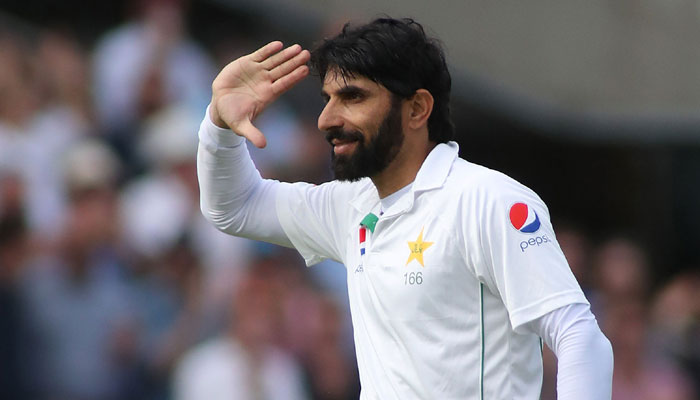 Misbah urges nation to back Sarfraz

Speaking to reporters today, Misbah urged the nation to throw their support behind Sarfraz Ahmed, the current ODI and T20I captain and a likely successor to Misbah in the Test format.

“Sarfraz is leading Pakistan in limited-over formats, it would be good if everyone supports him,” Misbah said.

Expressing his concern over recent Test defeats faced by Pakistan, Misbah said the slump does not accurately represent the true potential of the team.

“The last six Tests do not show our capabilities, Pakistan have a good opportunity to come back on the winning track in the series against West Indies,” the skipper stressed.

Reiterating the importance of the West Indies tour, Misbah said the team strives to win every match it plays and praised his side’s Test batting line-up.

On Wednesday, Pakistan Cricket Board (PCB) chairman Shahryar Khan said that the Test series against West Indies would be the last for Misbah-ul-Haq.

Former Pakistan skipper Wasim Akram speaking to Geo News said Misbah should be given a deserving farewell. “We need to change the trend and give our heroes a proper farewell,” Akram added.

“Misbah was a match winning captain and guided Pakistan through troubled times which showed his character,” Akram told Geo News.

Wasim stressed that filling Misbah’s shoes would be a difficult task but whoever is appointed skipper should be supported by the PCB.