Pakistan is observing the first death anniversary of its top philanthropist and son of the soil who made the country proud in a way probably no other did. Edhi was a beacon of light, a saviour who till his last breathe served humanity.

Here is the story of the man, the super hero that Edhi was and some facts you probably didn’t know about the great philanthropist. ARY Digital Network is also running a campaign ‘Main Edhi Hoon’ to observe Edhi’s death anniversary as National Charity Day.

Abdul Sattar Edhi was born in 1928 in a small village of Bantva near Joona Garh, Gujrat (India). The seeds of compassion for the suffering humanity were sown in his soul by his mother’s infirmity.

At a tender age of eleven, his mother became paralysed and later got mentally ill. Young Abdul Sattar devoted himself for looking after all her needs; cleaning, bathing, changing clothes and feeding. This proved to be a losing battle against the disease, and her helplessness increased over the years. Her persistent woeful condition left a lasting impression on young Edhi. The course of his life took a different turn from other persons of his age. His studies were also seriously affected and he could not complete his high school level. For him the world of suffering became his tutor and source of wisdom.

Edhi’s mother died when he was 19. His personal experience made him think of thousands and millions, suffering like his mother, around with nobody to look after them. He thought that he had a call to help these people. He had a vision of chains of welfare centres and hospitals that could be opened to alleviate the pain of those suffering from illness and neglect. He also thought of the inhuman treatment meted out to the mentally ill, the insane and the disabled persons.

Even at this early age, he felt personally responsible for taking on the challenge of developing a system of services to reduce human miseries. The task was huge he had no resources. But it was something that he had to do even if he had to walk to the streets if he had to beg for this purpose.

Edhi and his family migrated to Pakistan in 1947. In order to earn his living, Abdul Sattar Edhi initially started as a peddler, later became a commission agent selling cloth in the wholesale market in Karachi.

After a couple of years, he left this occupation and with the support of some members of his community decided to establish a free dispensary. He became involved in this charity work. However, soon his personal vision of a growing and developing system of multifarious services made him decide to establish a welfare trust of his own and named it as “Edhi Trust”.

An appeal was made to the public for funds. The response was good, and Rs.200,000/- were raised. The range and scope of work of Edhi Trust expanded with remarkable speed under the driving spirit of the man behind it. A maternity home was established and emergency ambulance service was started in the sprawling metropolis of Karachi with a population of over 10 million.

More donations were received as people’s confidence in the activities of the Trust grew. With the passage of time, masses gave him the title of the” Angel of Mercy.”

Abdul Sattar Edhi was married in 1965 to Bilquis, a nurse who worked at the Edhi dispensary. The couple has four children, two daughters and two sons. Bilquis runs the free maternity home at the headquarter in Karachi and organises the adoption of illegitimate and abandoned babies. The husband-wife team came to share the common vision of single-minded devotion to the cause of alleviation of human sufferings and a sense of personal responsibility to respond to each call for help, regardless of race, creed or status.

Edhi involved himself in every activity at Edhi Foundation from raising funds to bathing corpses. Round the clock he kept with him an ambulance which he drove himself and made rounds of the city regularly.

On finding a destitute or an injured person any where on the way, he escortd him to the Relief Centre where immediate attention is given to the needy person. In spite of his busy work schedule with the Foundation, Edhi found enough time to spare with the residents of the orphanages called “Edhi Homes”. He was very found of playing and laughing with the children. A short strongly built man in his early seventies with a flowing beard and a ready smile, Edhi was popularly called “Nana” (Grandfather) by the residents of “Edhi Homes”.

Despite his enormous fame and the vast sums of money that passes through his hands, Edhi adhered to a very simple and modest life style. He and his family lived in a two room apartment adjacent to the premises of Foundation’s headquarter. Neither Edhi nor Bilquis received any salary. They lived on the income from government securities that Edhi bought many years ago to take care of their personal needs for the rest of their lives, thereby freeing them to devote single-mindedly to their missionary work. 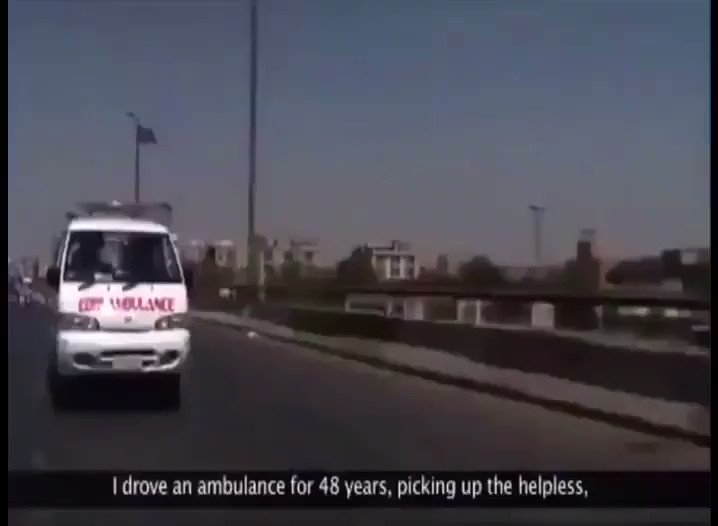 He shunned publicity for the fear of becoming haughty. As the credibility and fame grew and the name of Edhi became a household word, people started approaching him for becoming a chief guest on special occasions.

In an interview given to a journalist in Lahore in 1991, Edhi said,”I want to request the people not to invite me to social gatherings and inaugural ceremonies. This only wastes my time which is wholly devoted to the well being of our people.”

He passed away at the age of 88 on July 8, 2016. He had been suffering from kidney failure since 2013 and was on dialysis. Funeral prayers of the renowned social worker were offered at Karachi’s National Stadium attended by thousands of mourners including the top politicians and officers of the armed forces.

Chiefs of all three armed forces had reached National Stadium for the funeral prayers. He was laid to rest at Edhi Village in presence of a large number of his admirers with state honour.