Fighting has been raging for weeks for control of Tripoli airport.

The US was “caught off guard” by air strikes against Islamist militia in Libya, a senior official has told the BBC.

The attacks on militia positions around Tripoli airport were reportedly carried out by the United Arab Emirates (UAE) from bases in Egypt.

Egypt has denied any involvement and the UAE has not commented.

A militia alliance recently captured the capital’s international airport after a battle lasting nearly a month.

The official told the BBC that the US had not been consulted about the air strikes and that it was concerned that US weapons may have been used, violating agreements under which they were sold.

The unidentified war planes attacked twice in the past week during a battle for Tripoli’s airport between Islamist and nationalist militias.

A report in The New York Times on Monday said the UAE had provided the military aircraft, aerial refuelling planes and crews while Egypt gave access to its air bases. 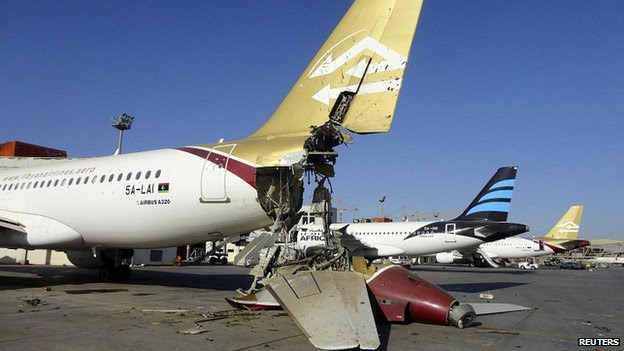 On Monday, the US, France, Germany, Italy and the UK issued a joint statement denouncing “outside interference” in Libya which it said “exacerbates current divisions and undermines Libya’s democratic transition”.