Search
HomeNewsNational
By Web Desk on May 27, 2017 National News

Syeda Anfas Ali, the founder of the Footpath School Karachi, made it her life’s mission to put those exact words into action.

In a country where approximately 1.2 million children either spend their nights on the street or earn a living on the streets to support their families back home, Syeda Anfas’s inspiring initiative seeks to uplift the children who live on the streets, in Karachi and interior Sindh. 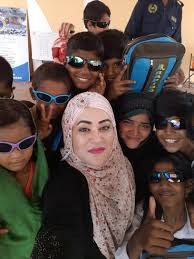 With an estimate of 25 million children in Pakistan being out of school and deprived of a basic human right i.e. education, Syeda Anfas came up with the idea of the Foothpath School.

In the aftermath of the APS School terrorist attack, Syeda vowed that children from poor backgrounds deserved better and it was up to her to do her bit in this regard.

She started by merely gathering one or two children from the streets of Karachi and teaching them by herself and out of her own resources.

Leaving behind her own well-established business and comfortable lifestyle, the founder of the Foothpath School devoted more and more of her time and efforts towards educating, grooming, and ultimately uplifting the long forgotten children of the streets.

What started out as a mere desire to prevent street children from becoming beggars, drug addicts and victims of abuse through education and literacy, has now become known as the Footpath School, with approximately seven branches in various localities of Karachi and interior Sindh.

The challenges, though many, have not deterred Syeda Anfas Ali from carrying out her mission. Even with limited resources and a culture of indifference, Syeda has marched on and worked towards transforming the lives of these unfortunate souls.

Syeda Anfas expects to see more success and transformations in the subsequent years, while her inspiring journey sheds light on the fact that the only way to see a change in the world is by taking the first step.