Israel pressed on with an aerial offensive in Gaza for a third day on Thursday, killing at least 20 people in a major new confrontation with Hamas militants, Palestinian officials said.

The Israeli air force launched raids on more than 300 targets in attacks against Hamas in the Gaza Strip overnight in response to rocket fire, an army spokesman said Thursday.

“We aimed at 322 targets in Gaza overnight, taking to 750 the total number of Hamas targets hit by the army since the start of Operation Protective Edge,” said spokesman Peter Lerner, as quoted by Agence France-Presse.

Among the targets hit were rocket-launching sites of Hamas’s armed wing the Ezzedine al-Qassam Brigades, as well as tunnels used by the group and Hamas command posts, Lerner said.

He warned that a ground assault was still being considered.

Seventy Palestinians have been killed in the violence, more than 50 of them civilians, Palestinian medical officials said according to AFP. No one in Israel has been harmed. 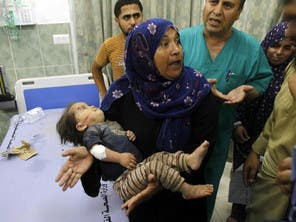 A woman carries an injured child into the al-Najar hospital in Rafah, in the southern Gaza Strip, on July 9, 2014. (AFP)

Israel says its offensive is intended to halt rocket fire at its cities from the Gaza Strip. More than 200 rockets have been fired during the campaign, striking deep into the country’s heartland, it said.

The rockets have caused no serious casualties, but the barrage has paralysed business in southern communities and sent hundreds of thousands of people scrambling for shelter as far north as the Israeli business hub of Tel Aviv and beyond. A rocket struck on the outskirts of Haifa to the north on Wednesday.

Hamas’ armed wing said it fired six rockets at Israel early on Thursday. Confrontations were also reported at sea where Palestinian militants in Gaza said they fired mortars and rockets at Israeli gunboats shooting at the coastal territory.

Israeli media reported air raid sirens wailing in several southern cities. The Iron Dome missile defence system intercepted some of the rockets, while others slammed into the ground without causing any damage or casualties, they said.

Palestinians said Israel has targeted more than 70 homes in its offensive. The Israeli military said on Wednesday it had bombed 550 Hamas sites, including 60 rocket launchers and 11 homes of senior Hamas members. It described those dwellings as command centers. 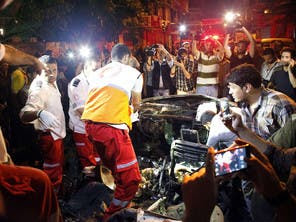 Palestinian rescuers check a car hit by an Israeli air strike killing the driver in Gaza City on July 9, 2014. (AFP)

Meanwhile, U.N. Secretary General Ban Ki-moon said Wednesday that Gaza is on “a knife edge” and that the Middle East faces is currently facing one of its most serious challenges in years.

“I am alarmed by the new wave of violence that has engulfed Gaza, southern Israel and the West Bank – including East Jerusalem. This is one of the most critical tests the region has faced in recent years,” said Ban.

“Gaza is on a knife edge. The deteriorating situation is leading to a downward spiral which could quickly get beyond anyone’s control.”