Key players in talks on Iran’s nuclear programme have warned of big gaps between Iran and world powers, with only a week left to strike a deal.

Arriving in Vienna for the talks, US Secretary of State John Kerry said “significant differences” remain – a view echoed by France and the UK.

An Iranian envoy also said it was not clear if major gaps could be bridged.

The talks seek to persuade Iran to limit its nuclear programme in exchange for the lifting of sanctions.

Discussions on Sunday have been inconclusive.

“We haven’t made the decisive breakthrough,” said the UK’s Foreign Secretary, William Hague. “There are very significant gaps.”

There is growing speculation that the 20 July deadline for an agreement will need to be extended.

An interim deal was reached last year. However, the parties have been unable to reach agreement on imposing long-term restrictions over Iran’s uranium enrichment and plutonium production – processes that could yield material for nuclear warheads.

World powers suspect Iran is seeking atomic weapons. Iran strongly denies the charge, insisting that it is enriching uranium to fuel its power plants, and for medical needs.

A deal could see the lifting of oil and trade sanctions on Iran. 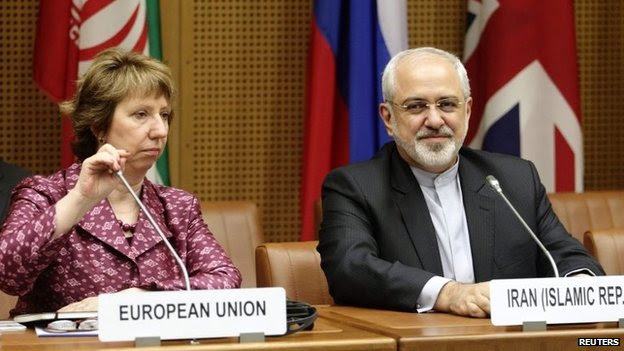 The talks in Vienna bring together Iran and the P5+1 group, comprising the US, UK, France, China, Russia and Germany.

All the countries except Russia and China have sent their highest-ranking foreign envoys.

“Obviously we have some very significant gaps still, so we need to see if we can make some progress,” Mr Kerry told reporters before meeting Catherine Ashton, the EU’s foreign policy chief.

“It is vital to make certain that Iran is not going to develop nuclear weapons, that their programme is peaceful,” he said. “That’s what we are here trying to achieve.”

“We have not been able to narrow the gaps on major issues and it is not clear whether we can do it.”

Earlier this week, Iran’s Supreme Leader Ayatollah Ali Khamenei has said that Iran could eventually need tens of thousands of centrifuges for its nuclear programme.

Within five years, he said, Iran would need far more than the 10,000 that world powers wanted to limit it to.

In his comments on Tuesday, Ayatollah Khamenei also expressed strong support for Iran’s negotiating team in Vienna, a boost to moderate President Rouhani, who has been accused by hardliners of giving to much ground on the nuclear issue.

Also this week, France’s foreign minister has hinted at growing differences between the countries in the talks.

Mr Fabius said the P5+1 group had previously been “very homogeneous” in their dealings with Iran.

But “in recent days representatives in the negotiations have put forward a certain number of different approaches”, he told a parliamentary committee in Paris on Monday.

Both sides are hoping to build on an interim deal agreed in Geneva in November that saw Iran curb enrichment in return for sanctions relief.

But progress since the Geneva deal has been slow, with the last round of talks in May proving unfruitful.

Web Desk
Previous ArticlePunjab govt to give Rs7,000 per month to families of IDPs
Next Article IS seize more territory in Syria from rivals