Search
HomeNewsHealth
By Web Desk on May 18, 2017 Health News

Punjab Food Authority (PFA) is fairly active these days. Other than banning certain food items in school canteens, the authority is also campaigning actively against food items which either cause harm or do not contain any nutritional value, especially for children.

In its most recent public awareness message, PFA informs that a recent government survey shows that 44 percent children in Pakistan suffer from lack of proper nutrition. In its campaign to inform parents about adequate diet and healthy food items for kids, PFA said that instant drinks are bad for growing children. 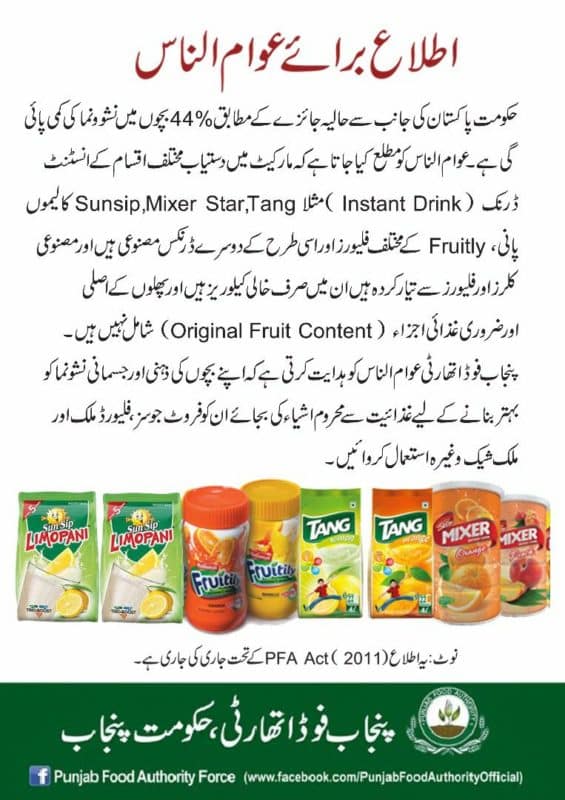 Instant drinks are those which come in powdered form and are mixed with water. According to PFA, Tang, Mixer Star, Sunsip Limupani, Fruitly and any other similar drinks are completely artificial.

Such drinks make use of artificial flavors and colors. One can only obtain calories from such food items as they lack “Original Fruit Content” and any other nutritional content.

The authority recommends that parents should avoid such drinks which have no nutritional value and instead choose fruit juices, flavored milk, milk shakes, etc. for better physical and mental health of their children.

Yesterday, it was reported that the authority is considering to ban fizzy (carbonated) drinks for all underage children across the whole province. Previously, fizzy drinks had been banned in school canteens only.

Implementation will probably begin after the summer holidays and anyone under 18 years of age will not be served carbonated drinks in school cafeterias.

PFA has also approved a set of guidelines where food items are divided into three categories – green, yellow and red – based on their nutritional values and importance. More information regarding that is available here.