LAHORE: While the ongoing Besakhi festival in Gurdwara Panja Sahib Hasan Abdal is the fresh subject of controversy between Pakistan and India, it has indeed proved to be blessing for some.

An Indian woman who had come to Pakistan to attend the ongoing Besakhi festival here as embraced Islam in order to marry a Pakistani man.

Kiran Bala, daughter of Manohar Lal, has written to the ministry of foreign affairs, requesting that she had married with her agreement during a ceremony at Jamia Naeemia, Lahore on April 16.

After the marriage, Kiran’s name was changed to Amna Bibi. Amna said that she wants to tie the knot with Azam, a resident of Hanjarwal, Multan road, Lahore, and doesn’t want to return to India.

Based on these grounds, Amna has requested the authorities to extend her visa so that she can stay in Pakistan. According to her, she is receiving assassination threats and that she cannot return to her country of origin.

Amna had arrived in Pakistan on April 12 with other Sikh pilgrims to attend the festival.

On Tuesday, Pakistan categorically rejected Indian allegations of “attempts to incite Indian pilgrims” on the issue of ‘Khalistan.’ New Delhi had accused Pakistan of attempting to incite the pilgrims by displaying posters at the pilgrimage sites. 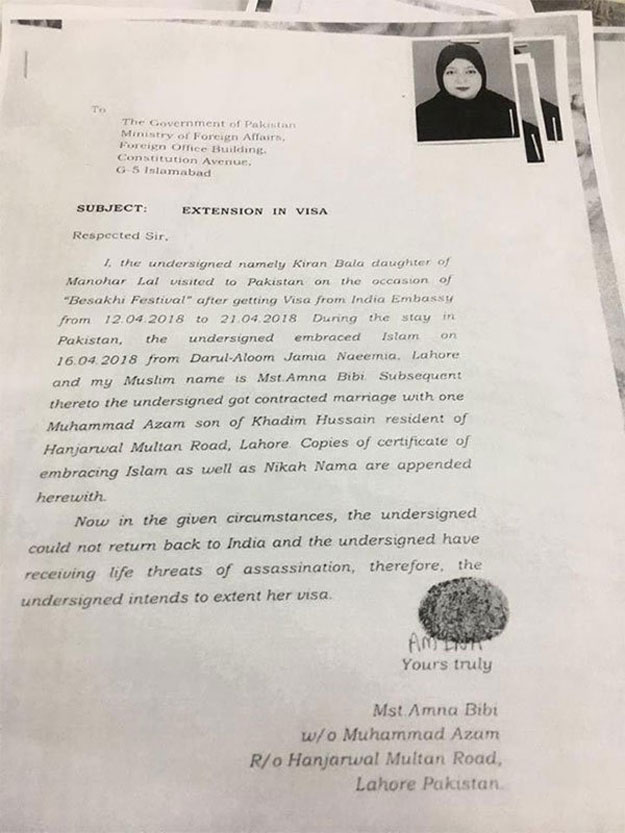