New Delhi Indian Prime Minister Narendra Modi’s visit to Myanmar is threatening to be overshadowed by the escalating humanitarian crisis in the south of the country, as tens of thousands of ethnic Rohingya flee into Bangladeshto escape violence in Rakhine state.

In a joint statement issued by Modi and Myanmar leader Aung San Suu Kyi on Wednesday, the two leaders promised to work together to solve what they termed “a terrorist problem.”
“We would like to thank India for its strong stance with regard to the terrorist threat that came to our country a couple of weeks ago,” said Suu Kyi.
Myanmar officials have long maintained that violence in Rakhine is the result of ongoing terrorist activity and any subsequent security clampdowns are a necessary measure to protect innocent Burmese. According to the country’s state media, the latest wave of unrest was sparked when Rohingya militants killed 12 security officers in border post attacks on August 25. 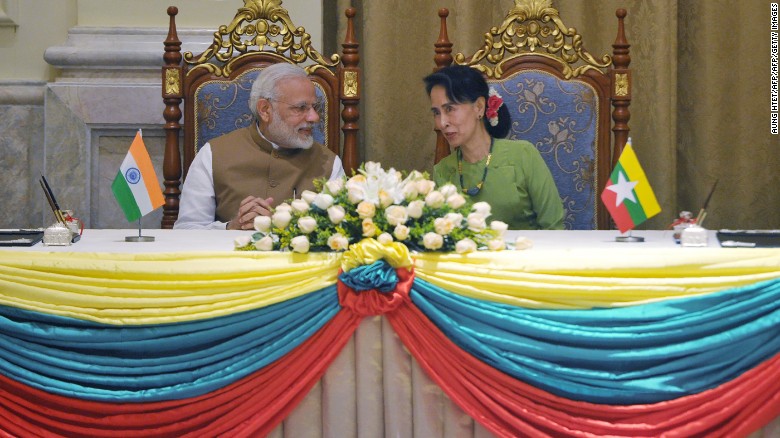 India’s Prime Minister Narendra Modi and Aung San Suu Kyi met in Naypyidaw on September 6, 2017.
“We believe that together we can work to make sure that terrorism is not allowed to take root on our soil or on the soil in any neighboring countries,” added Suu Kyi.
Modi, who is in Mynamar as part of a two-day bilateral visit, supported Suu Kyi’s statement, attributing the violence of the last few weeks to extremists. “We share your concerns about the extremist violence in the Rakhine state and especially the violence against the security forces and how innocent lives have been affected and killed.”
An estimated 123,600 Rohingya have fled into Bangladesh in recent days, according to the United Nations. Many of those crossing the border have brought with them stories of widespread devastation and murder, as the Myanmar security forces deploy alleged scorched earth tactics in the hunt for militants.

As the conflict in Rakhine intensifies, many of Myanmar’s Muslim-majority neighbors have called on the government to halt the ongoing violence and better protect those fleeing.
India, which is home to one of the largest concentrations of Rohingya outside Bangladesh, has a vested interest in preventing the violence and stemming the influx of refugees, but geopolitical considerations have so far kept it from speaking out, say analysts.
“The Modi government has been trying to push its Act East policy and to build a kind of community around the Bay of Bengal, where Myanmar is a key player,” said K. Yhome, a senior fellow at India’s Observer Research Foundation. 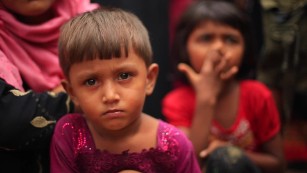 India views Myanmar as a useful ally in the country’s longstanding rivalry with China, as the two countries vie for regional power. “The (Indian) government is not wanting to push the Myanmar regime towards the other side,” added Yhome.
Domestic considerations have also played into India’s relatively muted diplomatic response. On Tuesday, as Modi prepared to touch down in Myanmar, a junior minister in India’s Home Ministry, Kiren Rijiju, told local media that “whether the Rohingyas are registered under the United Nations Human Rights Commission or not, they are illegal immigrants in India … as per law, they stand to be deported.”
Rijiu’s comments follow growing concern within India at the increasing numbers of Rohingya seeking asylum in the country. In April, senior members of the government met to discuss possible mechanisms for the “detection, arrest and deportation” of Rohingya.
It’s not clear whether India is in a position to deport its Rohingya population to Myanmar or Bangladesh. In a statement, the United Nations High Commissioner for Refugees (UNHCR) said they have not received any official communication from the Indian government with regard to its plans on Rohingya, and there are currently no reported instances of deportations of registered Rohingya refugees.

After a short period living in a Bangladeshi refugee camp, Rohingya refugee Nezamudden traveled overland to Delhi in 2013 in search of security. Yet, five years on, he finds that security more fragile than ever. “We are very scared of our deportation,” he told CNN.
The words from the central government against Rohingya have added fuel to the discrimination he says he faces on a daily basis from his Delhi landlord and neighbors.
“They’re saying, ‘you Muslims are terrorists. You’re fighting against your own government. You’re bad people,'” said Nezamudden. “They say this everyday.” 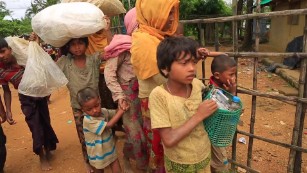 Rohingya Muslims flee violence in Myanmar 02:33
The Indian government says there are around 40,000 Rohingya currently in the country, though that number is contested by the UNHCR, who puts the number closer to 16,500.
The notion that Rohingya are “illegal immigrants” is at least in part perpetuated by the group’s semi-legal status in India, itself a product of the country’s lack of legal framework around refugees.
Guidelines issued by the the Indian Ministry of Home Affairs allow local immigration offices to dispense long-term visas to refugees, but only on a case-by-case basis.
Lawyers representing the Rohingya in India are now attempting to challenge this ruling, arguing that India’s Supreme Court has accepted international law in previous rulings on refugees.
“International law is often incorporated into the judgments of the Supreme Court,” said Colin Gonsalves, a lawyer representing Rohingya refugees in a petition in the Jammu and Kashmir High Court. “The general principle regarding refugees is that a refugee will not be returned to a country where he is likely to face harm or death or be persecuted again.”
In the Indian state of Jammu and Kashmir, where some 7,000 Rohingya have settled, lawyer Hunar Gupta has filed a petition to remove Rohingya, alleging that “they are suspected of being involved in various anti-national activities such as drug trafficking.” 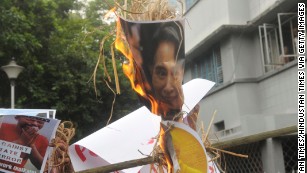 Gupta also claims that “there will be an increase in pro-separatists as well as anti-Indian activities in the state of Jammu and Kashmir,” as a result of the influx of “illegal immigrants from Bangladesh and Myanmar.”
India, though not a signatory to the 1951 UN refugee convention, has historically prided itself on its openness to refugees. An estimated eight million refugees were granted asylum in 1947 in the wake of Partition, with the largest refugee camp being set up northwest of Delhi.
There, the government accommodated some 300,000 people fleeing from what was then West Punjab, providing “100 tons of flour daily, along with large quantities of salt, rice, lentils, sugar and cooking oil,” according to historian Ramachandra Guha. The government even provided entertainment, showing classic Disney films featuring Mickey Mouse and Donald Duck.
About a decade later, India opened its doors again, this time to Tibetans feeling Chinese persecution. And in 1971, when Bangladesh split from Pakistan to become its own country, India once again took in refugees fleeing from violence.
“This notion that there’s an absence of a legal framework to take in refugees, this is nothing more than a sheer fig leaf,” said Sumit Ganguly, a professor of political science at Indiana University.
The real intentions, he said, are rooted in anti-Muslim ideas.
“The use of a broad brush to suggest that all Muslims are terrorists is the most absurd proposition,” he added. “They’re simply using the terrorist bogey in India to justify a policy based in prejudice and hatred.”
Source
Tags: Mayanmar | Muslims | PM MPod | Rohingya | Suu Kyi