ISLAMABAD: Alarm bells have been set off in Pakistan after an Indian man who claims to have extrasensory perception sent a letter to Indian Prime Minister Narendra Modi predicting a cataclysmic tsunami by the end of 2017.

Pakistan’s top intelligence agency has purportedly warned the Earthquake Rehabilitation and Reconstruction Authority (ERRA), the body responsible for disaster management, of a massive underwater earthquake in the Indian Ocean later this year.

The prediction of Babu Kalayil, which has been laughed off by the Indian media, has whipped up panic in Pakistan after his letter to Premier Modi went viral on the social media.

According to a BBC Urdu report, the absurd prediction of Kalayil has been taken seriously by officials in Pakistan as they have started preparations to deal with a possible disaster. 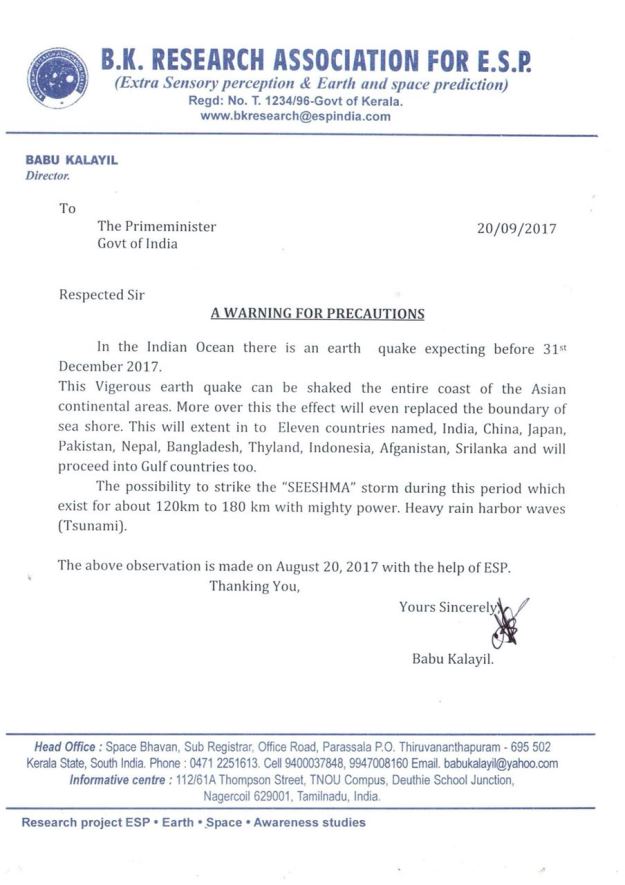 In his letter sent to Premier Modi in September, Kalayil, using his ‘sixth sense’, predicted that a devastating earthquake could shake the Indian Ocean in December 2017 and trigger a massive tsunami which would affect seven Asian countries, including Pakistan and India.

Now, another letter has been making the round on the social media since Friday in which the ERRA acting deputy chairman has purportedly directed that standard operating procedures (SOPs) on the matter may be prepared on a war footing.

“An Information Report has been received from DG, Inter-Services Intelligence [ISI] that there is, reportedly, likelihood of [a]large scale earthquake, as being expected, in the Indian Ocean in near future which may vigorously shake the Asian continental areas, including Pakistan. There is, therefore, a need to sensitise concern[ed]departments to be on [the]vigil and take care of any natural disaster…,” reads the letter.

“The SOPs will be put up to ERRA’s acting deputy chairman by Monday, November 6, 2017.” 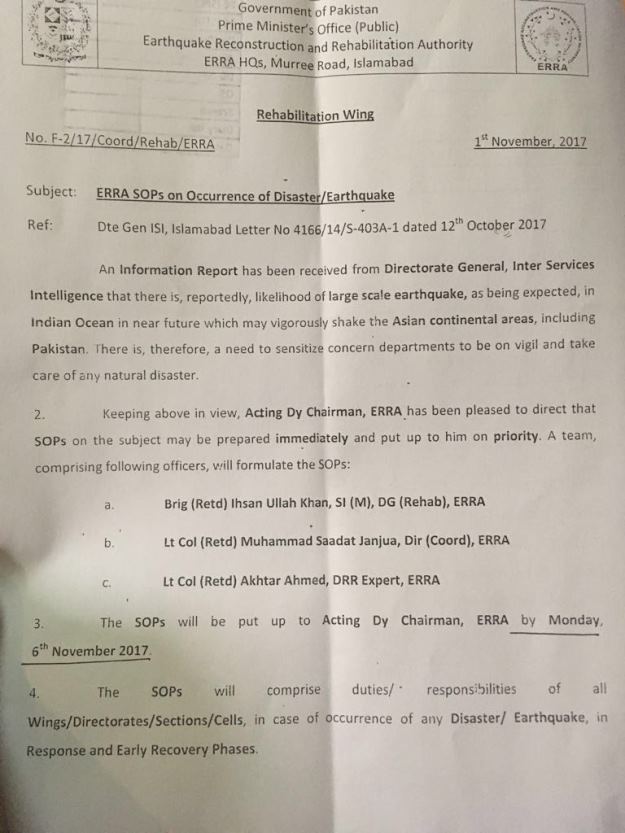 The letter purportedly issued by ERRA.

Nobody from the departments concerned has come out to confirm or rebut it. Despite repeated attempts by The Express Tribune, no official from ERRA, the Pakistan Meteorological Department or the ISI could offer comments on the purported letter.

It is too early to say anything about the authenticity of the letter but it appears to be fake as the ISI has nothing to do with prediction of a natural calamity, according to experts. They say it is impossible to predict an earthquake.

Met Department chief Dr Ghulam Rasool also told BBC Urdu that “this prediction has no scientific justification, albeit, we are preparing to save ourselves from its effects. ERRA has also started its work by writing the letter.”

He said it was not possible to predict earthquakes. “I contacted Japanese experts after this prediction but they were not aware of any technology which could tell about an earthquake in advance,” he added.

The official asserted that if science had not discovered an earthquake prediction technique so far, it did not mean that it would never become possible.

“Therefore, we should not ignore such information and should prepare because there is a threat of an undersea earthquake in this area and there have been tremors here in the past as well.”