LAHORE: Preparations to celebrate the 70th Independence Day of Pakistan are in full swing in the provincial capital.

A large number of stalls have been set up all over the city to sell national flags, buntings, badges and other decorative merchandise. The provincial and district governments as well as educational institutions and art councils have planned a series of events in connection with Independence Day. Flag hoisting ceremonies, seminars, independence walks, folksong performances, dramas on the freedom struggle as well as photographic, painting, poetry and debate competitions have also been planned.

Meanwhile, the Punjab Information and Culture Department (PICD) organised a special radio transmission called ‘Jashan-e-Azadi’, which will air on FM 95. The department has also decided it will display the logo of ‘Main Hoon Pakistan’, a theme to celebrate 70 years of success and independence in Pakistan, on all buildings associated with PICD. 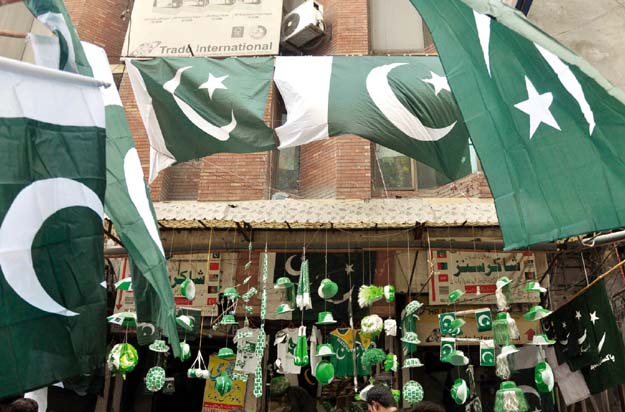 The Lahore Arts Council is building a float to showcase the independence struggle and it will pass through major roads to highlight events related to the Pakistan Movement on August 14.

The Punjab Council of Arts has also prepared a cultural float which will be sent to Balochistan on Independence Day for celebrations. It will reflect the historic and colourful culture of Punjab. At the same time, the government has also made arrangements to illuminate important buildings and monuments.

Authorities in Punjab have planned special functions at the provincial, district, divisional, tehsil and union council levels. The government will also organise a city parade.

Punjab Schools Education Department (PSED) has also finalised preparations. According to its spokesman, the department has planned a series of events that will be organised throughout the province. On August 14, special prayers will be offered for peace and prosperity of the country after Fajr. National flags will be hoisted on school buildings and different functions will be organised in schools to teach students about the historic background of the Pakistan Movement.

The spokesperson said the department would also organise walks in which teachers, students and members of minority communities would participate. The Punjab Food Authority (PFA) has also planned cooking, decoration and cleanliness competition among hotels and restaurants. It will distributed prizes among the top performers.