KARACHI: Meenakshi Ganguly, the South Asia director at Human Rights Watch (HRW), has urged the Indian leadership to admit that human rights violations are taking place on their side of the Line of Control (LoC), and they must work with Pakistan to find a solution that puts the interests of Kashmiris first.

Speaking to Vaqas Asghar, host of the Tribune 24/7 programme “Media Watch”, the rights activist said it is about time leaders in both India and Pakistan realised that Kashmiris are living in a conflict zone and suffering human rights violations.

“They must understand and acknowledge this and ensure that human rights of these people are not violated anymore. It needs to happen right now … this should be about Kashmiris who are suffering.”

Ganguly regretted the fact that human rights issues are often ignored in Pakistan-India peace and not given the importance it deserves. “Whenever we start talking about Kashmiris’ rights the topic turns to militancy which leads to demands from one side and demands from the other and the whataboutery of the two parties as they try and justify their actions because of the actions of the other, which does not help,” she said.

Commenting on the current situation in the occupied valley, she said the Indian government has rejected reports by Amnesty International and OHCHR (Office of the United Nations High Commissioner for Human Rights) recently issued on atrocities being committed by the Indian security forces.

“Once again we find out that Kashmiris are the ones having to pay the price for the political battle that goes between India and Pakistan,” she added, stressing that the focus should be diverted to protect the human rights of the Kashmiris.

When asked to comment on misuse of special powers given to the Indian military, Ganguly said that not only the international organisations like the United Nations (UN) but groups and commissions, formed under the Indian government and mandated to try and find solution to the Kashmir issue, have also appealed to the government to repeal the act.

“There is no reason for this law to exist and there is evidence that it led to violations of human rights,” she added.

Commenting on role rights groups like Amnesty and OHCHR can play to make India more accountable over Kashmir issue when Modi government is targeting almost all ethnicities in the country, the HRW official said the voice of dissent should not become the political tool.

“Unfortunately this is what happens way too often not necessarily in India only but in other parts of the world including Pakistan that every time you speak about human rights it sounds like you’re trying to justify one party’s views against the other,” she said. 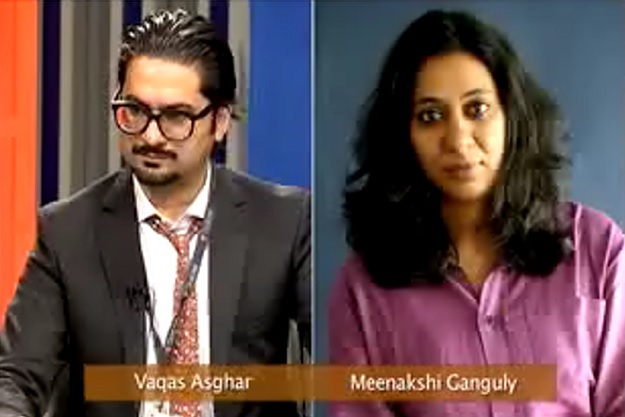 “Yes, it is true that Kashmiri pundits have had their rights violated which should’ve been protected, but this does not mean that what is going on in Kashmir valley should be ignored. And that’s what we are finding in India that this has become the discourse.

“Any kind of dissent and criticism is treated as anti-national, there are crackdowns on people who speak out and this is really really unfortunate because unless the government is responding to these calls for justice, there will continue to be a cycle of violence against innocent women and children protesting on the streets of Kashmir.”

Commenting on increasing communal violence by pro-BJP vigilantes against religious minorities in the country, Ganguly said the environment of an extreme form of nationalism violates religious freedom, adding that the situation was concerning and she was “very very worried”.

When asked if Kashmir was also a victim to such more violence promoting Hindu supremacy and ultra-nationalism recently, she said: “For a very long time Kashmir was not looked through the religious prism but unfortunately more recently the fact that Kashmiris are Muslims is used to criticise them and to deny them their rights.”

The HRW official stressed the need to protect rights of Kashmiris at all costs like everyone else’s in the world. “Human rights are universal”