ISLAMABAD — A Saudi-led Muslim military coalition, commanded by a celebrated former Pakistan army chief, will be officially launched on Sunday when Riyadh hosts defense ministers of the participating nations at its inaugural meeting.

Saudi Crown Prince Mohammed bin Salman, Defense Minister of Saudi Arabia, will open the meeting of the Islamic Military Counter Terrorism Coalition or IMCTC, said an official statement issued on the eve of the event.

The statement explains that the “pan-Islamic coalition” of 41 predominantly Sunni Muslim countries will coordinate and multiply their individual efforts in the global fight against terrorism and violent extremism.

“The meeting [in the Saudi capital]marks the official launch of the IMCTC and strengthens the cooperation and integration of member countries in the coalition,” it reads.

While supporters dubbed the Saudi-led coalition the “Muslim NATO,” skeptics, including those in Pakistan, continue to question its objectives and see it as a sectarian-based grouping against rival Shi’ite Iran, Syria and Iraq.

Saudi officials announced formation of the coalition in 2015, headquartered in Riyadh, with a mission to fight terrorism, particularly to counter the threat of Islamic State.

Tehran has opposed the move from the outset, however, and has been lobbying against it, believing it is aimed at increasing Saudi influence in the region.

The coalition’s formation specifically has been the focus of debate in Pakistan after former Pakistani military chief Raheel Sharif was appointed as IMCTC’s first commander. 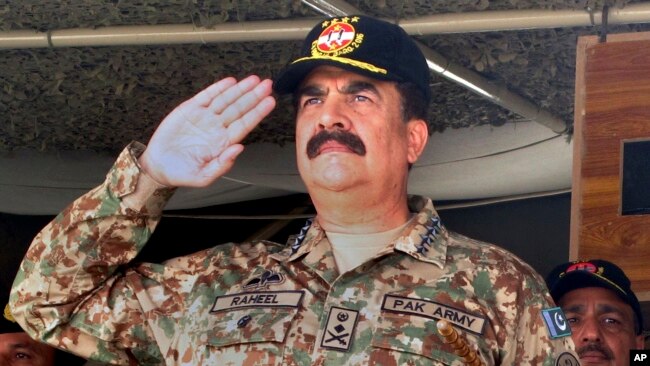 Critics have warned that Islamabad’s participation could upset the country’s minority Shi’ite community and undermine bilateral relations with Iran, which shares a nearly 1,000-kilometer border with Pakistan.

The Pakistani Senate — upper house of parliament — witnessed another heated debate on the issue this week where opposition members urged the government not to give any undertakings in Sunday’s meeting in Riyadh without taking the parliament into confidence.

A day after IMCTC’s inaugural meeting, Pakistani Prime Minister Shahid Khaqan Abbasi, Army Chief General Qamar Javed Bajwa and head of the country’s main spy agency, ISI, among others also plan to visit Riyadh on Monday at the invitation of the Saudi leadership for important consultations, although it is not known exactly what the issues are.

“If the IMCTC turns out to be a Saudi platform to bash geopolitical enemies and advance sectarian narratives, then this country [Pakistan] would best stay away from such a misadventure,” warned the leading English language newspaper, DAWN, in an editorial Saturday.

The newspaper noted with concern the Saudi crown prince’s statement issued Friday in which he dubbed Iran’s supreme leader “the Hitler of the Middle East.”

In its announcement ahead of Sunday’s meeting, the IMCTC quoted its commander, General Sharif, as saying that terrorism is the biggest challenge confronting the Muslim world.

“The IMCTC encompasses an integrated approach to coordinate and unite on the four key domains of ideology, communications, counterterrorism financing, and military, in order to fight all forms of terrorism and extremism and to effectively join other international security and peacekeeping efforts,” Sharif said.

The general retired in November 2016 and is credited with effectively countering terrorist groups operating in Pakistan during his three-year tenure as the chief of the powerful military.

But Shi’ite community leaders and independent critics in Pakistan have criticized the government, as well as Sharif, for accepting the assignment, fearing it would fuel domestic sectarian rivalries.

Pakistan has always walked a tightrope while trying to maintain a balance between its immediate neighbor, Iran, and also Saudi Arabia. The Saudi Kingdom hosts hundreds of thousands of Pakistani expatriates, and is a key source of oil supplies to Islamabad on deferred payments and cash grants to help Pakistan’s traditionally struggling economy.

The Pakistan government, under extreme domestic pressure, had refused to join Saudi-led military operations against Iran-backed Shia Houthi rebels in Yemen in 2015.

The parliament barred then-prime minister Nawaz Sharif from joining the operation, saying Pakistan’s involvement in a foreign conflict would exacerbate sectarian tensions at home and upset its friends in the Muslim world.

Web Desk
Previous ArticleArmy will not participate , We should not use the power against our own people : COAS Gen Bajwa
Next Article Rohingyas fear returning as Rohingya repatriation pact signed between Bangladesh, Myanmar