Chief of the Army Staff (COAS) General Qamar Javed Bajwa, while speaking to the students on the eve of internship completion at ISPR, has urged the young generation to avoid spreading hostile ideas on social media. Bajwa warned the Pakistani youth to be wary of the extremist organisations like the Islamic State group saying that they are their prime targets.

He visited the Directorate on Thursday and congratulated the students on completing their internship from July 11 to Aug 17.

The COAS said that youth is the future of Pakistan and that this generation has the talent and ability to steer Pakistan towards an era of progress and peace. 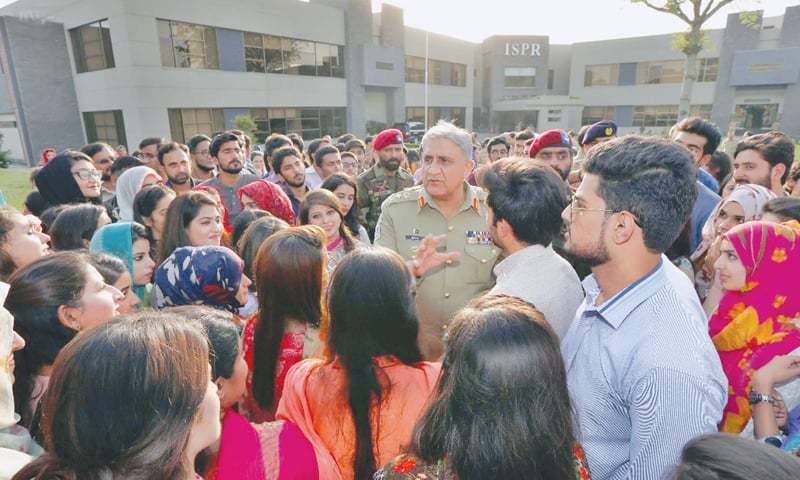 The Army Chief persuaded the students to follow the rules, avoid shortcuts, stick to the merit, trust their abilities, and advised them to realise their full potential for the greater good of Pakistan.

Talking about his motivation to boost the morale, he said that his uniform and the confidence in youth has kept him going during the tough times.

He assured the young generation that Pakistan Army was trying its best to make Pakistan peaceful and that they will make it secure and stable for everyone.

Talking about the latest operation, Radd-ul-Fasaad, and rules for success, he said,

Every Pakistani is a soldier of Raddul Fasaad operation. Your success and progress in life depends on three things: faith in Allah, serve your parents and hard work. This trinity is key to success.