HILLA, IRAQ: A woman detonated her explosive belt in a market east of the Shia holy city of Kerbala on Friday, killing at least 30 and wounding 35, Iraqi security sources said. 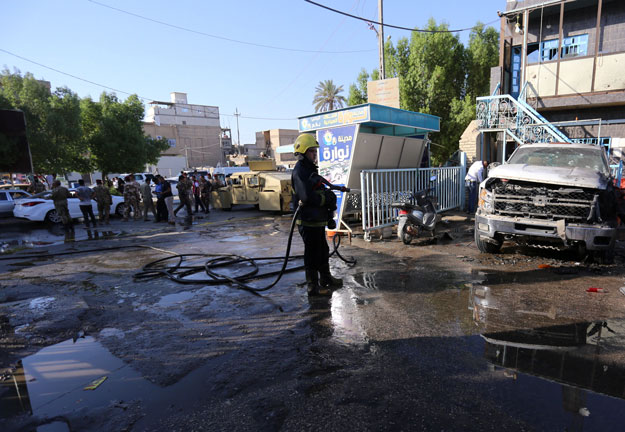 A firefighter hoses down a street after a suicide bomb attack in the city of Kerbala, Iraq June 9, 2017. PHOTO: REUTERS

Islamic State claimed the attack in the town of Musayab, south of Baghdad, in a statement on its Amaq news agency. It didn’t name the bomber. A security officer said the assailant was a woman who hid the bomb under the customary full-body veil.

The attack comes as Islamic State is about to lose Mosul, the de-facto capital of the hardline Sunni Muslim group in Iraq, to a US-backed Iraqi offensive launched in October. The group is also on the backfoot in neighbouring Syria, retreating in the face of a US-backed Kurdish-led coalition attacking its capital there, Raqqa.

Iranian-backed paramilitaries are taking part in the campaign fighting Islamic State in Iraq, attacking the group in the border region near Syria. Islamic State declared a self-styled ‘caliphate’ over parts of Syria and Iraq three years ago.