AHMEDABAD: Narendra Modi’s tallest claim at the end of his almost 13-year reign as Gujarat chief minister was flawless law and order situation in the state, but for the blemish of Godhra riots. “After 2002, Gujarat has not seen violence,” he would often say.

After Modi’s flight to New Delhi five months ago, the fear factor is gone. Goons and bootleggers are toying around with Gujarat police, often attacking them in public. Communal violence has resurfaced in recent months and clashes have been reported in Vadodara, Ahmedabad, Bhavnagar and other places.

Almost as if the rule of law is gone, the men in khakhi are at the receiving end with criminals mounting brazen attacks on police in Ahmedabad, Vadodara and most recently in Dabhel in south Gujarat where three policemen were injured in a mob attack on Tuesday. This came close on the heels of the Eid incident at Shahpur in Ahmedabad, where the mob snatched a pistol from a police sub-inspector and allegedly tried to lynch him.

In Vadodara, where sporadic mob violence has been reported in recent weeks, cops were openly targeted.

Only recently, a gang of bootleggers thrashed cops when they raided a den in Gomtipur, Ahmedabad.

P C Thakur, state director general of police, claims police are not taking the incidents lightly. “We have applied sections of attempt to murder (IPC Section 307) in all such incidents where police officers and personnel have been assaulted brutally. The citizens have to respect the police and vice versa to maintain peace,” he said. 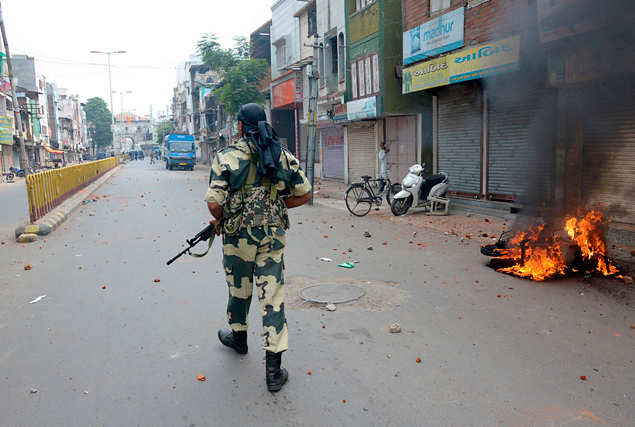 Communal violence has resurfaced in recent months and clashes have been reported in Vadodara, Ahmedabad, Bhavnagar and other places. (Reuters photo)

Senior officials blame the loss of respect for the law on a leadership crisis at the state and city level. Rapid reaction cells, which exist in every range, remain inactive. Local crime branches and vigilance squads of DGP office are also dormant. Top-level politics between senior IPS officers at key posts is also a reason behind the worsening situation, believe many.