Facebook has stopped showing Friend List feeds and some are totally unbothered about it while few are relieved because the feature was kinda useless.

Friend List Feeds was actually customized news feeds that showed posts from a group of Facebook contacts that Facebook users chose. Basically, this feature was a way to read updates from specific Facebook friends in a separate News Feed within the app.

Found inside the menu on Facebook app, Friends List Feed enabled users to view posts from only specific friends in a specific group.

Facebook informed a few users by sending them messages that Friend lists feed will be going away from Facebook soon and Facebook is doing this to improve main newsfeed experience of users as reported by TechCrunch.

While the users can still create, edit and share to their friends’ lists as Facebook is keeping the lists, users, however, won’t be able to view the custom feed from the list of friends which means you can not see posts from only those people you added to the lists.

Facebook was not so famous for copying back then when it copied this feature from Google+ to only find out that not many users were interested in this customized newsfeed feature. 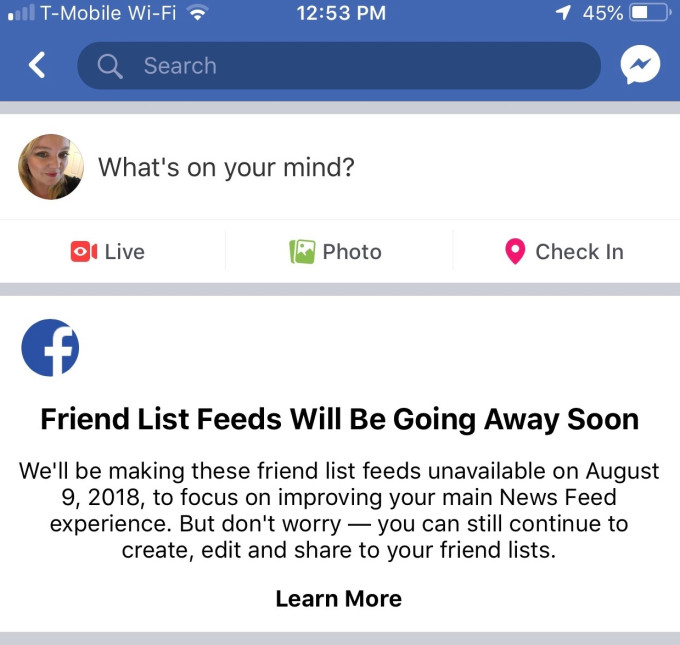 Facebook launched “Friend Lists Feature almost a decade back in 2009 and in 2011, the social media giant showcased Smart Lists that were based on networks such as education or work experience. This intended to make Newsfeed experience of users more customized. Facebook created smart lists automatically by extracting specific information from your profile such as a smart list of your contacts based on the university you attended. Facebook also lets people create their own lists.

But after a long time i.e 9 years, Facebook decided to get Facebook rid of the Lists. There are a number of other features now available on Facebook to customize your Newsfeed such as snooze features that let you temporarily mute someone’s posts for a specific time duration from your timeline.