Russia launched new military exercises near its border with Ukraine on Thursday, showing no sign of backing down in its plans to annex its neighbor’s Crimea region despite a stronger than expected drive for sanctions from the EU and United States.

“We would not only see it, also as neighbors of Russia, as a threat. And it would not only change the European Union’s relationship with Russia,” she said in a speech in parliament. “No, this would also cause massive damage to Russia, economically and politically.”

U.S. Secretary of State John Kerry said a serious steps would be imposed on Monday by the United States and Europe if a referendum on Crimea joining Russia takes place on Sunday as planned.

Merkel, a fluent Russian speaker who grew up in Communist East Germany, has emerged in recent days as a leading figure in threatening tough measures against Moscow. 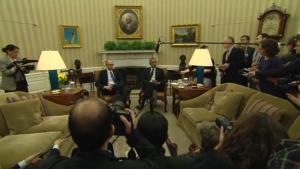 Her foreign minister, Frank-Walter Steinmeier, said European states would draw up a list over the weekend of Russians who will face visa restrictions and asset freezes.

President Vladimir Putin declared Russia’s right to invade its neighbor on March 1, even as Russian troops were already seizing control of Crimea, a Black Sea peninsula with a narrow ethnic Russian majority and a Russian naval base.

The pace of events has moved rapidly, perhaps signaling an effort by Moscow to turn the annexation into a fait accompli before the West could coordinate a response.

Away from Crimea, fighting broke out in the eastern city of Donetsk after rival rallies staged by pro-Russian and pro-European demonstrators and 10 people were hurt. Pro-Russian demonstrators shouted “Russia, Putin!” and hurled eggs, bottles and other projectiles at rival demonstrators.

But in an apparently conciliatory move, Russia backed deployment of an OSCE monitoring mission in Ukraine, including Crimea, the chairman of the European rights watchdog said. 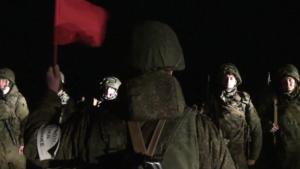 Pro-Moscow separatist politicians, who took power in Crimea after armed men seized its parliament on February 27, are planning to hold a referendum on union with Russia on Sunday. Western countries say the vote is illegal.

Russia has taken territory from its former Soviet neighbors in the past with no serious consequences – most recently in 2008 when Putin invaded Georgia and seized two breakaway regions. But if Putin was hoping for a similarly tepid response this time, he may have misjudged.

In particular, he seems to have alienated Merkel, the Western leader with whom Putin – a German speaker once based as a KGB spy in Merkel’s native East Germany – has had the closest relationship in the past.

Merkel was initially more cautious than other Western leaders in responding to Russia’s seizure of Crimea, but has emerged in recent days as among the toughest critics of the Kremlin, pushing the European Union to match U.S. sanctions. 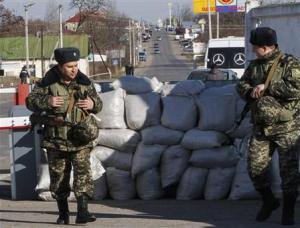 EU action is critical because Europe does 10 times as much trade with Russia as the United States, buying most of Moscow’s gas and oil exports.

The prospect that EU measures could be implemented as soon as Monday has weighed down the Russian economy.

Goldman Sachs revised its prediction for Russian economic growth this year down to 1 percent from 3 percent, blaming the tension over Ukraine for fuelling capital flight that would cripple investment. It said $45 billion had already left Russia this year, mostly Russians stashing money abroad.

The Russian stock market hit a four-and-a-half-year low on Thursday and is down 20 percent since mid-February. The cost of insuring Moscow’s debt against default rose to its highest level in nearly two years. 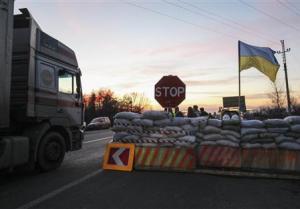 The crisis has already forced several Russian firms to put plans on hold for public offerings to raise cash abroad.

Yet none of that appears to have slowed down Putin, who told officials of the Paralympic Games he is hosting in Sochi that Russia was “not the initiator” of the crisis.

It was the second big military exercise Moscow has ordered since the crisis began; the first, involving 150,000 troops, began days before Russian forces seized Crimea and ended three days after Putin declared his right to invade.

In a gesture of support for NATO’s eastern members after Russia’s intervention in Ukraine, U.S. F-16 fighter jets landed at Poland’s Lask air base on Thursday. 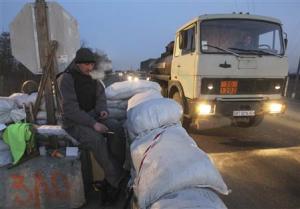 Among efforts by the West to isolate Russia politically, the Organization for Economic Cooperation and Development, a 34-member rich nations’ club, announced it was suspending membership talks with Russia, under way since 2007.

Russia has pledged to respond in kind to any Western sanctions.

But European leaders appear to be calculating that the damage to Russia would be far worse than to Europe. EU-Russian trade makes up 15 percent of Russia’s economy and just 1 percent of Europe’s. Although EU countries depend on Russian gas imports, storage tanks are full after a mild winter season.

Diplomatic lines have been open between Russia and the West throughout the crisis: U.S. Secretary of State Kerry and Russian Foreign Minister Sergei Lavrov spoke on Thursday as they have nearly every day. They are due to meet in London on Friday.

A Ukrainian businessman who had wide influence under Yanukovich, Dmytro Firtash, was arrested in Vienna at the request of the United States, which has been investigating him since 2006.