60 people were injured following a strong earthquake that hit the town of Murmuri in western Iran on Monday, Iranian state television said, the Associated Press reported.

State television placed the earthquake at a magnitude of 6.2, while the U.S. Geological Survey, which monitors quakes worldwide, earlier placed it at 6.3. 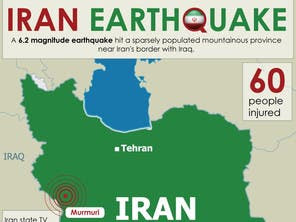 Mohammad Reza Morvarid, the local governor, said 60 people were injured and that because minor quakes were felt in the area on Sunday, the residents were somewhat prepared.

“Many people slept outdoors,” Morvarid said, adding that “many buildings have been damaged.”

“Fortunately there have been no reports of deaths so far but there have been injuries and a great deal of material damage,” a Red Cross official told Iranian state television.

The quake hit Murmuri, about 500 kilometers from Tehran, at a depth of 10 kilometers at 02:32 GMT, according to the channel. IRNA state news agency earlier reported the quake to be a 6.1.

Iran sits on a series of seismic fault lines and experiences one slight quake a day on average.

In 2003, some 26,000 people were killed by a magnitude 6.6 quake that flattened the historic southeastern city of Bam