A Dutchman honoured by Israel for hiding a Jewish child during World War Two has handed back his medal after six of his relatives were killed in an Israeli air strike on Gaza.

Henk Zanoli, 91, wrote to the Israeli embassy in The Hague to say he could no longer hold the honour.

He said an Israeli F-16 had destroyed his great-niece’s home in Gaza, killing all inside, in the recent offensive.

The Israeli embassy has declined to comment on Mr Zanoli’s action.

Mr Zanoli and his mother were awarded the “Righteous Among the Nations” honour by Israel in 2011 for helping to shelter a Jewish child from the Nazis in their family home from 1943-45.

The award is accorded to non-Jews who risked their lives to protect and save Jews during the Holocaust.

However, Mr Zanoli said in a letter published by Israel’s Haaretz newspaper that “to hold on to the honour granted to me by the State of Israel under these circumstances, would be an insult… to those in my family, four generations on, who lost no less than six of their relatives in Gaza.” 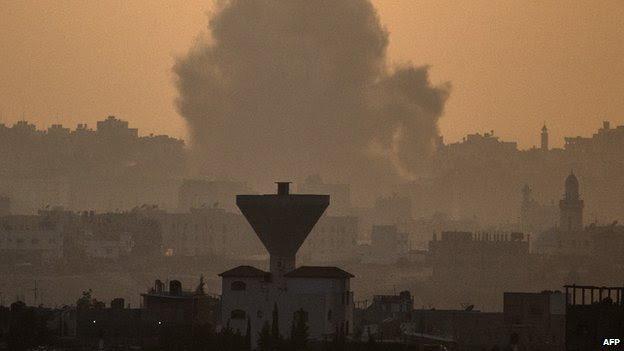 The UN says more than 2,000 people – mostly Palestinian civilians – have died in recent fighting between the Israeli military and Palestinian militants in Gaza

His great-niece is a Dutch diplomat who is married to Palestinian economist Ismail Ziadah, who was born in a refugee camp in central Gaza.

Mr Ziadah’s mother, three brothers, a sister-in-law and nine-year-old nephew were all killed after their family home was hit by Israeli aircraft.

Mr Zanoli, a retired lawyer, offered sharp criticism of Israel’s Operation Protective Edge offensive, warning that such actions could lead to possible convictions of “war crimes and crimes against humanity”.

Israel has defended its offensive in Gaza, saying its forces had gone to “unprecedented lengths to keep Palestinians out of harm’s away” by issuing warnings via text message, telephone and leaflet dropping.

Mr Zanoli has faced his own share of family tragedy after losing his father at a Nazi concentration camp and a brother-in-law who was killed for his role in the Dutch resistance during World War Two.

“Against this background it is particularly shocking and tragic that today, four generations on, our family is faced with the murder of our kin in Gaza. Murder carried out by the State of Israel,” he wrote in the letter addressed to Israeli ambassador Haim Davon.

He was reportedly too frail to hand the medal back in person, but instead sent it to the Israeli embassy in the Netherlands.