A Dutch court has ruled that the Netherlands was liable for the killings of more than 300 Bosniaks (Bosnian Muslim) men and boys at Srebrenica during the war in July 1995.

It said that Dutch peacekeepers had failed to protect the Bosniaks when the town fell to the besieging Bosnian Serb army. More than 7,000 were killed.

Bosniaks who had taken refuge with the Dutch were handed over to the Serbs.

Last year, a Dutch court ruled that the Netherlands was liable for the deaths of three Bosniak men at Srebrenica.

During the war, Bosniaks from the surrounding area sought refuge in the town of Srebrenica as the Bosnian Serb army carried out a campaign of ethnic cleansing, expelling non-Serb populations. 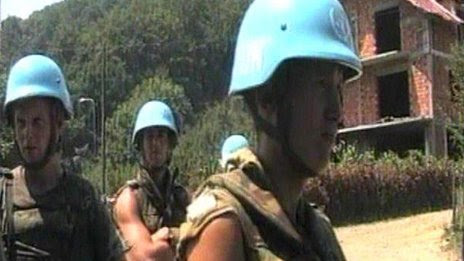 A battalion of Dutch peacekeepers was stationed at Srebrenica in 1995

The UN declared Srebrenica a “safe area” for civilians in 1993. It fell in July 1995, after more than two years under siege.

Thousands of Bosniaks went to the UN base just outside Srebrenica at Potocari, where the Dutch peacekeepers were stationed.

However, the Dutch soldiers told them they would be safe and handed them over to the Bosnian Serb army.

While the women and young children were transported to a Bosniak-majority area, more than 7,000 men and boys were taken away from the UN base by the Bosnian Serbs, and killed.

Many of their remains still lie in mass graves around eastern Bosnia.

The two key figures of the wartime Bosnian Serb leadership – one-time President Radovan Karadzic and General Ratko Mladic – are on trial for war crimes at the UN tribunal in The Hague.