KARACHI: Former Petroleum Minister Dr Asim Hussain was released from prison after 19 months on Friday. The Sindh High Court had issued orders for Dr Asim’s release after he furnished his passports that were being held by the Anti-Terrorism Court (ATC) in connection with another case.

After the court ordered his release, Hussain was shifted from the Jinnah Post Graduate Medical Complex to the Ziauddin Hospital. 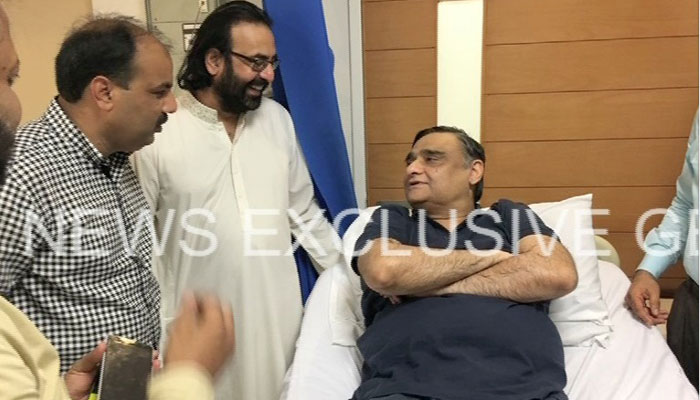 Earlier, Dr Asim Hussain’s legal team had moved the high court to amend the requirements for furnishing bail, however, on Thursday the court had rejected the application. When the ATC returned the passports being held in a case regarding aiding treatment for criminals, the accused was able to furnish them before the high court and secure bail.

Along with his passports, Dr Asim has secured bail after submitting surety bonds to the value of Rs 5,000,000.

Dr Asim, a close aide of former president and PPP co-chairman Asif Ali Zardari, faces several charges including corruption references filed by NAB of Rs 479 billion. He is also alleged to have provided treatment and protection to terrorists at a hospital owned by him.

According to NAB, Dr Asim created an artificial shortage of gas during his tenure as a result urea fertiliser prices skyrocketed and touched Rs1830 from just Rs850.

Due to this, the government provided a subsidy on urea import which caused Rs450 billion loss to the national exchequer from 2012 to 2013.

Dr Asim also acquired land illegally for the establishment of Ziauddin Hospital, according to the NAB document present in court in May last year.

In a video clip in June 2016, he levelled serious allegations against PPP’s Owais Muzaffar alias Tappi, accusing him of being involved in corruption. However, he maintains he was tortured to extract a confessional statement.

In an interview with a private TV channel, Zardari had said Dr Asim was his childhood friend and family doctor and incapable of committing corruption and providing medical help to terrorists.

Dismissing allegations of corruption on Dr Asim, he said the former served as a state minister and likened him to an ‘innocent rabbit’ who is afraid of his own shadow. The PPP leader, like in the past, had vowed to defend his friend on all platforms. He also visited Dr Asim in January this year at the National Institute of Cardiovascular Diseases to inquire about his health.