ISLAMABAD: Prime Minister Nawaz Sharif on Monday faced a fresh challenge to his authority after the Joint Investigation Team (JIT) probing offshore assets of the ruling family indicted him, saying “he is in possession of assets beyond known sources of income”.

The panel also disclosed that the prime minister was the chairman of a board in another offshore company, FZE Capital UAE, but he concealed the fact while filing statutory returns or making declarations before the authorities concerned in Pakistan – be it filings before tax authorities or Election Commission of Pakistan.

Legal experts believe that after the damning report, it is not easy for the prime minister to escape disqualification under Article 62(1)(f) of the Constitution.

After two months of investigation, the six-member JIT, led by FIA’s Additional Director General (immigration) Wajid Zia, submitted its report consisting of 10 volumes before a three-judge special bench of the Supreme Court on Monday.

The report has found that the prime minister and his family failed to produce the requisite information confirming ‘known sources of income’ which “is prima facie tantamount to not being able to justify assets and the means of income”. 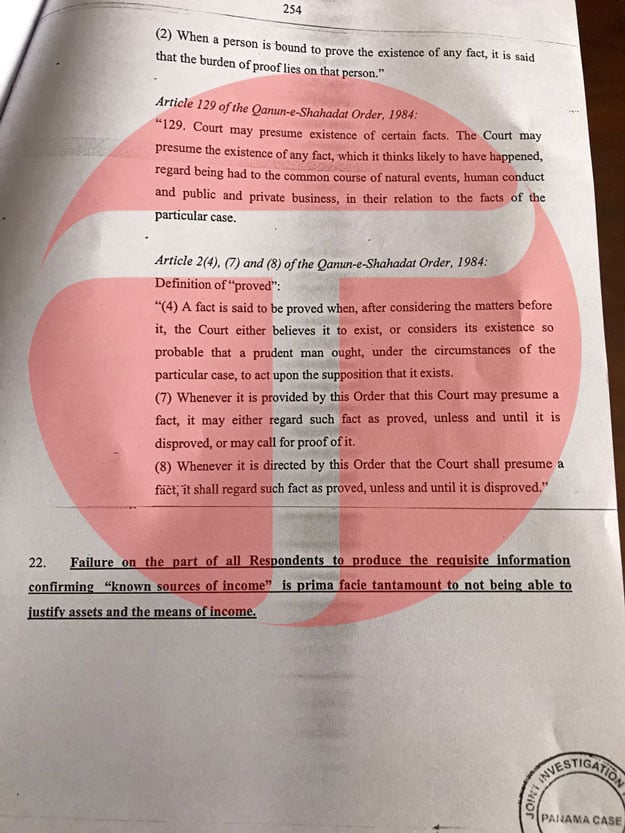 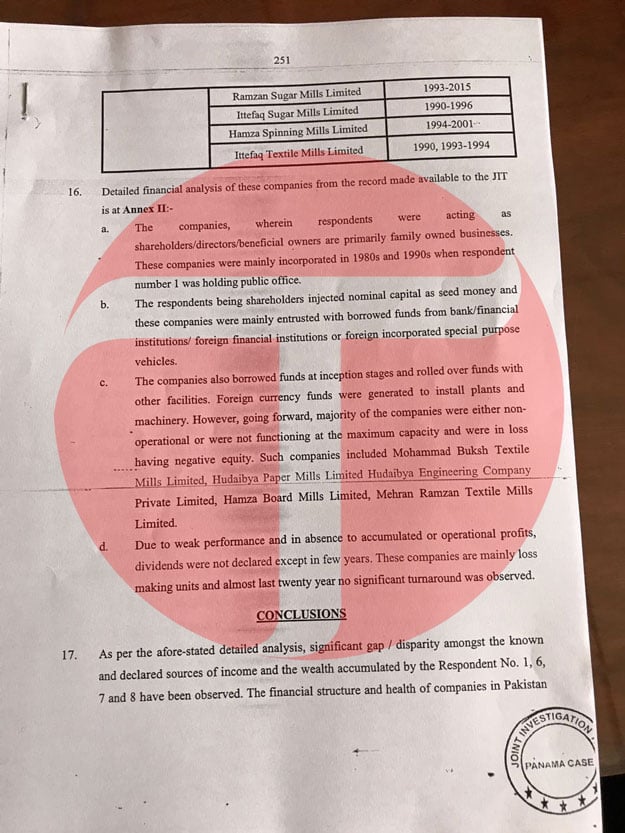 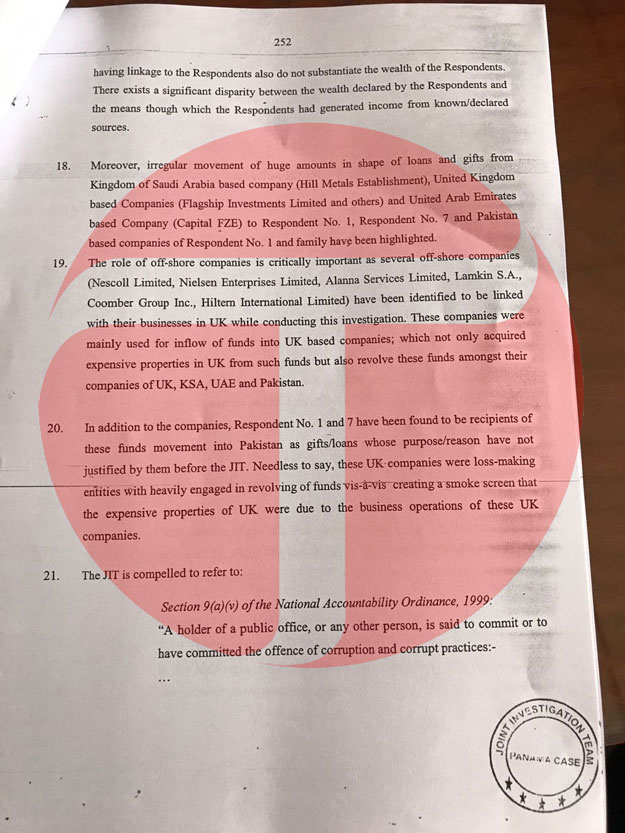 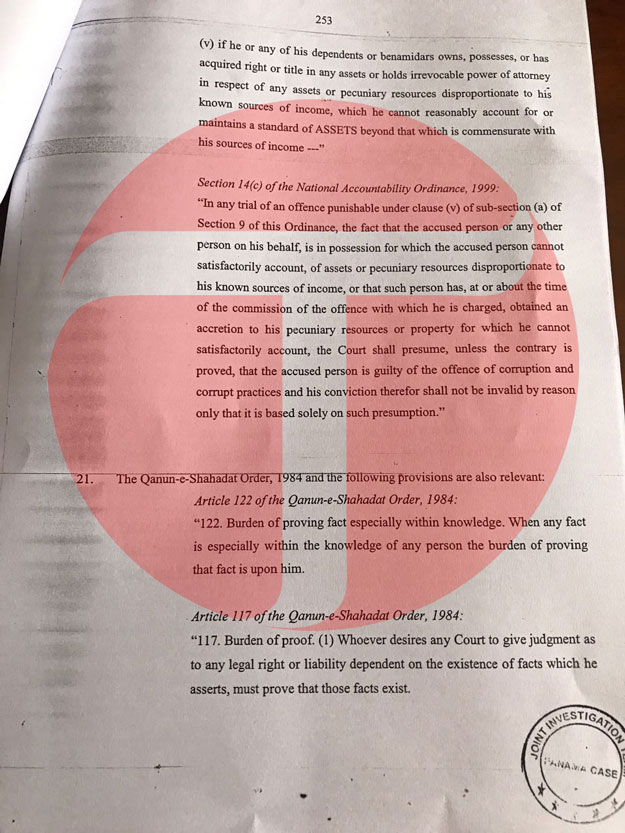 After receiving the report, the special bench allowed the petitioners and the respondents in the case, and the attorney general for Pakistan to obtain copies of the report from the Registrar Office.

Directing the counsels from both sides to appear in the court on Monday, July 17, for further hearing, the bench also instructed the government to continue providing security to the JIT members until further orders. Likewise, the court also warned that no action could be taken related to their jobs without its approval.

Legal experts say the bench will examine whether the prime minister can be disqualified on the basis of the JIT report or not.

The JIT, in its 254-page report, stated that a total of 28 witnesses had been summoned and examined in multiple sessions who were either related to or acquainted with the facts of the case.

The JIT report says the Sharif family submitted selective documents, which are also severely lacking in substance, adding that the Federal Board of Revenue (FBR) did not provide complete tax returns of Finance Minister Ishaq Dar.

However, the report suggests that the National Accountability Bureau (NAB) should open a ‘reference’ or case against members of the Sharif family.

The JIT in its conclusion says that there was “irregular movement of huge amounts in [the]shape of loans and gifts” from companies based in Saudi Arabia, the United Kingdom and the United Arab Emirates to the prime minister and his Pakistan-based companies.

“The role of offshore companies is critically important, as six companies have been identified to be linked with the Sharif family business in the UK while conducting this investigation,” the report says.

“These companies are mainly used for the inflow of funds into the UK-based companies, which not only acquired expensive properties in the UK from such funds but also revolve these funds amongst their companies in the UK, the USA, the UAE and Pakistan,” it adds.

Likewise, the JIT says, “Having gone through financial details of his companies/banks and his declaration in the Federal Board of Revenue (FBR) record, it seems that the respondent No 1 [PM Nawaz Sharif] is in possession of assets beyond known sources.”

It also found that after the Sharif family’s political rejuvenation in 2007-08, funds were shifted from their UK and UAE empires to Pakistan in the forms of gifts in excess of Rs880 million.

“Substantial funds were transferred in the accounts of the prime minister in the forms of gift(s) from his son Hussain Nawaz and accounts of the Hill Metal Establishment (a leading steel company in Saudi Arabia) taking advantage of tax exemption on foreign remittances.”

It is also stated that the Sharif family had failed to substantiate their source of income behind those gifts abroad if compared with the account details of their companies abroad, adding their companies were in losses, under liabilities and were not in position to generate any dividend.

The probe team also states that “though the Sharif family shows that the prime minister has confined his role to that of an equity holder only in the family-owned business who does not hold any formal position or role in running the business and is not a director on any board.

“Apparently, the objective of his stance [is]to distance himself from a formal role in running the businesses in the strictest regulatory and legal sense.

“However, on the other hand, it is evident that he is enjoying pecuniary benefits other than the dividends from these businesses in the shape of unexplained inflows in his personal bank accounts, on a fairly regular basis from the business profits of his son(s) and businesses run by him purportedly as gifts.”

The report also points out that the prime minister in his tax return in 2013 had claimed that he made a donation of Rs100 million to the PML-N and concealed the fact that he received back Rs45 million from the same party account before the close of the relevant financial year “that amounts to misdeclaration of wealth”.

The JIT also rejected the prime minister’s claim that his business empire was based on the inherited money from his father who owned millions of rupees in the 1970s.

“A financial analysis of Mian Muhammad Sharif does not substantiate his claim. An exorbitant hike in the build-up of his tax returns is not commensurate with his growth which leads to the presumption that this empire is based on [il]legal monetary sources.

“An anomaly of opening benammi accounts in the name of Qazi family, Saeed Ahmad, etc., and the source of inflow in these accounts was not clarified by the respondents (the Sharif family).

“These benami accounts were used as collateral for acquisition of loans and also for moving funds abroad to build the Sharif family’s assets in Pakistan as well as in the UK.”

The report also reveals that it has been seen that the prime minister kept shares in the names of his wife, sons and daughters who were not financially independent at that time.

“Despite adverse financial position(s) of all closely-held family businesses, the prime minister has [seen]a phenomenal growth in the accumulation of wealth by his direct family and other shareholders of the company, which were also his family members.”

The JIT also believes that the prime minister’s sons’ assets show a drastic hike in the early 1990s with no declared source of income, as this was the period the Sharif family was part of the ruling elite.

Therefore this build-up of assets was through irregular means and Hassan was used as a “proxy to build family assets”.

Regarding Finance Minister Ishaq Dar, the JIT says that all of [his]wealth statements were not provided, adding in his wealth statement in 2008/09, an increase of 91 times in his assets was seen — from Rs9.11 million to Rs831.70 million.

“This exorbitant leap in his asset is not clarified/supported through any plausible financial documents.”

Web Desk
Previous Article4G is the Future of Pakistan and Zong 4G will Make it Happen. Liu Dianfeng, CEO Zong
Next Article Your children can ‘catch’ stress from friends and teachers in school