ISLAMABAD: Advisor to the Prime Minister on National Security and Foreign Affairs Sartaj Aziz released a statement on Tuesday expressing his deep concern over the recent escalation of ceasefire violations at the Line of Control and Working Boundary by Indian security forces.

“For seven days now, the Indian security forces have been firing and shelling across the Line of Control and Working Boundary. Yesterday, was Eid day but the Indian forces, in complete disregard of the festive event, carried on the fire and put four innocent lives to death,” he said in the statement released by the Ministry of Foreign Affairs.

“It is sad that the Indian government has not been able to restrain its forces despite strong diplomatic protest by Pakistan. We call upon Indian government to immediately cease fire and shelling and help us preserve tranquility.”

The statement comes the same day it was reported that a woman was killed and two other people were injured as Indian troops resorted to ‘unprovoked firing’ in Charwa Sector near the Sialkot working boundary.

Pakistan strongly protested against the firing and shelling by the Indian side for the past two days to the United Nations Military Observer Group in India and Pakistan (UNMOGIP) , according to ISPR.

In his statement, Azis urged that the UNMOGIP “be enabled to play its due role in monitoring ceasefire to secure peace and tranquility on the Line of Control and Working Boundary.”

The advisor said that Prime Minister Nawaz Sharif’s government  has been exercising utmost restraint and responsibility.

“We also extended a hand of friendship to India. However, with abrupt cancellation of Foreign Secretary level talks, the Indian side has shunned all our peace overtures. We hope that the Indian side would give peace a chance,” he said, adding, “We have often called for making full use of the channels available like hotline between DGs MO and Sector Commanders’ meetings. Unfortunately, all our efforts to secure peace and tranquility on the Line of Control and the Work Boundary have elicited no cooperation from the Indian side.”

He went on to add that cease fire at the LoC and the Working Boundary must be preserved in the larger interest of the region and the people of the two countries.

Khan on Tuesday at the UN General Assembly Plenary said that the United Nations Military Observer Group in India and Pakistan (UNMOGIP) should play its role in monitoring the ceasefire.

“Pakistan is pursuing a policy of constructive engagement in the neighbourhood to resolve differences,” he said. 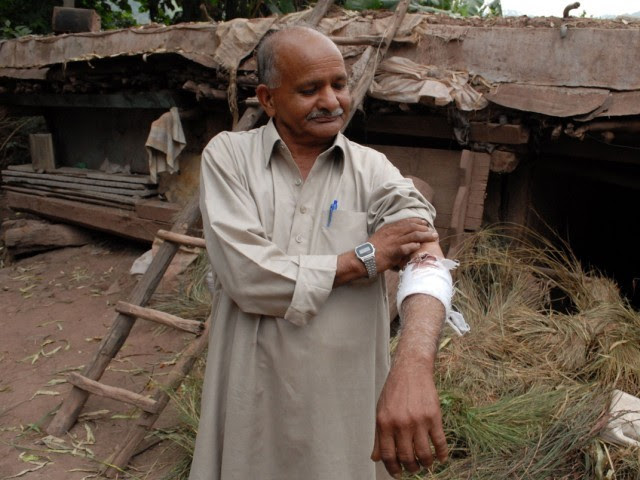 A Pakistani Kashmiri shows his wounded arm from firing across the Line of Control (LoC) between Pakistan and India in Durra Shair Khana on October 7, 2014. PHOTO: AFP

Two people were killed in the in Chaprar Sector due to the cross border firing by the Indian security forces while three others were injured in Sajeet Garh sector of Sialkot area as a result of shelling.

As many as 20,000 people have so far migrated from the area due to the on going exchange of fire between Pakistani and Indian border forces at the working boundary.

Earlier, Advisor to the Prime Minister on National Security and Foreign Affairs Sartaj Aziz released a statement on Tuesday expressing his deep concern over the recent escalation of ceasefire violations at the Line of Control and Working Boundary by Indian security forces.