This year, I was lucky enough to travel to the extremely beautiful Northern Areas of Pakistan, now known as the region of Gilgit-Baltistan. I witnessed the stunning wonders of nature first-hand, from the unnervingly blue waters of Attabad lake to the mighty snow-peaked mountains surrounding the Khunjerab Pass to the picturesque views of Nanga Parbat from Fairy Meadows.

Yet, it was never really enough to quench my thirst of nature. Maybe, it was because I was restricted in a way. I went with a trip of eighty people and didn’t have my own personal means of transport, having to rely on the trip’s management’s designated schedule and places. It left a lot to be desired.

After coming back home, I came across a Pakistani photographer on Instagram who, in order to truly experience the true beauty of the Northern region of Pakistan, had found a way to circumvent this restriction.

Throwing caution to the winds, he had hopped on his bike and went on all the way to the very end of Pakistan on his two-wheeler. Fortunately enough, for us, this certain biker is as good with his camera as he is on his bike.

A mechanical design engineer by profession, Usman Zubair is a traveler photographer by passion. He freelances in both the fields.

“It is possible to pursue multiple carriers if you have the heart for it.”

Usman resides in Multan, and turned 25 this year. He has always wanted to explore as much of the world as he possibly can, photographing everything while he has the chance.

“I wanted to start from my home — Pakistan,” said Usman, while talking to me. “We run abroad for our holidays, not really getting to explore our own home and the beauty hidden here.”

Usman’s Instagram profile is breath-taking, featuring magnificent sunsets, mesmerizing valleys and some of the most beautiful places this country has to offer.

His portraits of the local people from Northern areas deserve a mention of their own. He is also an exceptional videographer, converting his travels in beautiful short videos that can be viewed on his YouTube profile.

But what really caught my eye was his latest adventure — a 3,000-kilometer journey, alone, on his bike, passing through Utror, Lowari, Shandur pass and Babusar pass, exploring Kumrat, Kalash, Broghil and Valleys of Ghizer. Impressed by his commitment to his passion, I reached out to him to know more.

“I took a solo journey to Skardu and Hunza in April for the first time, traveling alone gives me the freedom to go where my heart wants to take me without worrying about anyone else. It gives me pure freedom and that’s why I love it,” shared Usman about his decision to go alone.

When you go with a group, people want the travel dates to be fixed. They want a day to day plan, a complete itinerary, a list of places they are going to visit. They have places to be when they come back, meetings to attend, errands to run.

“I don’t travel like that,” says Usman. “Besides, when you travel alone, you get a better chance to interact with local people and get to know them and their culture.”

Usman began his journey from Multan on a train at 4:30 pm on the 19th of August with his bike, reaching Rawalpindi the next morning. He hit the road right away, only stopping for breakfast when he reached Abbottabad. By 9 pm that day, he was in Kalam. After a good night’s sleep, he was on his way again early next morning. 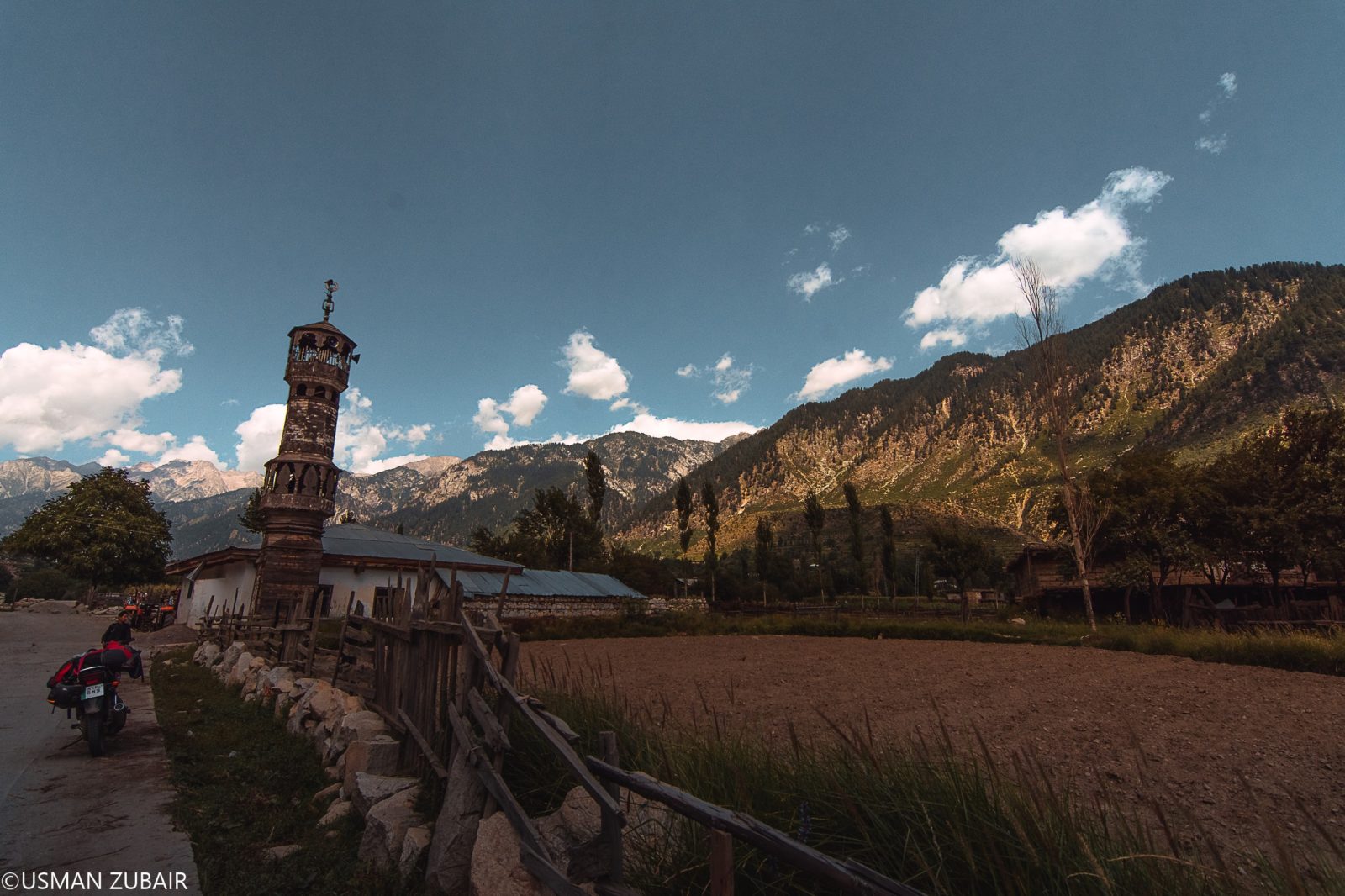 Caption: Mosque on the way to Kumrat Valley

That day, he faced his first major obstacle due to his bike, a Yamaha YBR125, on the Utror Road. Due to the steep road, his bike’s engine lost its power, struggling hard to get up the steepness. Undeterred, he took out the air filter, and that fixed the problem.

“In 30 minutes I was at the Utror top, which connects Swat valley with Dir, Kohistan and leads to Kumrat Valley, a beautiful valley with dark wild forests.” 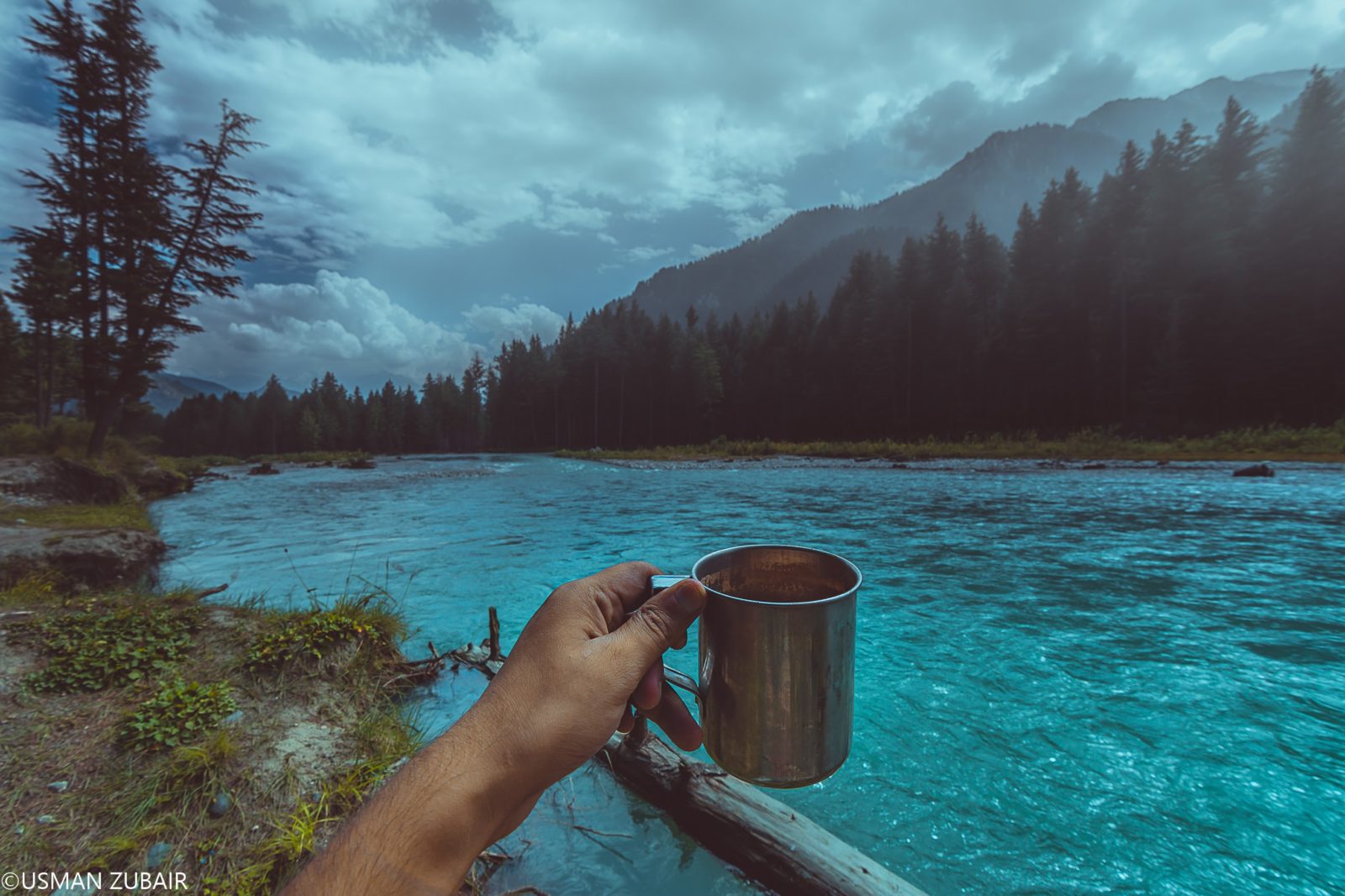 After resting for a while and making halwa and tea for lunch on a stove he took with him, he set off again, reaching Lowari Tunnel, a group of two partially completed road tunnels that traverse the Lowari Pass, when it started getting dark.

The biggest nightmare was the dust in the tunnel! It was dark so I couldn’t shut the mirror of the helmet, so I had to drive with the visor open.

Somehow, he managed to cross the tunnel and made it to the beautiful Kalash Valley that night, and camped there. The following day, he had the first chance to actually explore and spent the day wandering through the valley before going to Chitral. The next stop was Broghil Valley, a national park located in the upper northern region of Chitral but he needed an NOC (No Objection Certificate) to visit the place.

It took me 3 days to get an NOC. During this time, I visited the garam chasma near the Afganistan border, which is famous for natural hot water springs.

He left Chitral on the 24th of August, spending the night in Mastooj. He left for Broghil Valley on a patchy jeep-track the very next morning. His destination now was Karambar Lake, which requires a 2-day trek on foot.

“I also love to capture the stories of people I meet on my journeys because they are the only friends I have when I travel solo.” 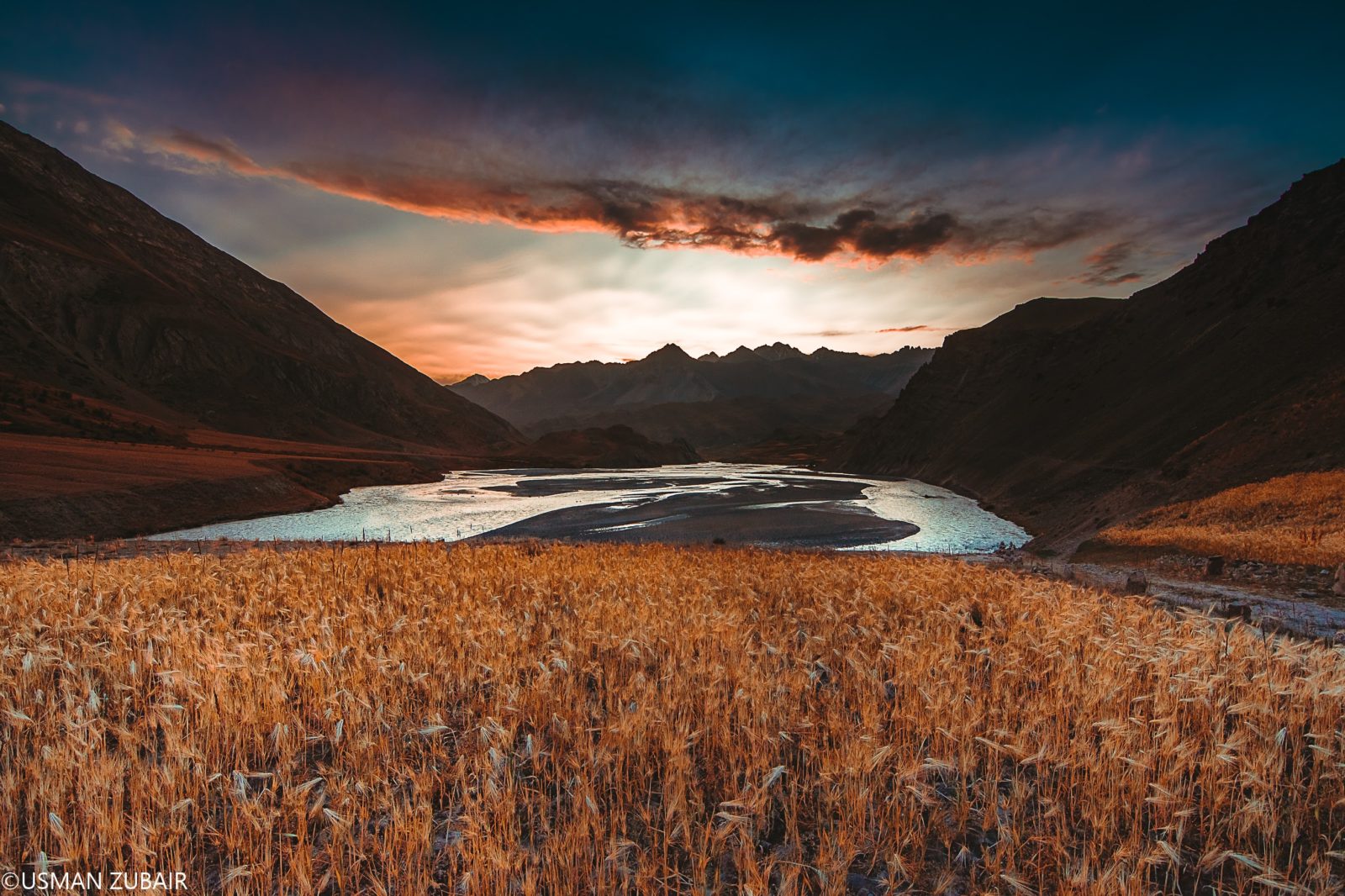 Caption: On the way to Lashkargaz, the basecamp for Karambar Lake.

He left his bike in a village on the way, there and continued his journey on foot. The night was spent at Lashkargaz. It took 8 hours of walking on foot and another hour on a horse to finally reach the lake. Tired to the bone, he decided to spend the night in the last village before the lake.

However, on the way to the village, it started to snow with strong winds and the visibility became very low. Thankfully, he did manage to reach the village and took shelter in stone houses, as strong winds roared outside.

The next morning, when I woke up and went outside, all the surrounding peaks were white and it was a beautiful sight to behold. 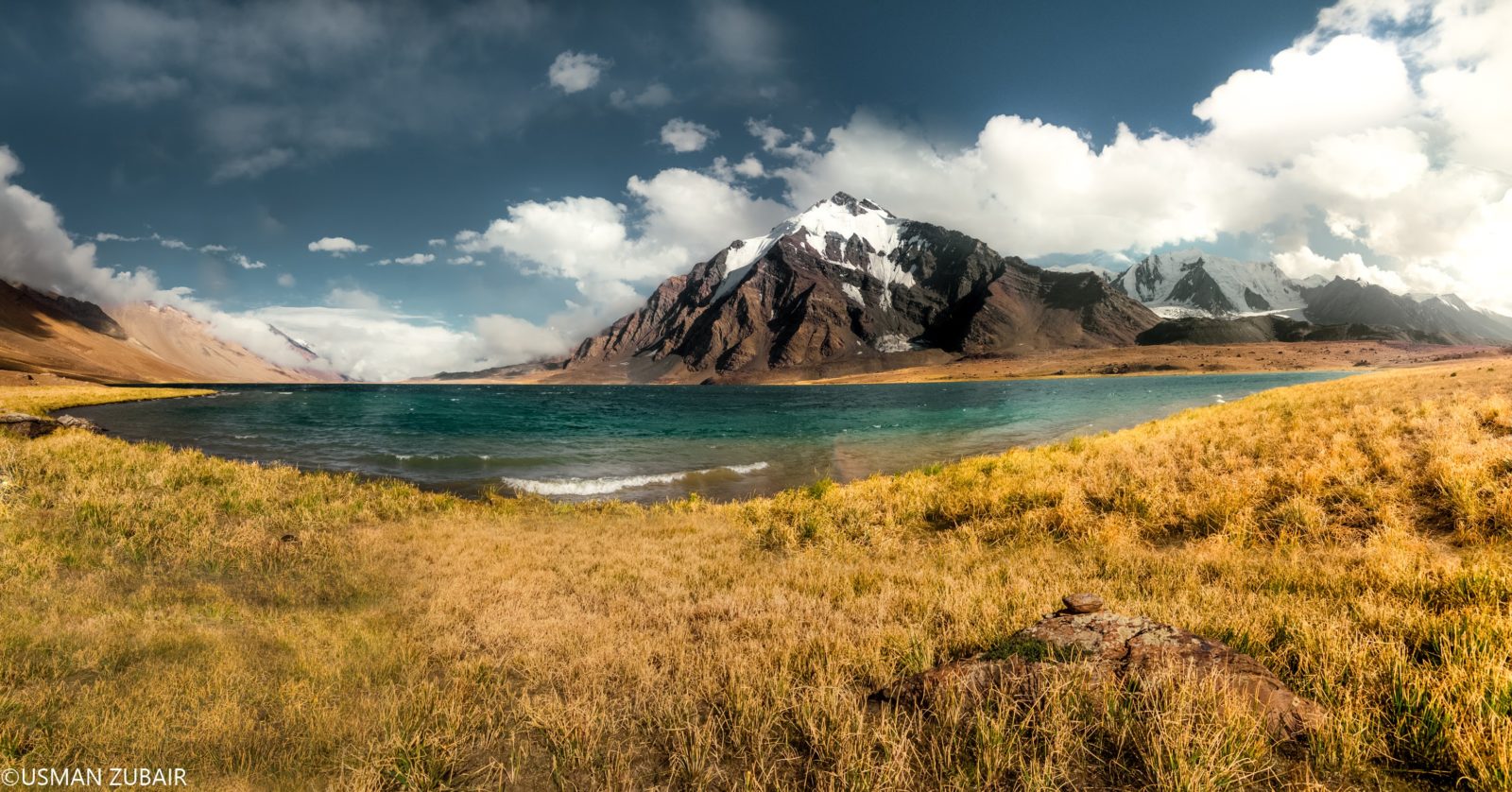 That was the farthest he had planned to go and it was the end of his journey forwards. Four days later, Usman was back in his home in Multan. His hunger for travel, satisfied, at least for a while.

Here is a list of some of the equipment Usman used along with his views on them, 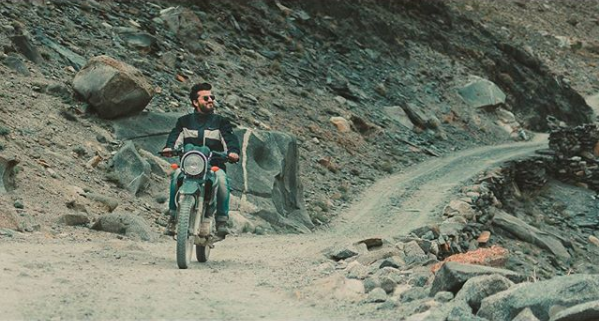 My family supports me in whatever I do. The most important thing is to have their trust.